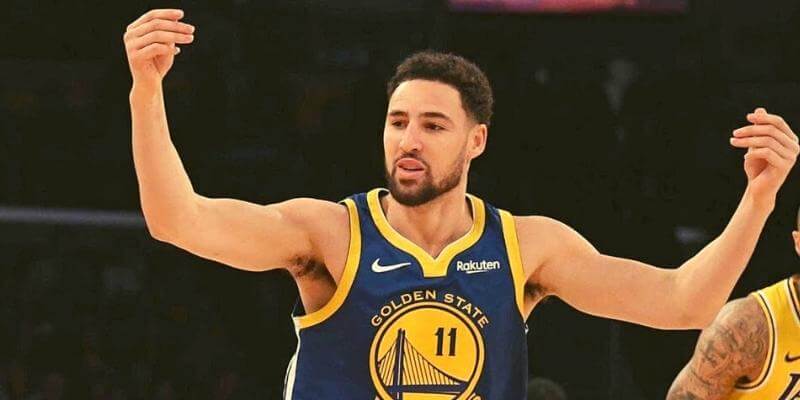 There are many ways to measure an NBA player’s athleticism, but wingspan has become a more popular measurement as of late. While organizations have always put a huge focus on height and weight, they now also analyze reach when studying an athlete’s dimensions.

This article looks at Klay Thompson’s wingspan and breaks down the different ways it informs his game. That shows both how his reach helped him turn into a league-wide superstar, as well as why longer arms help athletes succeed at the top level.

When looking at Thompson’s dimensions, he’s got a good amount of size on other players at his position. While his height (6’6) falls right in line with the NBA average for shooting guards, his wingspan (6’9) and weight (220) are both far above everyone he faces off against.

In fact, his 6’9 wingspan is three inches above the NBA average. That extra length makes a huge difference, and gives him the ability to reach, steal, pass, block, defend, and shoot in ways that similar guards with shorter arms simply cannot match.

The Advantage of Arms

Basketball is a height-focused game, but all size helps. Every single inch a player has over their opponent gives them a noticeable advantage. That’s especially true for outside or wing players, as the size discrepancies are often so much larger than they are with forwards or centers.

Being bigger as a point guard or shooting guard goes a long, long way, especially if an athlete has a larger arm-to-body ratio. That’s because, where height and weight are largely one-dimensional, long arms can often make up for the other two.

Thompson’s arms are three inches longer than his height. That’s not an extremely large discrepancy, but it’s enough to give him an advantage over other 6’6 guards who don’t have the same reach.

Being able to shoot from a much higher point than a defender, or being able to reach into a passing lane to deny a key assist is what makes Thompson so useful. He’s not just a fundamentally skilled player, he’s an impressive physical specimen as well.

Where many of today’s shooting guards are all about scoring, Thompson has always set himself apart in that he can also play excellent defense. He’s undoubtedly one of the best shooters to ever play the game, but his stout effort when defending the basket helps a lot too.

There aren’t a lot of two-way players in the modern NBA. Thompson broke that mold, and his reach certainly helped in doing so. Where a lot of guards are either stout defenders or straight up shooters, he played both roles extremely well.

Part of that ability came from his inherent athleticism, while some of it came from his reach. Being able to go above, around, and over people both with and without the ball gives him the ability to score, block, and defend in ways that don’t happen on the outside wing.

Reach is one of the most important, and yet most overlooked, aspects of the NBA. Almost everyone in the league is large, fast, or quick, but it’s much rarer for players to have. That’s one physical aspect that truly sets Thompson apart.

He’s undoubtedly a great guard due to his defense and shooting. His longer arms aren’t the only reason he’s able to play at such a high level, but they are certainly a big part of why he’s able to do things so many similarly-sized guards simply cannot.