Kobe Bryant vs. Michael Jordan: Who is Better 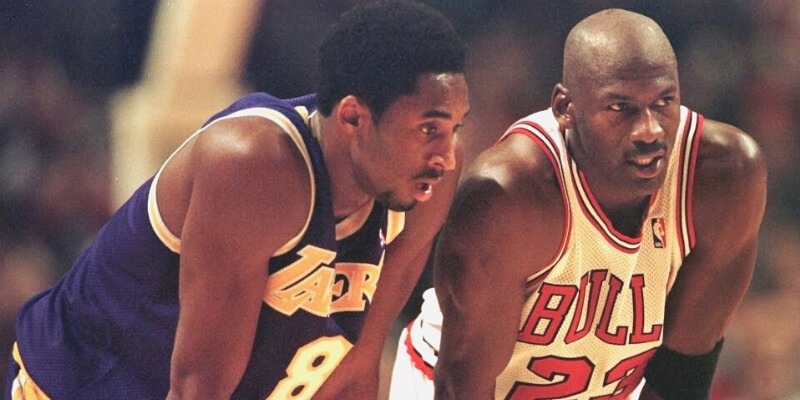 The Kobe vs. Jordan debate has always been heated among basketball die-hards. Both players are mythic figures in basketball circles. Fans of both have their arguments for their ‘guy.’

But sometimes showing love means you don’t always consider the cold hard facts: their results on the court and the eras in which they played. The most interesting angle to this debate is how Kobe blatantly mirrored Jordan’s game on the court.

I could dissect this debate until I am blue in the face, but let’s at least scratch the surface in this article. Looking at each player’s most critical factors and comparing them on paper will give us a clearer picture. I may not change any minds, but at least we can objectively answer the question Kobe vs. MJ: Who is Better?

Kobe Bryant burst onto the scene in 1996, coming out of high school to be drafted 13th to the Charlotte Hornets. He never played a minute for Charlotte as he was traded immediately to the Lakers on draft night. Bryant’s career started slowly, especially during his first two years. By year four, however, he was putting up almost 30 points a game. His Lakers team, led by him and NBA Hall of Famer Shaquille O’Neal, were in the midst of a three-peat. Kobe became a star.

He was often overshadowed by Shaq, with critics wondering if Kobe could win a title on his own. By 2004, Shaq was gone—the Lakers became Kobe’s team. Bryant upped his scoring average and won his only MVP in 2008 but still hadn’t won an NBA title without O’Neal. This all changed in 2009 as the Lakers captured repeat titles behind Kobe’s leadership.

He never got a chance to play for another title after this, but he still excelled on the court until his retirement. His final game is legendary in its own right: Kobe put up 60 points, the 6th 60-point game of his career, in his farewell game, cementing his legacy as one of the greatest players in NBA history and one of the top three beloved Lakers ever.

After Bryant’s career ended, he became a renaissance man of sorts. He began mentoring younger players, including Trae Young and Jayson Tatum, and became softer after retirement. Bryant also excelled in the entertainment world. He started a production company and even became the first African-American to win a Best Animated Short Oscar for ‘Dear Basketball.’

Sadly, his life was cut short in 2020. He and his daughter were tragically killed in a helicopter accident. Fittingly, they were heading to his daughter’s basketball game, where Kobe was her coach.

Michael Jordan was destined for greatness before he even entered the league, hitting one of the most famous shots in NCAA Championship history to win the 1982 NCAA title. When he went to the NBA in 1984, he made an immediate impact on the court for the Chicago Bulls. During his rookie year, he averaged 28 points, taking the NBA by storm with his athleticism and highlight-reel dunks.

Jordan’s early career, like Kobe’s, was met with criticism. People wondered if he was a “me first” guy who only cared about scoring because of the numbers he put up. His most famous early career rivalry was against the ‘Bad Boy’ Pistons and had people asking the question: would Jordan ever win the big one?

That all changed in 1991, when the Bulls won their first title, beating the Lakers. The Bulls would win two more in a row, leading to Jordan’s shocking retirement from the sport. After a brief stint playing baseball, Jordan came back and rattled off three more titles before hanging it up a second time. His accolades continued to pile up, winning MVP awards eleven years apart, displaying his greatness over a decade.

Jordan returned (again!) in 2001 to play two years with the Wizards. While many remember this stint as a fall from greatness, Jordan still averaged 23 and 20 points, respectively, and made two more All-Star appearances. Jordan is now an owner of the Charlotte Hornets and continues to be an integral part of the NBA landscape.

As you can see, both players had storied NBA careers with some eerie commonalities. Both won all their titles with Phil Jackson as their coach. Kobe was drafted by the Hornets, and Jordan became the franchise’s owner. They both faced early criticisms about their game. Kobe also studied Jordan’s outside game, developing his patented fadeaway in his later years, essentially mimicking MJ. Their connection will always be very prevalent.

Let’s break down some key aspects of each player and compare their stats and overall accomplishments side by side.

Look at their career average side-by-side. Jordan averaged 5 more points than Kobe over their entire careers at 30.1 and 25 PPG, respectively. Let’s dig a little deeper, though:

Jordan was a better scorer in every benchmark we covered—even the final year of his career. MJ was also 39 in his last season, while Kobe was 37 (although he did suffer a torn Achilles the prior year).

Michael Jordan was an elite defender. He averaged almost two and a half career steals and a block over his fifteen-year career and won Defensive Player of the Year in 1988. Kobe was no slouch on the defensive end either, compiling twelve All-Defense honors over his career. He just didn’t have the stats to compete with Jordan on the defensive end.

Jordan leads in these categories as well. Jordan’s peak in assists and rebounds occurred during the 1988-89 season, where he averaged 8 each. Kobe never even sniffed 7 assists or rebounds in a single season, which gives Jordan the edge again. Kobe did enough on the glass and in getting his teammates involved that they weren’t glaring omissions in his game, but he never reached the same peaks that Jordan did.

Both are legendary competitors. It’s been implied that they were difficult teammates on numerous occasions, but that same fire is what made them great, too. Their work ethic was undeniable as well. When it comes to work ethic and the desire to win, Kobe and LeBron are the only two players that get mentioned in the same breath as Jordan. However, I have to lean toward “His Airness” again for this category.

While it is fun to have this argument, the stats and overall career accomplishments lean heavily in favor of Jordan. Jordan is still a household name in the NBA as part-owner of the Hornets. Newer fans can watch his greatness with the advent of YouTube and several highlight accounts on social media. Unfortunately, we will never be able to witness what Kobe’s life after basketball would look like because he was taken from us so prematurely.

If you compared Kobe and MJ based solely on in-game highlights, a better argument for Kobe would arise. His highlights are just as impressive; some of his dunks were very Jordan-esque. But once you lay the statistics out, you will be hard-pressed to say Kobe is better.

Kobe or Jordan? Who ya got? Let us know below in the comments!