How Many MVPs Did Kobe Win? 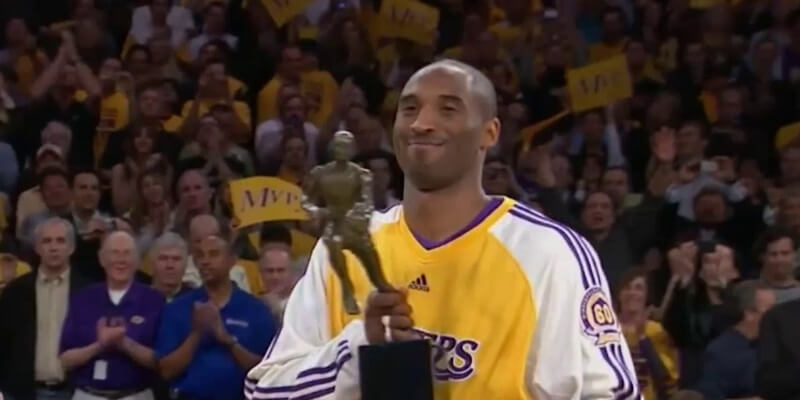 Taking home an MVP trophy after a hard-fought season is one of the most difficult things to do in basketball. Even the greatest players of all time clawed and scratched in order to just get one or a few throughout their career. That includes Kobe Bryant.

I have been watching basketball for the better part of thirty years. My own experience with the game has given me a lot of knowledge about the NBA and its history. Not only that, but I witnessed Kobe and his MVP run firsthand.

In this guide I will look at all the MVP Kobe won, as well as some he got close on. Using that, we can break down what made him so special, why he got the trophy he did, and what it takes to have a truly unique legacy in the NBA.

Check out the following sections to learn more.

Did Kobe Get More Than One MVP?

There is no doubt that Kobe was one of the best players in NBA history. His resume matches up with just about anyone, including Lebron and Jordan. Not only did he win a whopping five Finals, he won Finals MVP twice, made the all-first team 11 times, and was an 18 time all-star.

Despite all of that, and despite the fact that he was the face of the league for so long, he only took home a single MVP trophy during his time in the NBA. That may sound surprising, but it also reinforces why the achievement is such a big deal for so many players.

He won MVP in 2008. During that year, Kobe averaged 28 points a game, 6 rebounds, 5 assists, and almost two steals. He also helped the Lakers take the number one seed in the West and got them to the Finals alongside Pau Gasol.

While the Lakers would fall that year to the Celtics’ Big Three, there’s no doubt that the team would have failed spectacularly without Bryant at the helm. His leadership, scoring ability, and raw stats were all essential and helped him get the only MVP of his long, impressive career.

Why is Getting MVP So Difficult?

Going off the above section, it may be shocking that Kobe only got one MVP. The truth of the matter, being the absolute best player in the league is extremely difficult. While Kobe was great, he also played with many other all-time players, including Shaq, Lebron, and Tim Duncan.

Not only that, but standing out from the pack multiple times has gotten harder and harder as the years have gone on.

Where the 60’s, 70’s, and 80’s all saw players (Moses Malone, Wilt Chamberlain, Larry Bird, Kareem Abdul Jabaar) get multiple MVPs, the ability to string together multiple has gone down over time. In fact, only Jordan and Lebron have been able to get more than two since 1990.

As such, it’s easy to see why someone as skilled and as talented as Kobe Bryant had so much difficulty winning the award.

How Does Kobe Only Have One?

Beyond the difficulty of being MVP, Kobe also had an unfortunately timed career for someone trying to take home multiple awards. That’s not to say he was bad or came up short, he simply played with a lot of good players who had phenomenal years.

During his early time in the league with Shaq, one MVP went to the big man, while Allen Iverson, Tim Duncan, and Kevin Garnett took home the others.

Then, Steve Nash won back-to-back in 05 and 06, while Dirk Nowitzki won MVP with one of the greatest single-season performances ever. All of that, mixed with the Lakers drop off after their three-peat in the early 2000’s, didn’t give Kobe a lot of room to win his own award.

By that time, Kobe’s career was already on the downswing and his legacy was fully cemented. He didn’t necessarily need another MVP at that point, and the championships proved it.

Here are some questions you might want to be curious about, I’ll answer them below.

Who Has the Most MVPs in NBA History?

Kareem Abdul-Jabaar has more MVP trophies than any other player. He won six during his career, barely edging out Michael Jordan’s five.

Has Anyone Ever Won Back-to-Back MVPs?

Does Lebron James Have any MVP Awards?

Who Votes for MVP?

While it was first voted on by the players, the MVP trophy is given out by a specially selected panel of broadcasters and sportswriters scattered throughout both the USA and Canada. They all cast a vote on first to fifth place selections.

There’s no doubt that Kobe Bryant was incredible. The fact that he only won a single MVP isn’t a knock against him, but rather a testament to how difficult the achievement is to get. He was one of the best players ever, and it showed both on and off the court.

Very few players have gotten an MVP, and all of those that have are either in the Hall of Fame or will be one day. As such, don’t hold it against the Mamba that he only got one. Rather, appreciate all he had to do and overcome to get it.