How Many Rings Does Kyrie Irving Have 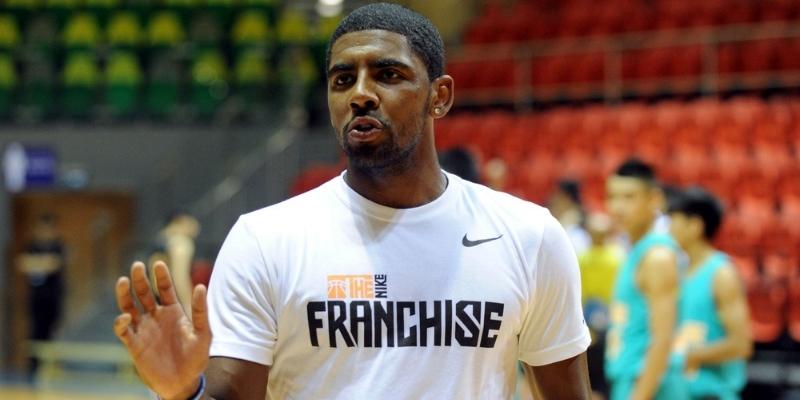 Kyrie Irving is one of the most polarizing NBA superstars in the league today. With the way empowerment and individualism are promoted in today’s game, that is saying something. While Kyrie’s off-the-court persona has come into question, there is no doubt his talents on the court are immense.

Irving is an elite ball-handler, an amazing finisher, and someone who can light up the box score any night. He is also a 1-time NBA Champion.

While we don’t have enough space to discuss Irving’s up and down career, we will take a look at how he got to where he is today. And we will break down his NBA title run, one of the most improbable championships in recent memory.

Hailing from New Jersey, Kyrie Irving joined the top-ranked Duke Blue Devils as a five-star recruit out of high school. Kyrie showed flashes of brilliance as a freshman at Duke, but his freshman season was cut short just 8 games in. Kyrie suffered a toe injury that sidelined him and ultimately ended his college career.

Leaving Duke to join the NBA was a risk, but it paid off on draft night when Kyrie was selected first overall by the Cleveland Cavaliers. The Cavs were bad during Kyrie’s first few years there, finishing with 21, 24, and 33 wins in his first three seasons.

Irving’s first three years, however, weren’t a complete loss. He won Rookie of the Year and made two All-Star teams in three years. He even picked up the 2013-14 All-Star MVP Award in only his third season.

The Cavs’ destiny changed when LeBron James decided his time with the Miami Heat was over. James is Ohio’s native son and changed the landscape of the league when he landed in Cleveland – his second time playing for the franchise – in 2014.

The Cavs would go on to make four straight NBA Finals, all while LeBron was on the team. Kyrie played in three of those seasons, winning an NBA Title in 2016 (more on that later) before being traded to the Boston Celtics in 2017. The move to Boston was a bit puzzling to fans and critics alike.

Most players who just made three straight NBA Finals wouldn’t rock the boat. Many insiders said Irving requested the trade as he wanted to lead his own franchise and break out of the LeBron James shadow. Irving’s time – only two short seasons – in Boston never panned out.

Kyrie’s first season in Boston was rocky. The team actually overachieved that year led by young talent. Jayson Tatum and Jalen Brown led the C’s to the Eastern Conference Finals against, you guessed it, the Cleveland Cavs before losing in seven games.

Kyrie, however, missed the end of the season and all of the playoffs with knee trouble. Many fans wondered how the team made it so far without their star while others wondered if the team was better off without him.

Irving’s second season in Boston was another series of ups and downs. In the first game of the season, newly acquired star Gordon Heyward went down with a horrific ankle injury and missed the entire year.

Kyrie played well all season, averaging 24 points, 5 rebounds, and 7 assists, before flaming out in the playoffs. The Celtics underachieved and the leader of that was Kyrie. At times he looked distant and the writing was on the wall that he was leaving in free agency.

Irving then joined Brookly in 2019, but the season never panned out. Irving started strong, scoring 50 points in his Nets debut. A shoulder injury sidelined him for 26 games in the middle of the season and ultimately cut his year short in February. COVID then brought a halt to the season, but Kyrie never rejoined the team once the year restarted in the Bubble. Irving only played 20 games the entire season.

Irving’s 2020-21 season was an individual success. He was named an All-Star, his seventh selection, and averaged 27 points per game. He also made the highly regarded 50-40-90 club, when a player shoots at least 50% from the field, 40% from three, and 90% from the free-throw line. But even though his season had promise, Kyrie only played 54 games total and missed the last three games of the playoffs while the Nets fell to the eventual NBA Champion Bucks.

As you can see above that there is a negative trend in the way Irving finishes seasons. It usually ends either in injury or flames out while leaving a bad taste in people’s mouths. That wasn’t the case during the early part of his career and the 2015 and 2016 NBA Playoffs are proof that Kyrie can be clutch.

Starting the 2015-16 season, Cleveland was riding high from their Finals appearance the prior year. They had lost, but they were banged up in that series and had high hopes in Year 2. In the West, however, the Golden State Warriors were making history. The Dubs finished the season with an NBA record of 73 wins and only 9 losses. It looked like destiny was on Golden State’s side entering the playoffs.

The Cavs swept the Pistons and Hawks in the first two rounds before facing a tough Toronto Raptors team in the Eastern Conference Finals. They eventually got past Toronto in 6 games. Kyrie had 30 points and 9 assists in the final game of the series to cement the victory.

The Cavs now faced the Warriors in a rematch of the previous year’s Finals. The series started out rough, with Golden State going up 3-1 quickly. The Cavs were all but done as no team had ever come back from being down 3-1 in the Finals. This all changed in 2016, and Kyrie Irving played spectacularly in the final contests.

Kyrie averaged 27 points for the series, scoring 41 in a must-win Game 5 with the Cavs down 3-1. Behind Irving and of course LeBron’s play, the Cavs shocked the world on multiple levels.

First, they came back from a 3-1 deficit to win the title. The team they beat was only the winningest basketball team in NBA history. The Cavs also brought Cleveland their first professional sports title in over 40 years.

All of what I wrote about Cleveland’s improbable victory in 2016 makes it even more confusing that Irving left the team. If you follow him in the news, however, you know that Kyrie has always marched to the beat of his own drum.

From the flat-earth claims that he has made in the past to the sometimes lack of desire to play basketball, Irving has left many asking the question ”why?” over and over. The recent controversy surrounding him not taking the COVID vaccine is just another to add to the long list of incidents involving Irving.

So what is his legacy? Is he a champion? A headcase? A legend? I think you can probably make a case for all three simultaneously. That is why Kyrie Irving is so polarizing both on and off the court. But everything that makes Kyrie a “distraction” is the same qualities that make him the talent that he is with the basketball.

At the end of the day, Kyrie is a one-time NBA Champion. You just wonder if he could have had more titles if he had made a couple of different choices along the way.

Kyrie fans! What is your favorite part of his game? Let us know below in the comments section!