What Shoes Did Larry Bird Wear and The Fall of Converse 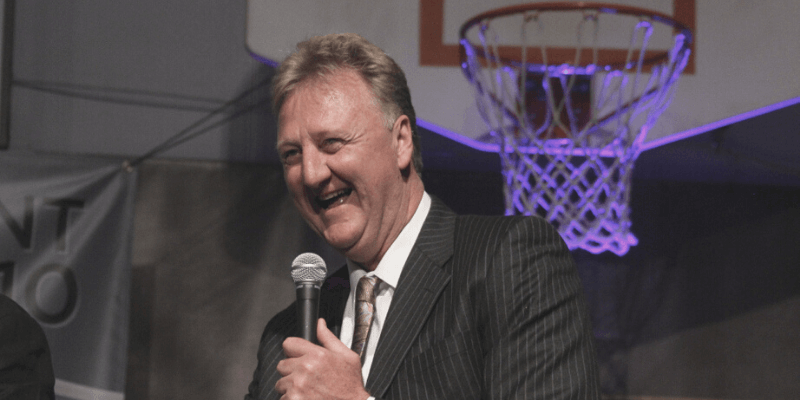 Larry Bird is one of the greats of the game. His highlights have been drooled over and marveled at for over three decades. When people talk about Bird, they discuss his shooting ability, his passing, his tenacity, and his work ethic. But one thing you never hear anyone mention is the sneakers he wore while dazzling fans and frustrating opponents.

For most of his career, Bird wore the Converse Pro and the Converse Weapon shoes. You may not know it, but at one point, Converse had a monopoly on basketball sneakers in the NBA. Now, Nike, UnderArmour, and adidas rule the hardwood.

This article will explain the sneakers Larry Bird wore while playing, then dig into the rise and fall of Converse as a basketball sneaker titan.

The Converse sneaker brand was formed in 1908 when founder Marquis Mills Converse began the company in Malden, MA. Initially, Converse wasn’t in the athletic sneaker game. That changed in 1915. In 1932, Charles “Chuck” Taylor came to the company and complained that his feet were sore. As a result, the concept for Chuck Taylor’s shoes was born. Taylor actually went on to work for Converse as a salesman of the popular sneaker.

After a hiatus during World War II, when the company traded in their rubber-soled shoes for military suits, Converse resumed athletic sneaker production. They really took off in the 1950s and 1960s with the popularization of their Chuck Taylors. Virtually every basketball player at the time wore them.

The Chuck Taylor sneaker became a staple of American youth and adolescence. It was depicted in every television show and movie of its time. While you wouldn’t be caught dead wearing a pair of Chuck Taylors to play basketball today, they’re still rocked as a modern-day fashion statement.

A big step in athletic sneaker dominance for Converse came when they bought out PF Flyer, one of their biggest competitors. The brands were forced to be split up due to anti-trust laws in the mid-70s, but Converse kept the trademark rights for the trendy Jack Purcell line of shoes. They’re still sold today.

In the ‘70s, what brought Converse into “modern times” was the number of stars that wore the brand, namely Julius “Dr. J” Erving. Dr. J wore his famous Convers ProLeather sneakers in some of the most famous plays of his career.

Enter the 1980s, the revitalization of the NBA, and a new crop of stars like Larry Bird and Magic Johnson. The Lakers and Celtics dominated the NBA in the ‘80s. They faced each other in the Finals three times—1984, 1985, and 1987. Every NBA Finals during that decade involved either the Lakers or the Celtics.

Another overlap in the game was the sneakers the Lakers’ and Celtics’ stars chose to endorse. It came to a head when Converse dared ask Magic and Bird to star in a commercial together. Initially, neither player wanted to do it. When they eventually said yes, the commercial that ensued, along with Bird and Magic’s eventual friendship, was memorable.

The Converse Weapon emerged as one of the most popular shoes of the late-80s. It was worn and endorsed by players like Isaiah Thomas, Bernard King, and Kevin McHale to go along with Bird and Magic. The only other rival sneaker at the time was worn by some young kid in Chicago. I think he wore number 23?

With the emergence of other signature shoes around the league from brands like Reebok and Adidas, and with the growing popularity of Michael Jordan’s annual sneaker drop, Converse’s sales dipped in the ‘90s. Other brands made a bigger splash in the 90s. While I was growing up, though, I did, and would still, rock the Sprewells over anything back in the day.

By 2001, Converse had declared bankruptcy. They were never the same. Nike bought the brand in 2003 and tried to keep the sneaker relevant, but by 2012, it was basically extinct from the league. 2019 saw the brand creep back into basketball sneakers with the signing of Kelly Oubre Jr. They kept that momentum in 2020 with the signing of Draymond Green and Shai Gilgious-Alexander.

Their bread and butter continue to be the retro Chuck Taylor’s and their CONS skateboarding branch.

As we mentioned up top, Bird gained a lot of recognition during his famous commercials with Magic and the other cast of characters in the Converse stable. Bird exclusively wore Converse for his entire career, remaining loyal to the brand until his retirement in 1992.

In his rookie season, Bird wore the Converse All-Star. To think that a basketball player could play 82 games wearing this quality of sneakers may be baffling to the modern player, but they were the standard in basketball in the late-70s.

After his rookie year, Bird moved to the Converse Pros and wore them for five years. After the Pros came the Weapons, the sneakers responsible for the famous commercial that he and Magic starred in together. Those sneakers may have actually led to the budding friendship between the two rival players.

In the late stages of Bird’s career, he switched over to the Converse Cons. These sneakers were probably the most “stylish” pair that he ever wore, even though style was never a priority for Larry “Legend.”

In this day and age, with the amount of time and energy spent on a player’s “brand,” it is baffling to think that a Hall of Famer like Larry Bird never once had a signature shoe. Granted, in the era he played, it wasn’t common, but Bird was different. He and Magic Johnson could be credited for saving the league from disaster when they entered it in 1979.

Bird was never the type of player who cared about things like endorsement deals and signature shoes. Still, it’s fascinating to learn about a star of his caliber and wonder why “Converse Birds” were never created.

Did you ever rock a pair of Converse on the court? Let us know about it in the comments section below!