What is Lebron James Height and Weight? 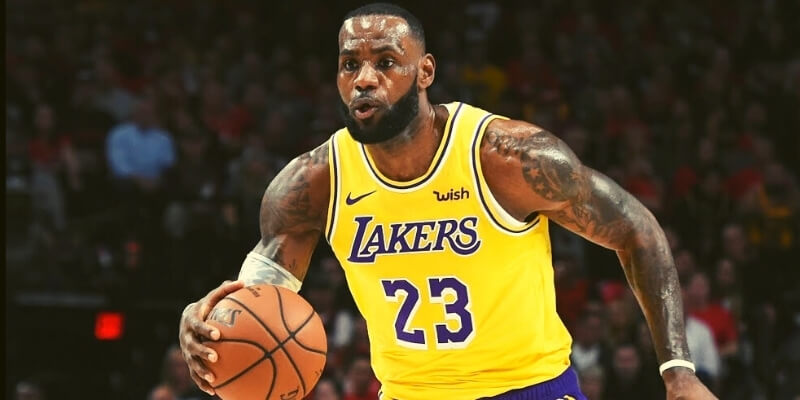 Perhaps no basketball player is, or has ever been, more famous than Lebron James. The King took the NBA by storm when he first entered, and he continues to play at an extreme level. Part of that is his skill, and part of that is his inherent size and strength.

I have been following the NBA religiously for three decades. I also have spent more than twenty years playing the game. That combination of personal and second-hand experience, combined with extra study of the current NBA, is what allowed me to properly create this guide.

Throughout the following sections I will cover, not just Lebron’s height and weight, but the height and weight of many superstars across the NBA. That, matched up against league size averages, will give context on what helps make the King such a special player.

Read on to understand more!

Long May He Reign

Lebron James has had an extremely long and successful career. Though many people attribute that to his skill with the ball (and rightly so) what truly separated him from the pack was how quickly he could move for his size. He was supposed to play like a big man, not a guard.

In terms of dimensions, Lebron weighs 250 pounds and measures 6’9. That’s a large frame for someone who is known for playing the guard and wing position. Especially when you consider how quickly he can get into the lane or throw it down off of a fastbreak.

It is undoubtedly that much speed and quickness, matchup up with his weight and muscular frame, that pushed him above and beyond what most players are able to do. It’s also why he’s still able to dominate the league so late into his basketball career.

Was He Always That Big?

One of the most striking aspects of Lebron is that he came into the NBA directly out of high school. While that’s a widely known fact, what many people overlook is that he was only able to start young and succeed right away because of his impressive height and weight.

Standing at 6’8 and weighing 240 pounds when he was 18, Lebron was able to easily put his mark on basketball as soon as he stepped into a professional arena. Where some players, such as Giannis or Shaq, need to bulk up, he was ready to take the hits right when he got drafted.

That being said, he did continue to grow as he got older. While his height stayed relatively the same, Lebron hit a staggering 275 pounds during his peak years with the Cavaliers and Heat.

That type of strength, backed up by a fast top running speed and 45-inch vertical, made him just about unstoppable when he came barreling down with a head full of steam. That is why he’s one of the greatest to ever play the game.

How Does He Compare to Everyone Else?

Lebron is extremely large, but he’s not particularly big when compared to the big men of the NBA. Most centers are at least 6’11, and the biggest all weigh in at 280 pounds or bigger. In fact, today’s centers have an average weight of 250 pounds and stand nearly seven feet tall.

Not even the King can match up with that.

To see why Lebron’s size is so unique, you have to take a look at both guards and wings because that’s where he really shifted up his style and took over the league.

Even power forwards, one of the largest positions on the court, have an average height and weight of 6’8/230. That’s not terribly big compared to the past, and it’s a nod to today’s smaller, more three-point focused NBA.

Read More: The Average Height of an NBA Player by Position

Looking at all of the above measurements, it’s clear why Lebron is special. He played all four of those positions over the years and easily blows away every average you can find. He doesn’t play like anyone else simply because he’s not built like anyone else.

Here are some related questions about this topic, I’ll briefly answer them below.

Who is the Biggest Player in the NBA?

In today’s basketball, no player is taller than Tacko Fall. The Celtics center stands at a whopping 7’5, and is the tallest draft pick in over a decade. As he’s so large, he also happens to be the heaviest player, weighing in at a staggering 311 pounds.

Who is the Biggest Player in NBA History?

The tallest player to ever make it to the NBA was Gheorghe Muresan, a 7’7 Romanian American drafted by the Washington Bullets in 1993. The heaviest was Oliver Miller, who weighed in at over 380 pounds during his time with the Timberwolves.

How Many Rings Does Lebron Have?

Lebron has been to 10 Finals. In them, he won four rings and lost six times. He got two rings with the Heat, one with the Cavaliers, and one with the Lakers.

How High Can Lebron Jump?

In his prime, Lebron James had a vertical of around 45 inches. While that’s not quite at the top of the league, it’s definitely one of the most impressive jump heights given his size.

Everyone knows that Lebron James is special, but few people realize just how special he is when it comes to raw athletic ability. The King has a swiftness and dexterity to him that players of his height and weight simply cannot match.

Nobody is the history of basketball, even the greatest player of all time, Michael Jordan, has been able to do so much in such a big frame. That is why everyone knows his name, and why he’s one of the most fun players to watch. You never know what he’ll do next.