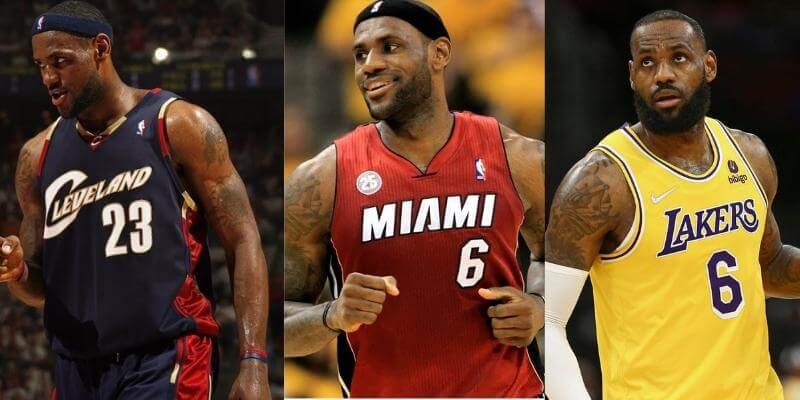 Many casual fans (and even some more serious ones) assume pro athletes are assigned their jersey numbers when they join a team. While that is sometimes true, players often pick theirs out. When they do, it’s typically because it has a personal connection to their life.

One such athlete is Lebron James. The megastar has had two different numbers (23, 6) while playing in the NBA, and each one had personal importance to him.

In this article, we’ll break down what they meant, as well as why he switched from one to the other.

As long as he played serious basketball, Lebron rocked number 23. Those digits mean a lot of things to many people, but anyone who follows the NBA commonly associates it with Michael Jordan. He wore 23 for his entire career with the Bulls, and it became a part of his legacy.

If it seems that Lebron wearing the exact same number as the greatest of all time is a strange coincidence, it’s not. He specifically chose his jersey number as an homage to Jordan, who was always his favorite player and inspiration growing up.

There’s a lot of pressure put on young athletes. That’s especially true of players who come into the league with as much fanfare as Lebron. He took the entire basketball world by storm, and leaped into the public spotlight long before he ever got to the NBA.

Still, he had extremely big shoes to fill. Not only were expectations through the roof, but many people were already comparing him to Michael Jordan before he even stepped onto an NBA court. He could have run from such talk, but instead he moved toward it.

Rather than shying away and trying to change the conversation, Lebron actively entered into it by putting 23 on his jersey. Everyone knew its connection with Jordan, and they also understood exactly where Lebron wanted his career to go.

Even so, the young James didn’t wear that number as a challenge. Rather, it was a tribute. He loved watching the Bulls growing up, and he was always amazed at what Jordan could do. In fact, he’s admitted that he used to hope to be like Mike when he grew up.

There’s a lot of debate between the two players as to who’s the greatest ever. While that’s extremely relevant for fans and analysts, Lebron sees Jordan as one of the primary reasons he managed to succeed and how he became the superstar he is today.

A Switch to Six

Lebron wore 23 for his entire career with the Cavaliers. However, when he went to the Heats and Lakers he decided to make a change. Rather than continuing with the number that started his career, he went with something else to end it.

Lebron decided to pick the number 6 for his time in Miami and Los Angeles. There were several reasons for that change, and they all informed his decision. First, he decided to go with 6 to honor his eldest son, who was born on October 6th. Why he decided to change is a different story.

Though he chose 6 for his son, he moved from 23 due to the fact that he wanted a new identity in a new city. He’s always been compared to Jordan, but he wanted to create some distance during his final stretch.

On top of that, he personally believes that no one should wear the number to give Jordan more respect. Lebron has always had a deep love for the Bulls great, and that’s another way to honor his legacy.

He’s so dedicated to that, in fact, that he has a petition going around to make sure nobody will ever wear 23 again. That would cement him and Jordan as two of the greats, and forever immortalize his own push to be in the same conversation as his idol.

Jerseys Around the League

Both of Lebron’s numbers mean a lot to him, but choosing a specific jersey is not something that’s unique to his play. There are various players who chose their number for a very specific reason.

Damien Lillard wears the number 0 as a tribute to both Oakland and Oregon, Stephen Curry wears 30 to honor his dad, and Wade wore 3 as a tribute to the Holy Trinity. Even Jordan himself chose 23 because it was half of his brother’s number (45) rounded up.

A jersey is more than a number. It’s a brand, a statement, and, for many players in the league, part of their identity. Not every pro athlete needs to have something special on their back each night, but Lebron is certainly no ordinary player.

Both of his numbers have deep meanings within his own life and reflect on the way he views basketball and the world. It’s unlikely he’ll ever change again, and if he doesn’t, it’s clear why.