How Many Times Has Lebron James Been to NBA Finals & Won Rings? 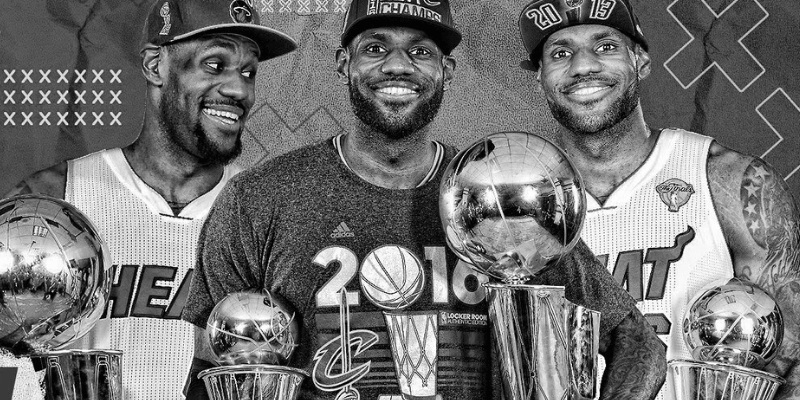 As basketball fans, we are all aware of the resume of Lebron James and the unanswerable argument of whether or not he is the best player to ever play the game.

His statistics speak for themselves, and if all you had to go by was his on-paper performance, there are very few to ever compare:

These stats are very impressive and he doesn’t seem to be slowing down anytime soon, posting one of his best points per game averages last year, his 16th year in the league. But these stats fail to tell the whole story of Lebron’s career.

The biggest thing that separates him from almost everyone to ever play was his desire to win at all costs. He has spoken about how important winning is to him and points to his several NBA Titles. But how many times has Lebron played in the NBA Finals, and how many championships has he won?

Take a look at all of the NBA Finals from 2011-2018 and there is one thing that never changes, and that’s Lebron James’ name in the lineup.

Let’s take a closer look at Lebron’s NBA Finals appearances and championships broken up into distinct eras in Lebron’s career.

Lebron catapulted into the NBA in the 2003 season with the most hype any player has ever seen. Lebron immediately lived up to the hype, winning Rookie of the Year his first year and making the All-Star game in just his second year in the league.

In just 4 short years after his rookie campaign, Lebron carried his underqualified Cavaliers team to a Finals appearance against a Goliath in the San Antonio Spurs led by Tim Duncan, Tony Parker, and Manu Ginobili.

The Spurs handled the Cavs easily, sweeping them in 4 games, but it was a glimpse into the future of the league for the next decade plus as Lebron asserted his dominance on the league throughout the playoffs.

After 7 seasons with the Cavaliers, Lebron became the NBA’s public enemy #1 with “The Decision” to join Dwyane Wade, Chris Bosh, and the Miami Heat. Even though the Heat were seen as the league’s villain, they were a dominant force, making the NBA Finals each year that Lebron was on the team from 2010-2014 and winning 2 titles during that time:

Lebron made a somewhat surprising return back to his home state and the Cleveland Cavaliers where he spent the beginning of his career and didn’t skip a beat when it came to winning and returning to the NBA Finals:

The 2019 season saw Lebron’s star head toward the big lights of Los Angeles and the LA Lakers in free agency. 2019 was a different year for Lebron in a number of different respects. It saw him miss 27 total games while also missing the playoffs altogether, unceremoniously ending his NBA Finals appearance streak at 8 straight years.

So there you have it.

A brief journey through the legacy of one of the NBA’s most consistent winners. And to think he accomplished this during the era of the “Superteam” is astounding. But now the question begs to be asked, even if we can’t answer it yet: Will Lebron James ever make it back to the NBA Finals?

Readers, what do you think? Will Lebron ever be back to the NBA Finals? And will we ever see another player lead their team to 8 straight Finals appearances? Let us know what you think below in the comments!