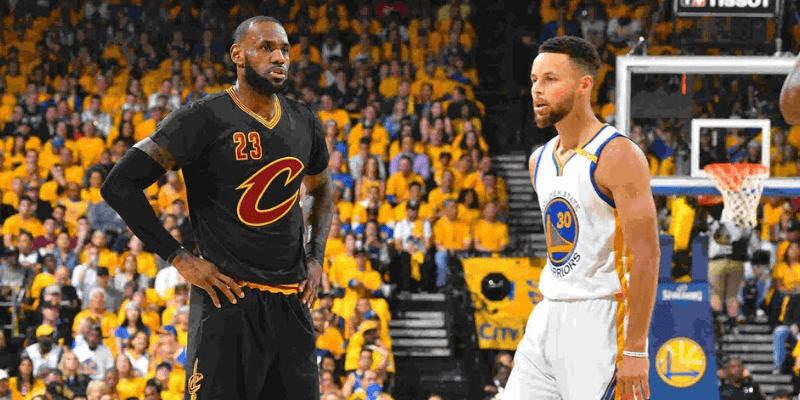 One of the best aspects of being a basketball fan is the arguments you can have with your friends, teammates, co-workers, or that random guy at the end of the bar, about who is better than who.

Some of the more infamous arguments on this topic include a who’s who of the greatest players to ever play the game of basketball: Wilt vs. Russell? Bird vs. Magic? Jordan vs. LeBron?

One argument that has risen to prominence in recent years, due to each players’ continued success, is

LeBron vs. Stephen Curry. Who is better?

Let’s break this argument down in sections in order to paint a clear picture of each player’s greatest attributes. Another great thing about sports is that while statistics are extremely important when measuring a player they aren’t the only measurement to go by, especially in the game of basketball. One thing nobody is going to argue is that both Steph Curry and LeBron James are two of the best players in the NBA currently and among the top 25 to ever play the sport.

After that fact, their lives couldn’t be more different. LeBron and Steph play different positions, they both rose to stardom through totally different paths with LeBron being dubbed the next big thing before graduating high school while Steph barely got recruited out of high school to play big-time college basketball. Not to mention their games, and styles of play, differ in many ways.

LeBron James is a 6’8” 250-pound monster who would rather muscle past you in transition than finesse his way towards getting off a shot. 70% of LeBron’s shots are 2-pointers, and many of them are either strong moves to the basket or post ups against smaller defenders.

Steph Curry is 6’3” and weighs 190 pounds soaking wet. His game is all touch and finesse and he loves pulling up deep from behind the three-point line. More than half of the shots he attempts are 3’s. It doesn’t hurt that he is arguably one of the best shooters in NBA history.

Let’s break down some other factors in this argument, shall we?

Steph and LeBron have experienced both team and individual success in their careers.

Steph Curry has won three NBA titles with the Golden State Warriors and has been named MVP of the league twice. His 2015-16 Warriors team made history when they won 73 regular season games, eclipsing the Jordan led Bulls team that won 72 games in 1996. While that team was expected to handily win it all that year they ran into a Cavaliers team led by, you guessed it, LeBron James. Steph and the Warriors have beaten the Cavaliers for each one of their NBA titles, creating a modern-day rivalry between two highly successful teams.

LeBron James has also won the NBA title three times in his career, twice with the Miami Heat and once with the Cleveland Cavaliers. The most eye-opening stat that I am amazed by every time I hear it is that between 2011and 2018 LeBron played in every NBA Finals. Yes, you read that right. Eight straight years of NBA championships where LeBron James was involved. He is also a four-time league MVP. Out of pure respect, some sportswriters simply vote for him every year as long as he is healthy because he is the “best player in the NBA”.

If you can believe it, Steph Curry came into the league with a lot of question marks about whether or not he would succeed due to his small frame and lack of defensive prowess. He started his career a bit slow averaging around 16 ppg in his first three years in the league. Since the 2015-16 season, he has been on fire, averaging 30.1, 25.3, 26.4, and 27.3 since them.

LeBron James has great court awareness and vision and it shows in his career passing numbers. He has averaged over 7 assists per game over his entire career.

Steph Curry is a bit more of a score-first point guard and it shows in the small dip in his passing numbers overall. He has dished out almost 7 assists per game throughout his entire career but looks to shoot whenever he is open. And as a career 44% three-point shooter, can you blame him?

LeBron James excels in this category also averaging 7.5 rebounds over his career to Steph’s 4.5 rebounds.

When you are James’ size and play with the passion and desire that James plays with, you are going to end up with several rebounds per game. LeBron also ends up under the basket more than Curry due to the position he plays giving him more time under the basket to grab missed shots.

This category is obviously tougher to measure than numbers like scoring, however, it can sway some people’s opinions more than they even know.

I think, based on the four categories we have already discussed before this one, we can decide that LeBron James is better than Stephen Curry. LeBron’s only real competition when it comes to this argument is Michael Jordan. LeBron is either the first or second best player in NBA history in most people’s opinions.

BUT, Steph Curry may be the most unbelievably exciting player ever. From fancy ball-handling, circus shots, and overall flare he shows on the court, you don’t want to blink during a game that Curry is in. Sometimes when you watch LeBron play, you can almost see the pressure of an entire league on his shoulders. Curry plays every game with youthful enthusiasm and it shows in the decisions he makes and his almost always smiling face while on the court.

Arguments like this, while impossible to ever truly win or lose, are so much fun to be a part of. You may not make your case on who is better than who but it shows your overflowing passion about this great game.

What are your thoughts on LeBron vs. Stephen Curry? Who is your pick for a better player? State your case in the comments below!