What is Lebron James’ Wingspan? 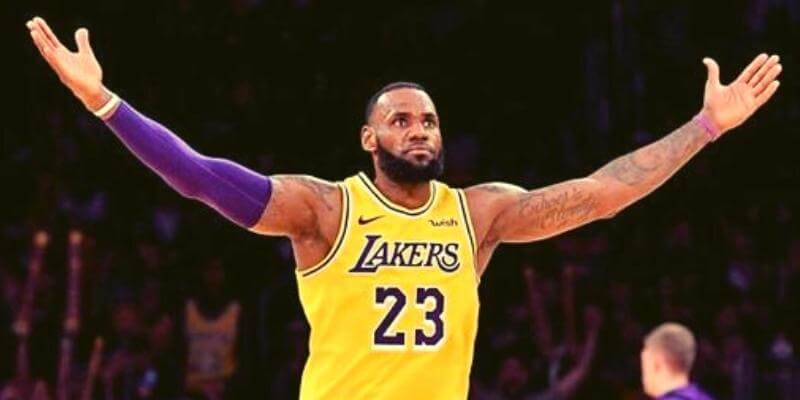 Wingspan is one of the most important aspects in the NBA. While many organizations used to overlook it when evaluating past talent, it’s become more and more popular as a complement to more traditional measurements like height and weight.

Many players benefit greatly from their large wingspan, and that includes Lebron James. The superstar had a ton of skill and unmatched power. However, his long reach helped him become one of the biggest players of all time as well. This guide looks at how below.

As with so many great players, Lebron was much bigger than most of his competition. Though he came into the league a bit lean, he quickly bulked up in a big way. During his prime, the future hall of famer stood 6’9 and weighed a whopping 265 pounds.

That combination turned him into a superstar, but his wingspan helped too. His arms always measured much longer than other guards, wings, and forwards. His reach measures an impressive seven feet across, putting him far above average for nearly every position.

Not only that, but Lebron spent a lot of his time with the Cavaliers playing on the outside of the key. Though he did get a lot of time down low when he went to the Heat and Lakers, the tough forward did a great job of stretching the floor and opening up outside shooting.

Lebron has a ton of power packed into his bulky frame. Even so, he’s fast, quick, and owns one of the best basketball IQ’s of all time. That combination made him one of the greatest players to ever play ball. However, his wingspan did a lot of work too.

When playing in the NBA, every single physical advantage matters. More height, weight, or even a larger hand size can give players an edge over their competition. Wingspan greatly helps with that because a longer reach is great for dunks, layups, shots, rebounds, and blocks.

Lebron’s above average arms go a long way towards how he likes to play. He’s a physical player who uses his size to simply push through or go over defenders. He also uses his large body to stop drives and keep players out of the key, especially in his prime.

If he had shorter arms, he may have not been able to take full advantage of such plays. NBA players are amazing at body control, and they are great at getting ahead or above a defender.

Lebron’s extended reach allowed him to get to shots (or fly in for his patented chase down block) that someone with smaller arms would not have been able to contest. It also enabled him to maneuver in the lane or get up for strong dunks.

Overall, NBA players have arms that are longer than their height. The wider that discrepancy, the better. Lebron stands 6’9, but his reach is 7’0. That gives him three extra inches on his arms. It’s not a huge discrepancy, but it’s more than enough to push him ahead.

Looking at both small forwards and power forwards, the average wingspan across the NBA is 6’10 and 7’0. Those measurements mean Lebron is right in the middle when down on the block, but much further ahead from where he normally played.

When you combine his reach with his power, skill, and quickness, it’s easy to see why he’s largely considered one of the best players to even play the game.

There are many great players in the NBA with long arms, but few were able to make use of their reach like Lebron. He’s always been a highly skilled and hard-working superstar, but his wide wingspan is another physical advantage he leveraged to reach new heights.