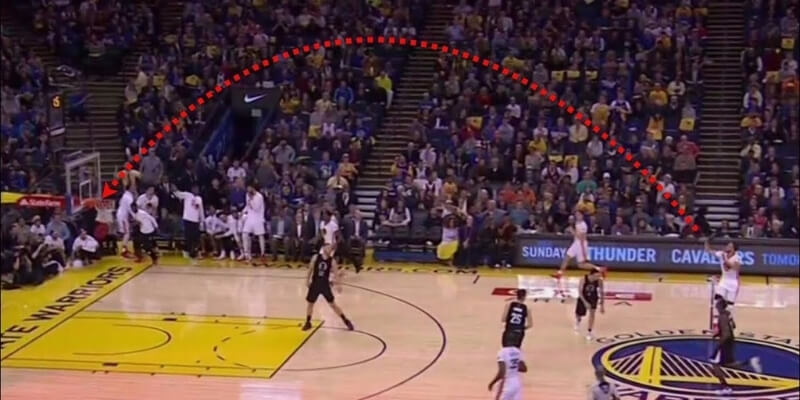 The NBA has become more and more long range focused over the past few seasons, and for good reason. Threes are exciting and bring a whole new dimension to offensive play. That is why extremely long shots, though rare, are so incredibly fun to watch.

As a basketball player/spectator who has spent more than 25 years both in and around the game, I have first-hand knowledge about the sport and the NBA. My own experience, backed up by further study, allowed me to compile the list in this guide.

Throughout the following sections, I will go over the longest shots in basketball history by explaining when they occurred, who shot them, as well as their significance to the sport as a whole.

Keep reading to find out more!

Going Beyond the Line

While the NBA is now undoubtedly a three-point focused league, long shots are much rarer than many may first assume. In fact, the most half-court shots ever made in an NBA season is 13. That’s mainly because there aren’t too many opportunities to heave the ball.

In addition, shooting (and missing) long range shots tends to bring down a player’s 3-point percentage. Many do not want that and actively try to avoid heaving up something that’s unlikely to be made anyway. That being said, plenty of long shots have dropped over the years.

There have been many, many long shots made throughout NBA history, but none of them have been as long as the bomb Baron Davis dropped while playing with the Charlotte Hornets in 2001. At the end of the third quarter, he tossed the ball 89 feet and threw the net.

For reference, a basketball court is 91.86 feet long. That means Davis shot the ball with just 2 extra feet to spare.

Most long shots are shorter than 89 feet because, even with only a few seconds left on the clock, players take a dribble or two up court before shooting the ball. Davis didn’t have that luxury (only 0.7 seconds) which is why he managed to make history on that day in 2001.

To further give reference to just how hard it is to even have an attempt as long as Davis’s, the next longest shot in NBA history occurred twenty-four years earlier when Norm Van Lier made an 84 foot shot for the Bulls while facing off against the Spurs in San Antonio.

The heave falls five feet short of Baron’s, and reinforces the elements that need to come together for an 89 footer. Even so, Lier’s was also extremely surprising (and no doubt lucky).

The heave would hold in the record books for a long time. Though it doesn’t get to sit at number one, even now, so many years after the event, only one player has been able to get three points from so far back on the court.

It wouldn’t be a true NBA list without the King. Lebron has never been known as a three shooter. However, you don’t need to be a sharpshooter to hit extremely long shots. You just need a lot of strength. And there’s no doubt that James has that in spades.

As strong as he is even today, he was a lot more powerful in his younger years. That’s especially true during his impressive Finals run in 2007. It was during that season, when facing off against the Celtics, that he chucked up an 83-foot prayer that was answered with a swish.

Like the other all-time long shots, Lebron’s occurred with almost no time on the clock (1 second) at the end of a quarter (the third). He grabbed it, got to throw it up uncontested, and somehow it made its way home.

Another true anomaly on the longest shot list is Vince Carter’s 82-footer he managed to get home in 2016. Not only is this easily the most recent on the list, but Carter was well past his prime when it occurred.

During a regular season game with the Memphis Grizzlies, he got a rebound at the end of the quarter. After a short hesitation, and realizing how much time was left, he put all of his strength into a heave that went through on the other end.

It takes a lot of strength to be able to do that at any age. Carter doing it at 39 after being in the league so long makes it one of the most impressive long shots ever.

While not an NBA shot, this wouldn’t be a complete list of the longest basketball makes without mentioning Bruce Morris. While playing for Marshall in 1985, the college player set a record (that would be tied by Baron Davis) for the deepest official three pointer on record.

That is still by far the longest make in NCAA history and, as the above list shows, is something only one other person has ever been able to do at any level. Players simply don’t get the chance too often, but Morris sure took advantage of the opportunity when it came.

Long shots are mostly luck, but that doesn’t make them any less exciting or fun. Being able to accurately chuck a ball the length of a basketball court requires a lot of strength, and being able to aim it towards the basket is tricky as well. You need some serious athleticism.

The players on the above list were not necessarily sharp or long range threats, they were simply pure athletes who have the ability to accurately get a ball into a hoop that’s more than 80 feet away. If you ask me, that’s pretty dang impressive.