Is Lonzo Ball A Bust? 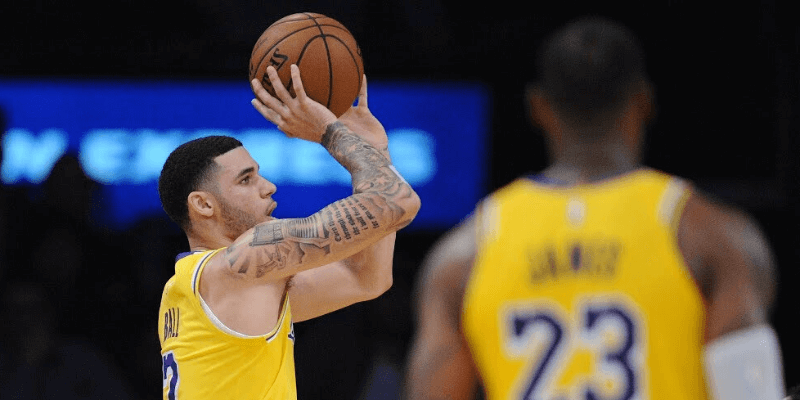 Three years ago, almost nobody outside of the basketball world knew who Lonzo Ball was. Now, thanks to his loud-mouthed father, successful Facebook Live show, and being paired with the LeBron James-led Lakers he is a household name.

Ball has had a meteoric rise in the three short years since he enrolled at UCLA as a freshman. Yeah, he was a highly touted recruit and a huge addition to the Bruins team, and former UCLA Coach Steve Alford’s recruiting resume, but there are a lot of great high school basketball players that don’t make a dent into the pop culture world like Ball has.

While at UCLA, Lonzo Ball’s star rose quickly as he began torching teams and leading the Bruins to the Sweet 16 in the NCAA Tournament. Along the way, he picked up multiple Freshman of the Year awards and earned a spot as a consensus 1st Team All American.

He left UCLA after only one year and was the second pick in the 2017 NBA Draft being selected by the Los Angeles Lakers. He has seen flashes of success in his first 2 years in the league, but has also experienced the lows of the NBA grind. Ball has been dealing with nagging foot and ankle injuries, which has limited his play each of his first two years, and some criticism about his potential to ultimately lead an NBA team.

But, is Lonzo Ball a bust? Those are harsh words for a player only entering his third year in the NBA. Let’s dive into some of the key factors of this debate.

It is a shame that every time Lonzo Ball’s name comes up, the shadow of his father isn’t too far behind. Lavar Ball obviously has nothing to do with Lonzo’s game as a player, but he has played a direct role in the amount of hype that surrounded his son coming out of UCLA.

Lavar said his son was better than LeBron James and would not play for any team but the Los Angeles Lakers prior to the 2017 NBA Draft. If those aren’t two ways to brand your son as “The Chosen One” before even playing a game then I don’t know how else you could do it. While Lonzo has a reputation of always being a mild-mannered, humble player, some of the noise coming from his father has bled into the brains of people which have raised the bar for Lonzo.

Lonzo has been hampered with ankle injuries during the first two years of his career, playing in only 52 games his rookie season and 47 games last year. It is true that young players’ bodies tend to take some time to adjust to the length and relentlessness of the NBA season, but missing 30 or more games in each of his first two seasons raises red flags.

He is still only 21 and has plenty of time to get stronger and prepare for full seasons. Stephen Curry was labeled an injury risk early in his career and is now one of the more durable players in the league, so the jury is still out about this aspect of Ball’s game.

Although Ball missed 30 games his rookie year, he had a fairly promising season. He averaged 10.2 ppg, 7.2 apg, and 6.9 rpg. He also impressed on the defensive end with 1.7 steals and almost 1 block per game. He finished the year ranked 3rd overall among all rookies in overall statistics playing in only 52 total games. He also earned a place on the All-Rookie 2nd Team.

His sophomore NBA season saw a slight dip in some of his numbers but also saw a maturity emerge as he gained comfort on the court. He averaged 9.9 ppg, 5.4 apg, and 5.3 rpg. His steal and block totals dipped too, but he improved from three shooting 33% from behind the arc and improved his overall field goal percentage by 46 percentage points from 36% to 41%. This was all during a very tumultuous Lakers year that saw the arrival of LeBron James and the circus that came with it. By the end of the year, Lonzo was traded to the New Orleans Pelicans and his life as a Laker was a thing of the past, which brings me to another potential improvement to Lonzo’s overall career…

Lonzo’s first year the Lakers only won 35 games and missed the playoffs. His second year they improved by two games going 37-45 and missing the playoffs again. Also in that year LeBron James alienated almost the entire team trying to work a trade for Anthony Davis, Lonzo’s coach Luke Walton was fired, and Magic Johnson blew up the whole Laker front office with rumors of the dysfunction behind the scenes.

Ball’s situation on the Pelicans can’t get much worse than that, even if they do win fewer games. In New Orleans, Ball has the opportunity to start fresh with his own team and he has already expressed how much fun he is having this pre-season. Lonzo’s numbers were decent in two very bad years situationally, and he is looking for his team, where he can improve his numbers even more due to the entire team buy-in. He also has veteran Drue Holliday to learn from, and superstar rookie Zion Williamson who is a points machine, and someone who Lonzo can get the ball to beef up his assist numbers.

We mentioned earlier that Lonzo has improved his shooting numbers since he began in the league. He is now working hard this off-season on improving his entire shooting stroke, which has positioned the ball more in front of him. Lonzo was sort of boomeranging the ball from the other side of his face to shoot in the past and he hopes his new form will not only help improve his shot but get it off quickly as well, making him more efficient from behind the arc.

When Lonzo came into the league the player he was most compared to was Jason Kidd, and that was because of his court vision and passing skills. College basketball coach Mick Cronin called Lonzo “probably the best passer since Jason Kidd and Magic Johnson,” and it shows with his early assist totals. Hopefully, he can form a bond with his new team and stay healthy in order to meet expectations in the passing game.

He has been a good young player in a couple of tough playing situations that has shown improvements in very important areas of his game. The term “bust” should be reserved for players that were highly touted and ended up out of the league, or at least starting rotations, in a matter of years.

I project Lonzo to have a long playing career with the potential to make several all-star teams along the way. Will he be the next Jason Kidd or Magic Johnson? Those are big shoes to fill for anyone.

What are your thoughts on Lonzo Ball? Is he a bust in your eyes? Let’s hear what you have to say in the comments!