How Tall Is Luka Doncic? 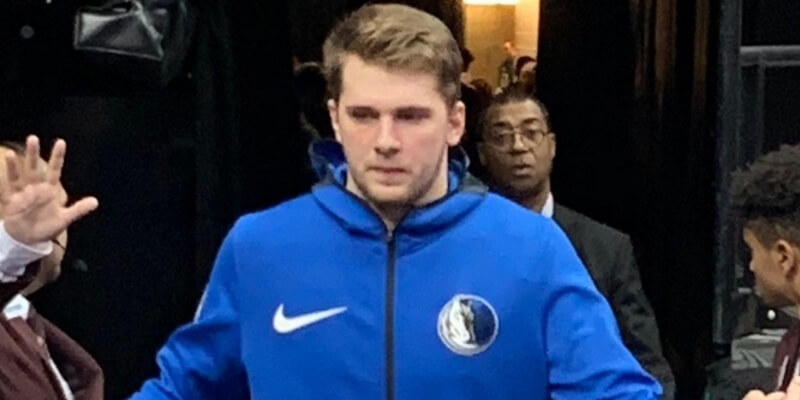 Off the heels of his second consecutive All-NBA nod, everything in Luka Doncic’s career is coming up roses. His 2020-21 season stats were an impressive 27.7 PPG, 8 RPG, and 8.6 APG. And this is just his third year in the league!

Doncic was relatively unknown to basketball fans before coming into the NBA. His dominant performance in a stacked league, though, has turned millions of heads. One mystery that still remains out there is a question about his height. Just how tall is Luka Doncic?

We think the answer is 6’8″, but there has been some uncertainty about this simple measurement. Let’s take a look at this odd story from the beginning.

The average NBA players’ height is 6’7″, making Luka slightly above average in that category. The rest of his game is way above average, though. He’s receiving superstar accolades in only his third year in the league. It must be nice to hear he’s average in at least one category.

Entering Draft night, the Dallas Mavs organization was a bit confused about Luka’s official height. Head coach Rick Carlisle flip-flopped between 6’7″ and 6’8″, while the Mavs’ GM seemed set on 6’7″. However, when Doncic entered Training Camp, his height was listed at 6’7″ . . . even though the Mavs’ official site clocked him at 6’6″.

Some NBA stars that teeter around a particular height benchmark tend to exaggerate their actual size. Conversely, 6’11” cuspers try to avoid the seven-footer stigma. While the days of “big guys” being required to only shoot layups and rebounds are passed, some players still don’t want to be labeled as a seven-footer.

NBA hoopers that are south of 6’0″ like to beef themselves up to that benchmark so they’re scouted differently by opponents (I’m looking at you, Allen Iverson).

The picture below of the Mavs’ starting five from the 2018-19 Mavs media day shows Luka standing next to Harrison Barnes. Barnes is listed at 6’8.” You can tell that Luka is at least the same height as Barnes, if not a smidge taller.

Now, there are a few things we can point out to decide how accurate this photo is. The first is that Luka and Barnes are wearing two different types of sneakers. The other observation is that Barnes is leaning slightly to the left in the picture while Luka seems to be standing completely upright. We are totally splitting hairs here, but these slight differences play a part in their height comparison.

The NBA has abandoned set positions in the past 6-7 years, which has benefited Luka’s on-court dominance. Doncic is listed as a guard/forward on the Mavs’ roster page. If you watch a Mavs game, though, you know he initiates the offense, like a traditional point guard, a lot.

In fact, Luka finished 8th in the league in Player Usage Rating, which measures how much a player has the ball in a given game. Even in the mid-2000s, if you had a player who was 6’8″ handle the ball as much as Luka, you would be calling him the next Magic Johnson. Interestingly enough, Magic’s highest career usage rate is 10 points less than Luka’s from this season.

Now factor in the amount of time Luka spends with the ball and compare it to the average height of an NBA point guard—between 6’2″ and 6’3″. He has a significant height advantage on the court.

Being 6’8″-ish often helps Luka get to the basket and finish drives over smaller defenders. Just watch what Doncic recently did against Patrick Beverly in the 2021 Playoffs. His 6’8″ frame helped him post the smaller defender up; his size then gave him an easy lane to the hoop.

Luka’s size also helps him get shots off without being blocked. One small hole in Doncic’s game is his shooting; he has a very slow release. But when you’re 6’8″ and guarded by defenders a couple inches shorter than you, your shot selection gets better. Ask any player about the confidence boost they get when shooting the ball against a shorter defender. It helps shot-making immensely.

If the numbers and his on-court performance continue to improve, we may eventually be discussing Luka Doncic as one of the greatest players ever to lace up on an NBA court. He is that special—and is only three years into his NBA career.

His game is well known, and his height is a mystery, which adds to his mystique. We’ve seen Luka’s height listed anywhere from 6’6” to 6’9″. Whatever his size, he has reaped the benefits of playing the game as an oversized ball handler. Barring a catastrophic injury, he’ll be a Hall of Famer—no matter how tall he actually is.

What is your favorite Luka Doncic moment thus far in his career? Let us know below in the comments!