What is Luka Doncic’s Wingspan? 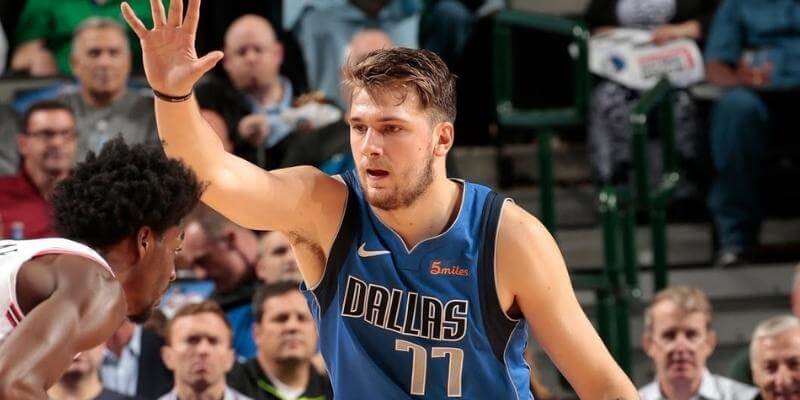 Luka Doncic is one of the most popular players in the NBA, and for good reason. He’s an absolutely electric scorer/playmaker who owes a lot of his power to his natural athletic ability. However, as great as his speed and size are, what matters more is his wingspan.

Throughout the following article, I will cover Doncic’s wingspan in order to analyze how it stacks up to the rest of the league, the way it helps him during a game, and, most importantly, why it matters so much.

Doncic is not a terribly large player, but he’s not small either. He stands a respectable 6’7, which allows him to match up well against a lot of smaller wings or guards. It also enables him to shoot over players or post up when the situation calls for it. That’s furthered by his wingspan.

Looking at Doncic’s height, his reach is slightly above average. It measures an impressive 7’2, which is above all similar players.

The NBA average wingspan for those who stand 6’6 is 6’10. Still impressive, but not as long as Luka.

The extra three inches Doncic gets may not seem like a lot right away, but they’re a big deal when it comes to both scoring and defense.

Just being able to go an inch above someone trying to block or out rebound you can make all the difference in the world.

When evaluating NBA players, most organizations focus on height. While that makes sense from an athletic point of view, wingspan is also incredibly valuable. That’s because a long reach provides players with more options when either getting too or defending the rim.

Another advantage, that both Kawhi Leonard and Allen Iverson put into practice, is being able to steal the ball. The longer a player’s arms are, the easier time they have reaching into passing lanes, disrupting hand offs, or moving around screens.

Something else to consider is that players with long wingspans tend to have bigger hands. That’s another large advantage in a game like basketball where palming is so important. It makes blocking and stealing much, much easier as well.

The Importance of Reach

In the past, teams didn’t put a huge emphasis on wingspan. With new analytics, it’s becoming more and more of a focus in today’s NBA. There are plenty of teams that scout for it, and a range of players who have gotten more attention due to their longer arms.

The advantage of an extended reach is something people have known about for years, but it’s only recently where it’s started to matter in a more concrete way. There have even been several studies that have shown its importance within the game.

For Doncic, his wingspan enables him to play in two distinct ways.

One, it greatly increases his offensive potential. While he’s known for his quick stepback, being able to reach up on a smaller defender and shoot uncontested is a big deal.

The other reason his wingspan matters is his position. Doncic is a guard, but a rather large one. Not only can he leverage his size in such positions, but his extra arm length allows him to go up and over where other players would have to pass.

Luka Doncic is not someone a lot of people think of when someone brings up a large wingspan. However, according to all metrics, his arms have a lot of extra length. That then translates to more baskets, better shots, and generally better defense.

The shifty guard has a lot of aspects that make him better at basketball. His long arms are far from the only reason he’s taking the NBA by storm, but they certainly play a key role.