What Numbers Did Michael Jordan Wear 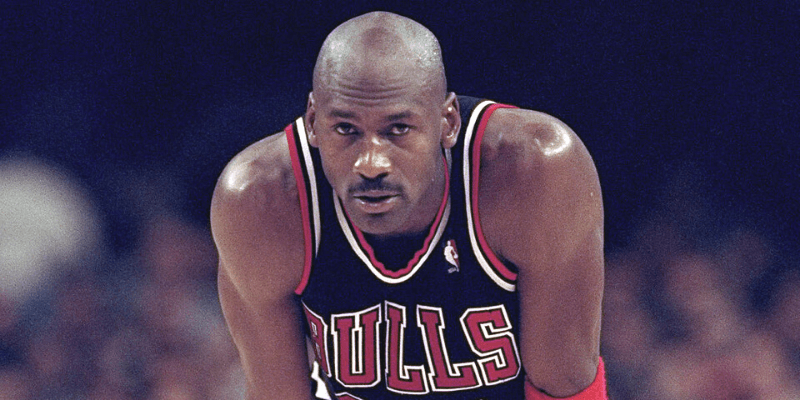 Michael Jordan is one of the most famous professional athletes of all time. When you ask almost anyone which jersey number MJ wore during his storied career, the answer is simple: #23.

Jordan has a long history with the number. 23 was his number at E.A. Laney High School in Wilmington, NC. He also wore it in college as a North Carolina Tarheel under the tutelage of coaching great Dean Smith.

But did Jordan ever wear another number? You may be surprised to know that the answer is yes—multiple numbers, actually.

The Origins of #23: Laney High

Most NBA fans know the slightly skewed story of Jordan being “cut” from his high school team. In actuality, Jordan made the Junior Varsity team after trying out for the varsity and not making the cut. He went on to dominate the JV squad and got called up to varsity by the end of the year.

The following year, his junior season, Jordan made the team with ease and selected number 23. His older brother, Larry wore 45 on the team; it is speculated that Michael picked 23 to split his big brother’s number.

Jordan excelled in high school. In his senior season, Jordan averaged a triple-double—29 PPG, 11 RPG, 10 APG—on his way to a McDonald’s All-American selection.

Jordan would carry those digits to college at the University of North Carolina. His freshman year was out of a storybook: he averaged 13 points on his way to ACC Rookie of the Year honors. The Tarheels finished the regular season with a 24-2 record. They were ranked either 1 or 2 in the nation the entire season and won the ACC Tournament with relative ease.

Jordan’s most famous play in his UNC #23 jersey came during the NCAA Finals against Georgetown. UNC was down one point with 20 seconds left. Jordan, showing early signs of his clutch abilities, hit a 15-footer to win the NCAA title for his UNC squad. The image is burned into the memories of all that love March Madness.

The rest of Jordan’s college career was promising. Although his Tarheel team never won the title with Jordan, it wasn’t unusual to see them ranked number 1. Jordan essentially averaged 20 points and 5 rebounds for his sophomore and junior seasons taking home All-ACC honors, two All-American nods, and was named AP Player of the Year his junior year. After all this success, he skipped his senior campaign to enter the NBA Draft.

Number 23 in the Pros

Jordan chose 23 again when he arrived in the NBA. Selecting the number wasn’t an issue as none of his Bulls’ teammates wore it before he arrived. However, if the hot rookie wanted the number, I wouldn’t have been surprised if the organization had made it happen for MJ.

Jordan wore it from 1984-1993 until his first retirement to play baseball, except for one game.

On Valentine’s Day in 1990, the Bulls faced the Orlando Magic—and Jordan’s jersey came up missing. They searched everywhere for it, even journeying out into the stands to see if a fan’s jersey would fit. Imagine the story you could tell your friends if Michael Jordan needed to wear your Bulls jersey for one night!

They were unsuccessful in finding a jersey in the stands, so Jordan had to wear the number 12 with a nameless back. While it was weird to see on the court, the jersey change didn’t affect Jordan’s game. Although the Bulls lost, MJ scored 49 points and hauled down 7 rebounds.

It may seem like a charming blip in Jordan’s career. The night it happened, though, “Jersey-Gate” was a big deal to the superstitious Jordan. Many in the Bulls camp actually believe it was stolen by someone who worked in the Magic’s arena as a way to throw the Bulls’ star off before the game.

“That has never happened to me before,” said Jordan after the game. “It’s pretty irritating because you are accustomed to certain things, and you don’t like having things misplaced.”

Minor League Baseball, The Comeback, and #45

After the Bulls three-peated as NBA champs from ‘91-’93, Jordan decided to walk away from the sport of basketball and into the unknown. Not only had Jordan felt like he had accomplished everything in the sport, but the tragic murder of his father also had him re-evaluating life.

Jordan and his father had always discussed playing baseball; he decided to follow his father’s inspiration and see if he had the goods. Jordan played for the Birmingham Barons in the Chicago White Sox farm system.

Of course, he needed a number. The simple move would have been to grab #23 and not think twice. But Jordan wanted a new beginning, and his older brother Larry had worn the number in high school, so Jordan chose #45.

“I’m Back”: Jordan Returns to Basketball

In 1995, MJ got the itch to return to the NBA. He feared he may become an MLB replacement player after the 1995 strike, and he still loved the game of basketball. But he would change things up and stick with #45 when he returned to the Bulls. He wore the number 45 for a total of 22 games before returning to 23 in the 1995 NBA Playoffs against the Orlando Magic.

It wasn’t that he played poorly with the new number. In fact, his stat line of 26.9 PPG on 41% shooting was impressive after the long layoff. But he just wasn’t the same explosive MJ.

During Game 1 of the playoffs versus Orlando, he got the ball stolen from him in the closing seconds, which led to a Magic victory. Nick Anderson, the Magic player who stripped Jordan, said, “Number 45 is not number 23. I couldn’t have done that to number 23.”

The number 45 was never seen again. Even though the Magic defeated the Bulls, Jordan averaged over 33 points for the rest of the series. After the series loss to the Magic, the Bulls would never lose another series and ended up three-peating for the second time from ‘96-’98.

Jordan And The Olympics

Jordan played on two Olympic Basketball teams in his career. The first was in 1984 when amateurs, mainly elite college players, made up the roster. Because Olympic jersey numbers only went from 4-15, Jordan got the number 9 jersey.

The next time MJ was in the Olympics was during the infamous Barcelona Olympics in 1992 with the Dream Team. Jordan again wore jersey number 9. With the likes of Charles Barkley, Magic Johnson, and Larry Bird, Jordan and the Dream Team became the biggest ticket in all of the Olympic Games and routed every team they faced.

In a surreal image, the end of each game usually consisted of the team who just lost by forty getting pictures and autographs with the USA team.

Michael Jordan’s number 23 will be burned into the memory of every casual and die-hard fan as his. LeBron James, arguably the next greatest player ever, chose the number because of Jordan and his legacy.

While the stories of his other jersey numbers are a nice wrinkle in his storied career, number 23 is, and always will be, the number MJ wore.

What is your favorite MJ game ever? Let us know in the comments section below!