How Many Triple Doubles Did Michael Jordan Have? 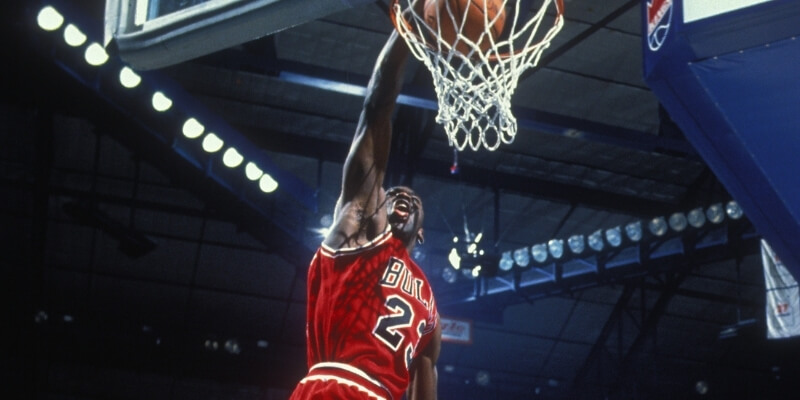 For many, Michael Jordan is the best basketball player of all time. He was a scoring machine, won six titles, as well as countless MVP awards. He was also a stat machine, and had one of the most dominant runs in history. Despite that, not every category he had was impressive.

I am a long-time basketball player who watched the league throughout the 90’s, 2000’s, and 2010’s. My own experience watching Jordan, alongside additional fact checking, is what helped me discuss the topics outlined below.

In this guide, I will look at Jordan’s triple doubles count throughout his career, as well as where he stacks up compared to other greats. That context will help show where Jordan sits all time, and explain why the G.O.A.T may not have as many as people may first believe.

Read below to find out more!

What is Jordan’s Triple Double Number?

When you think of Jordan, you think of success. So few players were able to take over the league like he did, and everyone knows he was about as unstoppable as anyone who has ever stepped onto a court. Even so, he didn’t quite match up when it came to triple doubles.

Of course, Jordan was no slouch. However, where he ranks near the top in just about every relevant category, he’s only 18th all time with 28. That’s still an impressive number of triple doubles, but it’s much further down the list than a lot of other players who don’t have his legacy.

In fact, Jordan is 15 out of the top ten and a staggering 160 behind first place. That’s not necessarily his fault, but it reflects a pretty large gap.

Jordan’s triple double number is not a reflection of him. Rather, it’s a testament of just how hard it is to achieve the feat. Very few players have been able to consistently get that many stats throughout a career, let alone a single season.

The only two exceptions to the above rule are Russell Westbrook and Oscar Robertson. The only players in NBA history to average a triple double for a whole year, the pair sit at one and two on the all time list with 184 and 181.

After that, you have Magic Johnson with 138, Jason Kidd with 107, and Lebron with 99. Then there’s a large drop off down to 78 (Wilt Chamberlain) and then to 59 (Larry Bird). A few more hall of famers (and current all-stars), and then you get to Jordan.

The reality is, due to the few players at the top of the list, triple doubles seem quite skewed. Jordan’s run was incredibly impressive, and he matches up around many other all-time greats like Clyde Drexler, Grant Hill, and Elgin Baylor.

Why Didn’t Jordan Get More?

Jordan’s triple double number is also indicative of how the NBA has shifted over time. Simply put, the league has become much more stat oriented as of late. The shift started in the mid 2000’s, a few years after he retired, and only ramped up in the shoot-first era.

When looking at the all-time triple double list, there are quite a few modern players above him. That includes those like Luka Doncic who have only been around for a few seasons. It’s not that Jordan didn’t get a lot. Rather, it’s a sign of the times.

During the 80’s and 90’s, players weren’t asked to do as much as they are today. Defense has a bigger presence in the league, scoring was more limited, and everyone had a role. There were a few outliers, but for the most part, people stayed in their lane.

Jordan did a lot for the Bulls, but he also had help. He was a defensive monster, a rebounder, shooter, and general playmaker. He also knew when to let Kerr shoot, Pippin score, or Rodman rebound. That gave away his stats, but it also helped create a more complete team.

The combination of a slower game and a lower emphasis on hero ball is why he didn’t quite get three 10’s as much as those who came later. It’s also the reason he won so much.

Here are some other questions you might have, I’ll answer them very quickly below.

Who Has the Most Triple Doubles in History?

Nobody has more triple doubles than Russell Westbrook. With 184, he’s the all-time leader in the stat. That probably won’t get broken for a long, long time.

Is It Possible to Average a Triple Double for a Season?

Yes. Though it’s incredibly rare it has happened three different times. Oscar Roberston did it in the 60’s, while Russel Westbrook did it twice in the last five seasons.

What is a Triple Double?

A triple double is when a basketball player reaches double digits (ten or more) in three of the five main statistical categories (points, assists, rebounds, blocks, or steals).

Who Has the Most Triple Doubles in a Season?

This is another category Westbrook leads in. During the 2016/2017 season, he recorded 42 triple doubles to set the NBA record.

How Many Triple Doubles Does Lebron Have?

Lebron has 99 career triple doubles. That’s good enough to put him fifth on the all time list.

Ultimately, Jordan’s triple double count is irrelevant. Though it’s interesting to look at the number and compare him to players like Harden and Westbrook, he was a different player from a different time. His focus was on getting rings rather than stats.

That’s not to say the statistic isn’t important or impressive. It simply shows that you can’t judge a player based on one stat or category. As always, and as Jordan’s six rings show, there’s more to the story.