What is Michael Jordan’s Vertical Leap? 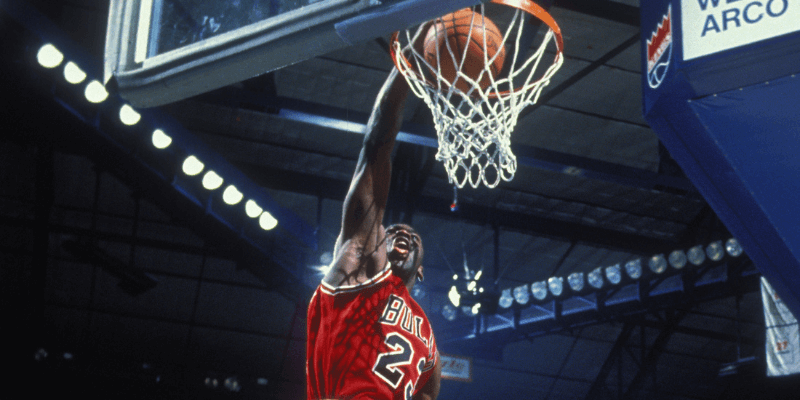 Michael Jordan is known around the world as the greatest basketball player that ever played the game, and deservedly so. He was an amazing scorer, very smart on the court, a great defender, and had the most competitive spirit the NBA has ever seen. But the one thing that probably stood out the most was his athletic ability. They didn’t nickname him “Air” Jordan for nothing.

Videos of his dunks have been shared across YouTube between fans both old and new. The Vertical Leap gods treated Jordan well and it shows in his almost superhero-esque highlights. But what exactly was Jordan’s vertical leap measured at? We’ve got you covered on that, so sit back and relax, or, feel free to leap out of your chair when you see some of Jordan’s best highlights featured below.

What is Vertical Leap?

If vertical leap is new to you, let’s take a look at what the term means and how to measure it. Vertical leap means the act of jumping up in the air and measuring someone’s vertical means to record how high one would jump in the air. It is an effective method of determining a player’s explosiveness and athleticism in an objective manner. While athleticism is more than just how you leap, this is a great number to point to for scouts and coaches who haven’t seen them play.

Measuring either vertical is simple enough. Have the person stand against a wall on a flat surface and have them reach as high as they can drawing a chalk line at their highest reach. Then have them jump as high as possible and add another chalk marking the peak height they jumped. The difference between both chalk marks is the person’s vertical leap measurement.

How High Can “Air” Jordan Fly?

Interestingly enough, this number is contested in basketball circles. Many reports, however, state that Jordan showcased a 46 inch vertical at the University of North Carolina, where he starred for three years. During his time at UNC, the Tarheels dominated the ACC and won the National Title in 1982, thanks to the young freshman’s courageous game-winner.

It wasn’t just the fact that Jordan could jump so high that made him special, however. It was what he did with those athletic abilities – the innovative dunking and the power with which he would dunk, either on a fast break or on someone’s head in traffic – that made him different than the rest of the high flyers of his time. Every dunk he had, especially early in his career, was a highlight and he made the most out of every effort.


Where Does Jordan’s Vertical Rank?

There are only a few other players that have a vertical leap higher than Jordan’s making the group a special one to remember, especially since all of them played before Jordan’s time. Overall, the league is much more athletic than it was in the past but these two players show us that there were athletes of a high caliber in every era of the NBA. Here is a list of the other high-flyers that surprisingly exceeded Jordan’s 46-inch leaping ability.

The only current player to hold a candle to Jordan’s vertical leap is Dennis Smith Jr.. Smith Jr., like Jordan, was also a standout in the ACC where he took the conference by storm for one year en route to becoming the 9th overall pick in the 2017 NBA Draft. Also like Jordan, Smith was a North Carolina kid from Fayetteville, who measured a vertical leap of 48 inches at a pre-draft workout with the Los Angeles Lakers.

Smith Jr. attacks the basket with a ferocity unlike many and while his career hasn’t quite panned out like his fans had hoped, Smith Jr. is always good for a solid performance off the bench and a couple of highlights each night. Smith Jr. is still young enough to turn his career around and has the tools, and the leaping ability, to make a difference in any game he plays.

Sadly, David Thompson’s career ended the year before Jordan entered the league, because that would have been a fun duel. Thompson and Jordan both played high school and college basketball in North Carolina, Thompson just down the road from UNC at NC State, and they could both fly. Thompson was alo two full inches shorter than Jordan making the vertical of 48 inches even more impressive.

Unfortunately, Thompson’s career was marred with injury and drug and alcohol issues. When he was on though, he was not only a high flyer but one of the league’s best players and dangerous scorers. He played nine seasons split between the NBA and ABA, averaged 22.7 PPG over his career, and was named to the Basketball Hall of Fame. While he never quite reached his heights as an overall player, the height at which he could jump will never be forgotten.

The “Big Dipper” was literally gifted the perfect body and athletic gifts to play the game of basketball, which included his NBA history leading 48 inch vertical. So, not only was Wilt the Stilt 7’1” tall and weighing 275 lbs but he also had the best leaping ability in the league. Unfair odds if you were his opponent indeed.

Chamberlain’s dunks were never too flashy. At seven plus feet tall, he didn’t need much other than to get the ball in the rim. Where the Stilt utilized his vertical to his advantage was on the defensive end of the floor and hauling down rebounds. His mind-blowing career statline of 30 PPG and 22 RPG(!) will probably never be touched (they didn’t record blocks during his time in the league, but one can only imagine the statline he accumulated swatting players shots left and right.

While it is fun to check out the highlights of the best leapers in NBA history, it can’t be understated that Jordan’s highlights and the way he seemed to float in the air was unmatched by any of his rivals. There were several who tried to match him during his playing days. Domonique Wilkins and Clyde Drexler were two guys that always went toe-to-toe with MJ both in scoring and in high flying dunks, but neither touched his prowess above the rim.

It seems like no matter how big of a fan you are of Michael Jordan, there are always new highlights that people dig up and throw on YouTube that many have never seen. This just shows how special his legacy was. I have the utmost respect for all of the great dunkers in the league with the same, or higher verticals than Jordan but there is only one “Air” Jordan.

Who is your favorite dunker of all time and what was their vertical leap? Let us know below in the comments!