Michigan Players in the NBA 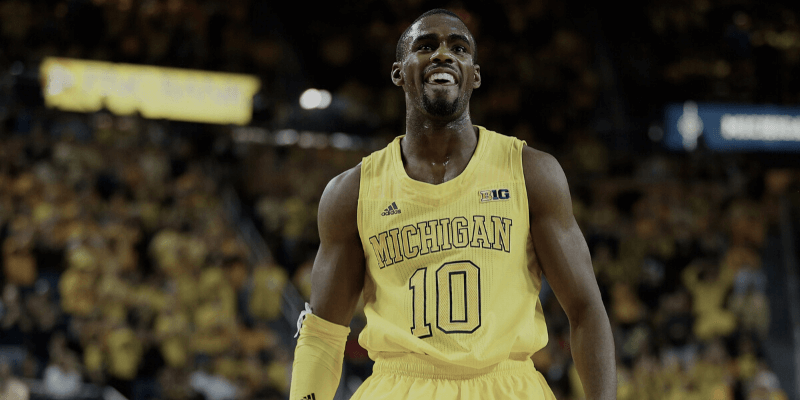 When fans hear about the Michigan Wolverines, they probably think about the history and dominance of their legendary football program first. After all, they rank number one in total wins in college football history by a pretty wide margin.

But Michigan’s basketball team has had some unforgettable teams and their success is nothing to sneeze at. Since 1989, Michigan has qualified for the NCAA Tournament 16 times and reached the Final Four 4 times, and won the national title.

A big reason for all of Michigan’s success is the players they recruited and their quality play once they began to wear the maize and blue. Let’s take a trip down memory lane and cover some of Michigan’s greats and take a look at how they fared after college in the NBA. Here is a full list of current Michigan players in the NBA as of the start of the 2019-20 season.

As the most notorious recruiting class in college basketball history to this day, Michigan’s Fab 5 – Jalen Rose, Juwan Howard, Jimmy King, Ray Jackson, and Chris Webber – burst on the scene in 1991. It consisted of 4 McDonald’s All-Americans and five players ranked in the top 100 recruits of the class. Michigan would start all 5 freshmen during their first year and they lived up to expectations, reaching two consecutive NCAA Finals in 1992 and 1993.

So much has been written about the Fab 5 including the amazing documentary that ESPN did about them, but needless to say that it was one of the most popular college basketball teams ever, and produced some great NBA talent too.

Probably the most talented player of the Fab 5, Chris Webber burst onto the college basketball landscape with a vengeance. Webber dominated college basketball for the two years he played at Michigan, earning All-American honors both years. He led Michigan to the NCAA title game in consecutive years and averaged 18.5 points in those games.

Unfortunately, his most well-known moment came when he called a timeout at the end of the 1993 NCAA title game when they had none left resulting in a technical foul and the end of Michigan’s chance of winning the title.

That didn’t stop his momentum into the NBA where he was the number one pick by the Orlando Magic and was then quickly traded to the Golden State Warriors, and winning Rookie of the Year. Webber’s pro career saw stops in Golden State, Washington, Sacramento, Philadelphia, and Detroit. While he had an amazing pro career, he is still thought of as somewhat of a disappointment as he had so much skill and potential.

Webber is still heavily involved in the NBA as he calls games for TNT with legendary announcer Marv Albert.

Jalen Rose was the point guard on the Fab 5 and set the tone for the team in his three years at Michigan. Rose was the glue guy on the team, often getting everyone together outside of basketball to hang out and build team chemistry and always huddling the team up during tough stretches of games to regain composure. Rose’s best season was his junior year, after Webber left for the NBA when he averaged 20 points and almost 6 rebounds per game.

While Rose wasn’t as highly touted as Webber or Juwan Howard, he was still a lottery pick in the 1994 NBA Draft, getting selected by the Denver Nuggets. Rose spent two years in Denver before getting traded to the Pacers, where his career really began blossoming under head coach Larry Bird. Rose, along with Reggie Miller, led the Pacers to three consecutive Eastern Conference Finals and an NBA Finals appearance in 2000, averaging 25 points in the Finals.

Rose used his notoriety to land a job at ESPN where he works tirelessly on multiple shows. He also opened a charter school in his hometown of Detroit called the Jalen Rose Leadership Academy.

Glen Rice is still known as one of the best sharpshooters in the history of basketball. That reputation began in college as Michigan’s star player and leader during their run to the 1989 NCAA title where he averaged 31 points for the whole tournament. Rice started his career at Michigan slow but burst on the scene his sophomore, junior, and senior years averaging 21.5 PPG his last three years of college.

Rice’s NBA career was just as productive as his time at Michigan. He spent most of his time with the Miami Heat and Charlotte Hornets in the league and played for 15 years. He was a 3-time All-Star, 2-time All-NBA selection, an NBA Champion – winning the title with the Lakers in 2000 – and currently sits 30th all-time in threes made in NBA history.

Tim Hardaway Jr. entered college with high expectations. The son of former NBA great Tim Hardaway, he came to Michigan as an ESPN Top 100 recruit. He had three very solid years at Michigan, averaging 14 points and leading the Wolverines to the NCAA Tournament in all three years there and a Final Four appearance in his junior year. He entered the NBA Draft after his third year there and still ranks 9th all-time in threes made only playing in three seasons.

Hardaway Jr. decided to enter the NBA Draft after his junior year and was selected 24th overall by the New York Knicks, where he averaged 10 points his rookie year, securing an All-Rookie Team selection. He is a score-first guard with a good outside shot so far during his first seven years in the league. His career averages are 13 points on almost 36% shooting from three-point range and is playing a starting role currently for the Dallas Mavericks.

Caris LeVert experienced his fair share of ups and downs at Michigan and his career is seen as a bit of an underdog story. He was a fairly highly rated recruit when he got to Michigan but was low on the depth chart his freshman year, playing about 10 minutes a game and averaging 2 points. His sophomore year was the most complete year at Michigan. He started all of Michigan’s 37 games and averaged 13 points.

LeVert’s final two years at Michigan were plagued with injuries and he ended up writing a letter to all NBA GM’s assuring them he would bounce back. Indiana took a chance and drafted him 20th in the 2016 Draft and he was later traded to Brooklyn before the season started. He has shown flashes of brilliance in four years in the league and is having a breakout 2019-20 season averaging almost 18 points and 4 assists and rebounds each.

Robinson’s path to the NBA was an unorthodox one. He was not heavily recruited and actually started his college career at Division III powerhouse Williams College. After his record-breaking freshman season at Williams, his coach left and Robinson began getting offers from Division I schools and ultimately landed in Ann Arbor. His time at Michigan was productive but not necessarily memorable as he averaged 9 points but shot the three ball very efficiently.

Robinson went undrafted in 2018 but earned a spot on the Heat’s summer league team and made enough of an impact to find a spot on their roster. His rookie year, Robinson only played in 15 games and averaged 3 points. His second season was his breakout. He started the season on record-breaking three-point shooting pace and he broke the record for most threes in NBA history for both an undrafted player and for a player in either their first or second year.

Michigan is a football school and probably always will be. But they have also produced impressive results on the hardwood too. They have been extremely successful in basketball as of late and their footprint in the NBA is increasingly large as each successful Michigan team brings with it more NBA-level talent.