Most Triple Doubles in an NBA Season 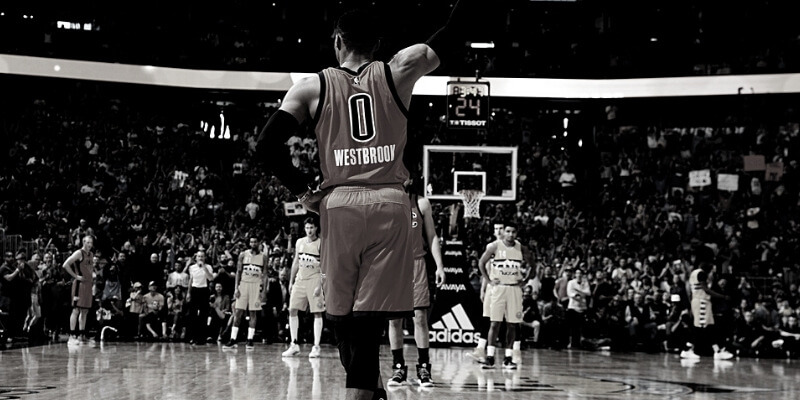 A triple double is one of the best marks of a good NBA player. Being able to get 10 or more stats in any one category is extremely impressive. Getting them in three categories is on another level. That is why having a lot in one season is so hard to do.

In my twenty five plus years of playing and watching basketball, I’ve learned a lot about the game and its long history. My own experience, mixed with some extra research, gave me the ability to cover the best triple double seasons ever and explain how they came to be.

Throughout the following sections not only will I cover the players who were able to amass more triple doubles than anyone else, I will also break down their individual stats in those seasons, as well as provide context for the impressive runs.

Triple doubles, which refer to players who reach double figures in three of the main basketball statistics (rebounds, points, assists, steals, or blocks), first started being recorded in 1979.

Since then, they have been an impressive achievement that helps separate players from the pack. That is why the players on the following list are so impressive and why their seasons stand out among so many other incredible NBA performances.

When it comes to triple doubles, nobody can touch Russel Westbrook. Though he was not the original king of the statistic, as you’ll see below, he did bring it back to the forefront of the NBA due to his strong hustle play and versatility out on the court.

There were many seasons where he recorded a high number of triple doubles, but nothing compared to his campaign in 2016. Netting a total of 42, which is the most ever, he shattered a nearly sixty year long record of averaging a triple double for the entire season.

However, that wasn’t enough. During his extremely impressive campaign, Westbrook also went on to get three different 50 point triple doubles that year, marking him as the first to do it since Kareem Abdul-Jabaar in 1975. He also had the longest triple double streak since Jordan in 89.

There is no doubt that Westbook’s 42 triple double season was amazingly impressive. However, before him the great Oscar Robertson set the standard by getting 41 all the way back in 1961. That record would stand for a staggering 65 years.

Roberston was the original versatile superstar, and he could do just about everything out on the court. A high basketball IQ, mixed superior scoring ability, and raw athletic ability, allowed him to rebound, pass, and get baskets at an almost unmatched rate.

What makes his 61 season, where he averaged a triple double for the entire year, even more impressive is that there was no three point line. That made scoring much harder than it is today.

Though Oscar Roberston’s incredible 61 season broke them up, Westbrook has two amazing triple double years under his belt. After getting 42 in 2016, he came back to get the third most all time in a single season with 34 in 2018.

While that’s quite a bit lower than his record setting mark, he is still one of four players to ever have thirty or more in a single year. And he managed to do it twice. That alone makes him the best triple double player of all time, and he didn’t stop there.

During 2018, with a strong performance against the Bulls, he became the first player to record a triple double against every single team in the NBA. That year he also became just the fourth person in NBA history to reach the 100 triple double mark, and he was the third fastest to do it.

It seems anytime you have an all-time list, you need to include Wilt Chamberlain. The man was a statistics machine, putting up unmatched numbers in a wide range of different categories, including triple doubles.

While he had many years where he put a lot, nothing compared to his run in 1967, where he ended the year with 31. Though that’s less than both Westbrook and Robertson’s best years, it’s almost more impressive because big men don’t have the assist ability as guards.

Points and rebounds came easy for Wilt, but getting 10 in that third category (blocks, steals, or assists) was much more difficult. Even so, he managed to power through in ‘67, bringing home a then-second best all time and being one of the few to ever get more than 30 in one year.

While the above season is undoubtedly amazing, it would not be a complete triple double list without mentioning Wilt’s 1966 playoff campaign where he recorded 7 triple doubles on his way through the postseason.

Looking at the other numbers on this list, seven may not sound like a lot. However, to this day it is still the most postseason triple doubles in NBA history. That alone makes it worth mentioning. The fact that it’s held up for 55 years is even more impressive.

No matter how you slice it, a triple double is hard to achieve. That is why the above players are so special. It takes a lot of talent to be able to get ten in three different categories, and to do it more than thirty times in one year is absolutely incredible.

If you’re someone who enjoys great talent playing at the best level, you won’t get anything better than a triple double. They are fun to watch, and will continue to be the benchmark by which so many superstars are judged for years to come.