How Many Players Are on an NBA Basketball Team? 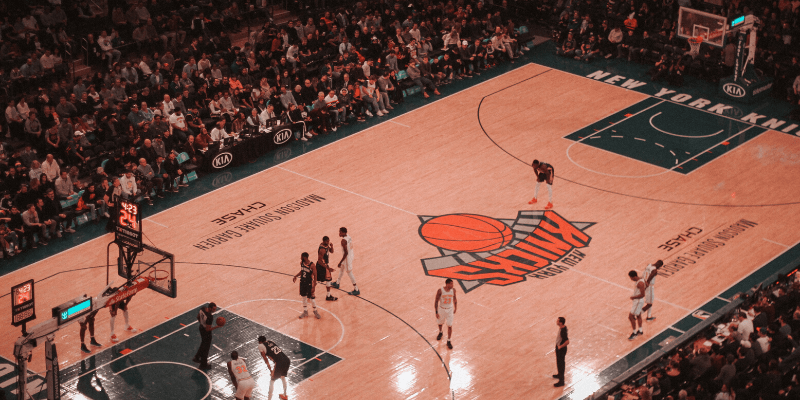 NBA teams are made up of the best basketball players from around the world. Every team has a range of players with different styles, skills, and specialties. However, have you ever wondered how many players every team can have? If so, this is the article for you.

We’re going to look at how many players are on every team, how many can be active, and take a closer look at the general makeup of most NBA teams.

How Many Players are on an NBA Team?

The answer to this question depends on how far into the NBA season teams are. In the offseason, a team can have up to 20 players signed. The offseason is anytime after a team’s last game of one season, and before their first of the next.

There are also no minimums, so technically a team could have zero players during the offseason. Once the regular season starts, however, an NBA team is only permitted to have up to 15 players through the duration of the regular season.

Teams are required to have a minimum of 14, except for a two-week period where they can have 13. So to answer the question, there are either 14 or 15 players on an NBA team in most cases.

However, every team is also allowed to have up to 2 “two-way” contracts. These are players whose salary will depend on which league they are playing in (either the NBA or the G League). Also, if the roster of a team is suffering from a lot of injuries, there is something called a hardship exemption that can allow teams to carry more than 15 players.

How Many of These Players Can be Active?

These inactive players can be players the team simply doesn’t want to play, or could be injured, as the NBA doesn’t have a separate injured reserve like many other sports. This is rule is reflected in the NBA collective bargaining agreement that was ratified in July 2017.

The players that are active and inactive can be changed whenever a coach or team sees fit. Active and inactive lists often change daily for many NBA teams. Also, players who are suspended for any reason don’t count against an individual team’s roster count.

As for the reason for only 12 or 13 players being active, there isn’t one given. It is seemingly an arbitrary number that officials and those who adjust the rules feel is right. Most teams only end up playing around 9 or 10 players most games anyways.

The Makeup of NBA Teams

As you likely know, there are five positions that players play in the NBA. There are point guards, shooting guards, small forwards, power forwards and centers. Each position has its own duties and responsibilities on the court.

For example, a point guard is usually the primary ball handler and passer, while the center clogs the lane and protects the paint. However, as the game advances and moves forward, many players blur the line between two or more positions.

For example, one team might want to roster 4 centers and only 2 point guards, while another team may go with 5 power forwards and only a single shooting guard. There are endless different ways to build an NBA team of 15 players. As you could imagine, most teams opt for a fairly balanced approach featuring a fairly even amount of every position.

In conclusion, there are 14 or 15 NBA players on a team and 12 or 13 can suit up for a game. Hopefully, this article has not only helped you to understand how many players are on an NBA team but also the general makeup of those teams and how many players can actually play. It can be complicated to keep track of all the requirements and rules, but I hope I was able to assist and make it a little easier.

If you could put together your own team of 15 NBA stars, how would that team look? Let us know below in the comments!