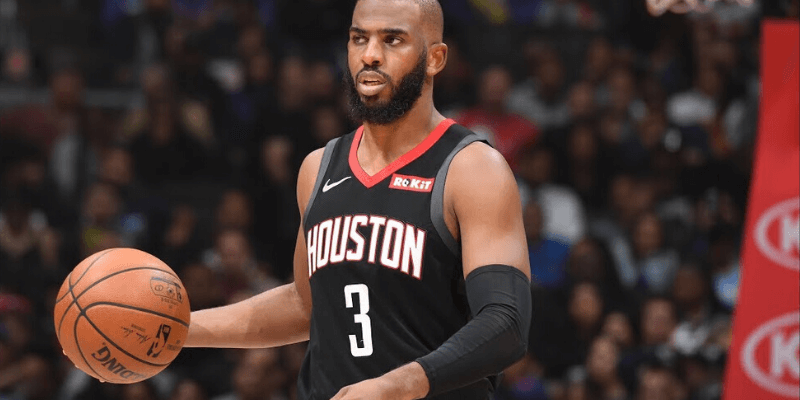 Possessing good ball-handling skills gives you an added advantage over your opponent. Unlike height, which cannot be taught, these are skills that can be improved with time. You can cross a defender to get enough space to make a shot, or you can use these skills to perform a calculated pass.

Some of the top players in the NBA are superb ball-handlers. Playing one-on-one with them can be very risky because they might end up embarrassing you. You’ve probably seen defenders falling to the ground when such players countered them with their ball-handling moves.

Let’s take a closer look at the skills possessed by these players and different occasions when they pulled off some amazing moves.

Paul is one of the greatest point guards of all time. His offensive gameplay is fast, and he can dribble past you easily. Paul is also good at cross overs and performing his signature step-back move to create enough space for a shot. His passes are precise and accurate and he loves to throw alley-oops to his teammates for a highlight finish.

Once Paul possesses the basketball, it is hard for defenders to create a turnover because he changes his direction easily while dribbling. Coaches have been inspired by his ball-handling skills and they are teaching kids the Chris Paul drill.

Curry is one of the best shooters of all time and, due to the amount of time he spends on his game, it doesn’t come as a surprise that his ball-handling skills are also good. He creates enough space to shoot by making a skilled move like the step-back. Curry also uses the ankle-breaker move to dribble past defenders and finish at the rim. His cross-overs are done effortlessly and in an agile manner.

Curry’s dribbling is solid and compact because he maintains the ball at a low level. This is always an advantage for the Golden State Warriors because they have fewer turnovers.

Rubio, a 9-year NBA veteran, has some of the most flashy moves in the NBA. He has a killer spin move, which makes it easier for him to by-pass his opponents. Ricky’s gameplay is very similar to Pete Maravich’s entertaining style of play. He is also a very patient player when it comes to passing. His roundabout pass is often admired by many basketball players because he takes his time to find the perfect opportunity to pass the ball accurately.

Everything that Pete Maravich did on the court was stylish. His passes were swift and accurate because he had perfected some highly original and groundbreaking passes for his time. Some of Maravich’s moves were so complex to the point where referees blew their whistle to stop him because they thought he was breaking the rules. Pete Maravich argued that they were not offenses because such moves had never been seen before.

Rajon Rondo is one of the few players who has his own signature move. His signature move is a fake pass, which is referred to as ‘The Ron-do’. To perform that move, you have to cup a basketball in your dominant hand at a right angle to the forearm, carry it on your back, and fake a backhand flip. He uses that move against his opponents before going for a lay-up finish at the rim.

Ever since Derick Rose was recognized as rookie of the year and the youngest MVP, numerous debates have sparked up to compare him with Michael Jordan. He led the Chicago Bulls to one of their best records in the league since Michael Jordan left. Derick possesses some skilled moves. His crossovers often leave defenders lying on the floor helplessly. His skillful moves are also compared to Michael Jordan’s gameplay.

During his prime, Dwyane Wade was one of the most athletic players in the league. His athleticism aided him in perfecting some skills that had been already been introduced to the league, like Manu Ginobili’s Euro step. After the move was popularized by Ginobili, Wade studied and improved the move to the point where defenders found it impossible to stop him.

He also owns one of the most effective pump-fakes, which made it easier for him to take uncontested shots. Wade’s skill were countless, which is why he will be a unanimous selection for the Hall of Fame when he is eligible.

Steve Nash is one of the greatest point guards in the history of the NBA. He had the same shooting ability as Steph Curry. Defenders were always on the lookout for him on the court to keep him from scoring. However, he had perfected the step-back move, which gave him adequate space to shoot. Steve was also an excellent passer and was good at crossing defenders who tried to steal the ball from him.

Parker was a player who had perfected some skillful moves that made guarding him very difficult. One of his most utilized moves was the spin dribble in the lane for a layup. He was very versatile and could perform the spin from either side of the court. Parker also had a signature move, which was referred to as ‘Tony Parker’s Teardrop’.

Crawford had some of the best crossover moves in the league. Crawford doesn’t agree with dribbling drills done not around in-game situations and crafted his ball-handling practice around shooting and pickup games. His crossover skills, like many other of his moves, were done naturally in games and could be in large part to his drill work revolving around in-game moves.

Ball-handling is an essential basketball skill that makes your game that much more dangerous if you perform them at a high level. They give you an advantage over your opponents unlike any skill, including shooting. These skills are fun to learn and perform once you have mastered them as cross overs, ankle-breakers, and step-back moves can be used to make your opponents look silly on the court.

The players we covered above have and had their own unique style on the court and you can create your own image through practice and hard work on your game and most importantly your ball-handling.

Do you have any other thoughts about ball-handling? Let us know in the comment section below.