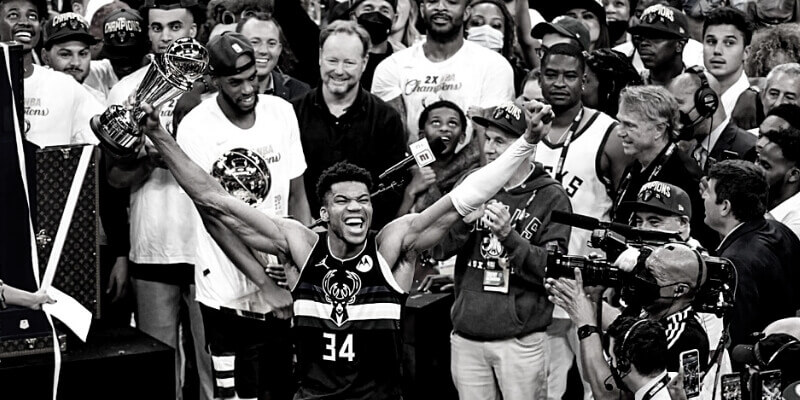 To raise the NBA championship trophy is to reach the summit of the sport. For fans, nothing gets better than watching the team you’ve stuck it through, become the best in the world. Every championship is remembered and cherished in history books, in hearts, and on heads.

Every time you see an NBA team win it all, you will see such commemorative hats go around to mark the championship. For fans who went along the journey with their teams, through the tough season and exciting playoffs, it is proper to get the gear to cherish the championship.

With this list below you can find every NBA champion from the Los Angeles Lakers in 2009 to the Milwaukee Bucks in 2021. A decade’s worth of champions and a decade’s worth of hats. Along with the commemorative championship hat, we paired a list of generic team hats and our picks of each.

The first NBA championship to be won in Canada. As well as the first championship won in Toronto since the ‘90s when the Blue Jays took the MLB World Series twice. The Canadian squad spoiled the Golden State Warrior’s potential threepeat.

Kawhi Leonard’s giant hands carried the championship trophy into Toronto, who had been signed under a 1-year contract. After winning the 2019 championships, Kawhi would leave for the Los Angeles Clippers and join super-star Paul George.

While I am usually in favor of New Era hats, this bright red championship hat by ‘47 is amazing. The beautiful and deep red of the hat is the right kind of loud that Raptors fans should rep.

What would be the last chapter in a 4 year series between the Golden State Warriors and the Cleveland Cavaliers. Steve Kerr and his prolific line up of scorers breezed past the LeBron and the Cavs.

What makes this New Era hat great, is how well it combines the championship trophy and one of my favorite mantras of the Warriors franchise. “Strength in Numbers,” numbers of points, 3s, fans, and championships.

The New Era Strength in Numbers Warriors caps symbolizes a dynasty, one that changed the face of the NBA and the game of basketball.

Kevin Durant was highly criticized for joining the Golden State Warriors after losing to them in the playoffs the season before. He silenced those critics by having a monster performance throughout the and finals, eventually winning the finals MVP award.

The win came in a decisive 5 game series, with the Warriors only losing one game. LeBron James and company could not defend their championship in their 3rd of 4 meetings with the Warriors. The scoring trio of Curry, Durant, and Thompson was just too much for any team in the league to handle.

I’m especially favorable to the 9Twenty model of New Era hats, and the beautiful spanish blue base of this hat makes it something I’d love to wear every day. The hat design and guaranteed quality of New Era make this Warriors Championship hat my favorite of the list.

LeBron James returns to his home state after his Miami excursion, the state that grew him, drafted him, and claimed James as King. Paired with a new head coach in Tyronn Lue, LeBron finally brought the NBA championship to Ohio in a dramatic game 7 wins.

While the New Era 9Fifty Cavs championship hat is as expressive as the other years, I believe it’s the best championship hat for this year. Knowing New Era, you can be sure the hat will be top quality, with the best stitching.

You should really check out our pick of the generic Cleveland Cavaliers hat, the alternative logo and great two-tone color base make for a great hat.

The 2015 Golden State Warriors began a dynasty that would dominate the west for 5 straight years. By the end of it, the Warriors would win 6 championships, 3 of them coming during the years of: 2015, 2017, and 2018. The 2015 championship would be the first in Oakland since the move.

Coaching the Warriors was former Bull’s sharp-shooter Steve Kerr. Kerr would build an offense that unlocked the potential of a shooter. The champion to his offense, undersized point guard Stephen Curry. After his third ring, Curry would be known as the best shooter of all time.

For the first championship of the dynasty, I wanted to go with this classic design from Adidas. Compared to the other designs from 2015, this black and spanish blue cap would look the best for every situation.

The 2014 championship would come a year after they would lose to the finals in an exciting 7 game series. A rematch against the Miami Heat would prove that the mastery of Popovich and the team’s hunger to win was too much for LeBron and the heat.

Oddly enough, there is no commemorative hat for 2014 available. Luckily, there is a great looking championship hat from 2005. The cyan base of the hat is a throwback to the fiesta colors the spurs used to rock in the 90s. Since the 2005 championship came from the dynasty (minus Kawhi), I give it 2 thumbs up.

If you think the primary Spurs logo can look a little dry in black and white, then you’ll be pleased to lay your eyes on their fiesta gear. The fiesta logo and style was popularized in the 90s with the spurs. While the team rocks a modern black and white now of days, the fiesta colors are still well celebrated in Spurs nation.

Possibly the best NBA Finals series in the modern age. 7 exciting and league shaking games between the defending champs Miami Heat against the kings of the 2000s San Antonio Spurs. The big 3 of Miami vs the wonder and class of Gregg and the Spurs.

James, Wade, Bosh, and Spoelstra would pull it through in the end. The championship would be LeBron’s second of his career and would inspire him to push himself and the sport to a new level.

The choice of this Adidas hat was easy, since it was the only commemorative hat for the 2013 champions. Luckily it’s a great hat. The iconic white hat base of the hat is just like the white Miami likes to rock at home. Where the hat really shines is on the back decal.3 banner like embroideries to commemorate the 3 historic championships won in Miami.

The return of the Big 3 from South Beach, after failing the year before to topple the Dallas Mavericks, Wade, Jame, and Bosh came back with a mission. The second full year together proved too much for the league to handle.

LeBron would win his first title, and the Big 3 proved to the league that they were more than just hype. A had loss for the OKC Thunder, a team that featured 3 players that would eventually win the regular season MVP. Sadly, winning a single finals game would be the closest they would ever get to a title.

An alright hat for the only choice. Another Adidas exclusive year, if I had to choose between the Miami Heat 2012 hat and the 2013 hat, the 2013 hat (featured above) is streets ahead of this one.

My favorite hat on this list, mainly because I am a die-hard Mavericks fan. I watched first hand as a young fan as Dirk, Kidd, and the JET (Jason Terry) take the game to team Hollywood.

Just an overall great hat. The New Era quality you can expect, but on their famous 59Fifty model. Specialty fitted hats that will give you are really clean tailored look and feel. The front design is also very interesting and different.

Both choices for this year are really great, but the details on this hat make it special.

Another saga in the endless rivalry between the Boston Celtics and the Los Angeles Lakers, a rivalry that has gone through dynasties and generations. The 2010 match-up a rematch of the 2008 finals. Which had the Boston Big 3 of Pierce, Garnette, and Allen winning over Kobe and the Lakers.

After losing in 2008 the Lakers would come back with a vengeance in 2009 and 2010. Winning back-to-back championship as Kobe headed into the twilight of his career. This would be the final of 5 championships of the Black Mambas career.

This hat has to be the coolest on the list. While I wasn’t much of a fan of the Adidas hats for the Miami championships, I am in love with the Lakers championship series. The gold is bright, a great use of the alternative “LA” logo, and finally the back. 16 banner like patches on the back of this hat to commemorate the beautiful history of the Lakers.

For a Lakers fan hats don’t get much cooler than this.

The Kobe Lakers dynasty will be one that will be never forgotten. Los Angeles, Hollywood, and Kobe Bryant, the showstopping games in the Staples Center are written deep into the NBA history books.

2009 was an exciting year, as the Lakers coming off a loss in the finals last season, they would come back for two straight. In 2009, they would breeze past the Orlando Magic. 2010 was the big year when they would rematch against their historic rivals the Boston Celtics. The team who beat them in 2008.

Our Pick: No hat available this year, see the section above for Lakers championship hats from 2010.

Unfortunately, there are no hats available for this year, but the commemorative hats of 2010 will more than make up for it. Laker nation may be the biggest in the NBA, so I’m sure if you look long enough you’ll find the exact hat you want.

A lot of hats featured on this list are made by New Era. Mainly because New Era is the official hat of the NBA, per team New Era will release a couple of hats a season. As a manufacturer, New Era has different model hats which they use.

The most common is the 9Fifty, or snap-back. If you want to know more about New Era hats, and New Era’s basketball line, check out our other article here.

The key difference of the 59Fifty is that instead of a snapback, the hat is a single fitted size. Which gives the hat a more tailored feel. If you decide on a 9Fifty hat you like, maybe see if they offer it in the 59Fifty model. Be sure to measure your head and refer to the guide in the article linked above to get the right size.

If you find your team on this list then count yourselves lucky. Some fans may never that feeling of game 1 of the NBA finals. You owe it to yourself and your team spirit to get one of these hats.

Even if you are new to a team’s fan base, the first step from going from a bandwagoner to a die-hard fan is to celebrate the years you missed out on. Then after a couple of seasons through the tough of it, you can claim your real fan card.

As a fan, the hardest times of the season can be taxing, remember your team’s highs with some commemorative gear. So that when they get back to that summit, you can wear your legacy gear with pride.