How Much Do NBA Cheerleaders Make? 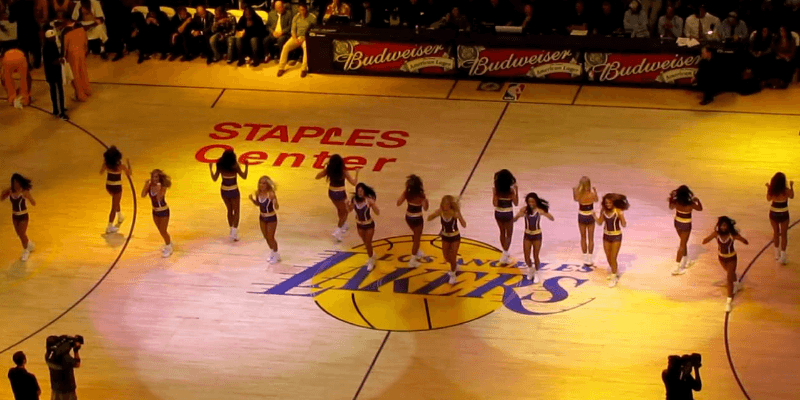 The life of an NBA cheerleader may look glamorous from an outsider’s perspective. When fans attend an NBA game, they see these young beautiful women with great tans and makeup smiling at the crowd and hyping them up during the game to enhance the fan-going experience. During stoppages in play, the cheerleaders make it look easy, wowing the crowd with choreographed dance routines. All eyes are on them, and they look happy to be in the moment.

The short truth is they are happy to be there. In fact, the love of the crowd, the game, and dancing may be the things that keep them coming back because the salary for cheering isn’t all it’s cracked up to be. Yes, they see the court as much as the players, but what is their pay in relation to the superstars? This article will break down the life of a cheerleader, and how much they get paid for their efforts.

How Much Do Cheerleaders Make? We Break It Down

In 2017, ESPN reported that cheerleaders made between $75 and $150 per game. This may seem good from an outsider who thinks, “not bad for a three hours game,” however, once you know everything that goes into the job, that amount becomes very small in relation. Another thing to remember is that cheerleaders are considered independent contractors meaning that they do not receive health insurance or benefits from their cheerleading gigs.

Most of professional cheerleading involves elaborate dance routines and choreographed moves set to music, which means lots of practice time to perfect those routines. Most cheerleading teams practice around eight hours per week. Some teams get a practice stipend of around $30 per session but others factor the practice times into the overall pay per game.

If you live in a professional sports city and have been to events in your area, you may have seen representatives from the local professional sports team’s cheer squad to help greet fans and boost the energy of the event. Those events also take time and, while most teams pay their cheerleaders another stipend for special events, their travel expenses, especially for a local event, aren’t always paid. All of these tiny expenses add up during a full calendar year.

Like the players on the team for which they are cheering on, cheerleaders are required to be at the arena hours before tip-off to prepare the finishing touches on their routines, get dressed and ready to cheer, and entertain fans as they enter the arenas. Some cheerleaders have reported a gameday schedule of 6-8 hours. Now when you hear they make between $75 and $150 per game, you may have a different reaction knowing the ins and outs of the job.

After reading a breakdown of the rigors of being an NBA cheerleader and hearing their pay, you may be thinking the same thing I did when I researched the situation: cheerleaders need more money! This sentiment is shared across most pro sports leagues and the NBA is no different.

In 2017, the Milwaukee Bucks settled a three-year-old lawsuit with former cheerleader, Lauren Herington, who claimed the team failed to adhere to the U.S.’s Fair Labor Standards Act. Herington reported that she was paid $30 per practice, $65 per game, and a special appearance fee of $50 per event. Herington sometimes put in more than forty hours per week, without overtime, and calculated her pay at $4.50/hour, way below the minimum wage rate.

There have been other lawsuits filed by cheerleaders in the NBA and other leagues that didn’t go as well. The Buffalo Bills disbanded their cheerleading team “The Jills” rather than give them a raise. While many cheerleaders enter the profession well aware of the pay issues, some still view this as a labor dispute and not just cheerleaders asking for more money from their professional sports organization.

Cheerleaders do get some benefits that go along with their pay, although it is argued that these aren’t quite enough to make up the pay difference.

One such perk is an extra pay bump if you get selected to cheer in the NBA All-Star Game, with travel expenses covered as well. Cheerleaders also get more money to cheer if their teams make the playoffs and are given free tickets to games and free parking at the arena. Some even get their travel expenses paid for to and from games and special events. While these perks are more than the average fan, is it enough to cover the low pay?

So, if the long hours and the low pay are such big issues, why do cheerleaders go through with it? Well, as we said earlier, some cheerleaders go into it understanding that they will be underpaid and they are ok with that.

Some of the girls cheer because they have always been cheerleaders and they love being on a team with the other girls. Their social lives revolve around the games and their friends on their team. Anyone who has ever been on a great team can attest to the bond you build with your teammates and the great times that accompany the work.

Most professional cheerleaders are dancers and love creating dance routines and performing in front of an audience. They also know the workout you get while dancing is second to none and they value their health and physical fitness. To many, it is a free dance workout three to four days a week which they would have paid for at a studio anyways without the glamour of the big lights, loud music, and the crowd.

To many young women in big cities, the thought of being a cheerleader for the team’s NBA franchise is exciting. They may be finishing up their college degrees or like cheerleading as a way to stay in shape for potential acting and modeling gigs and love the excitement of the game and atmosphere. Anyone who has been to a live sporting event can attest to the intoxicating feeling you get when the crowd is at top decibel after a big play. Now imagine being a part of it!

The life of an NBA cheerleader is a rollercoaster. It can go from being exciting to exhausting to infuriating (when you receive your paycheck) all in one week. But many will tell you that there is no greater feeling than being in the thick of the action cheering on your favorite team. So, while the debate for cheerleader pay isn’t going away anytime soon, it looks like the issue has been given the stage by those advocating for improvements in the job.

Do you enjoy watching the cheerleaders at your sporting events? Do you feel like they are underpaid for the skill and athleticism they are showing? Let us know in the comments section below!