How Much Does The NBA Commissioner Make? 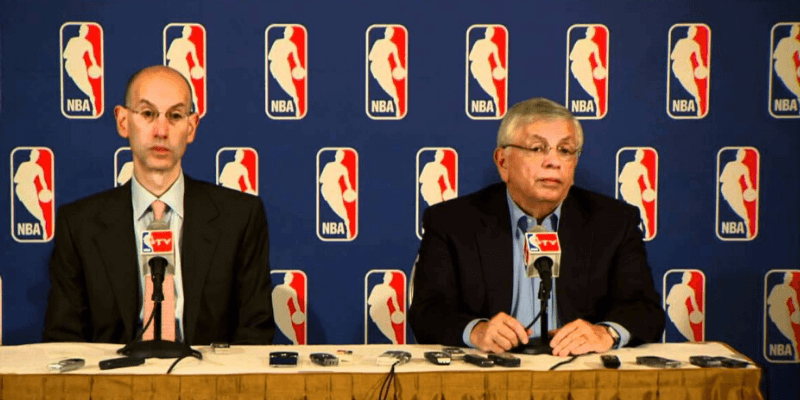 Every year, since 2014, we see NBA Commissioner Adam Silver standing at the podium at the NBA Draft calling out the names of the new talent and next generation of NBA superstars. Commissioner Silver is one of the most liked and well-respected commissioners in professional sports and you know this by the always warm reception he gets during draft night and the way the players and media revere him.

Most, including players, coaches, owners, and fans, would agree that Mr. Silver has been a quality leader for one of the most popular leagues in the world. I would argue that many would also say that he deserves whatever salary the NBA pays him. So, how much does the commissioner make? Why does he make that much and what has he accomplished since he has held the position?

Adam Silver, the Commissioner of the NBA is reportedly earning an estimated $10 million a year and is under contract through the 2023-2024 season and has been his salary since becoming commissioner back in 2014. Silver has publicly taken a 20% pay cut to assist with those in the league economically affected by the Coronavirus so his updated salary is $8 million dollars for the foreseeable future.

Why Do They Pay Him So Well?

You might look at his duties as commissioner and say, “Wow! They get paid that much to organize basketball games, announce names at the draft and show up at pretty much any game they want?” It sounds like a fun and easy job, right? Well, it may be fun and exciting at times, but it is far from easy. The job of commissioner of a professional sports league is actually an extremely difficult one.

The rigors of Commissioner Silver’s job is demanding and extremely stressful. First and foremost, they are constantly promoting and marketing the league to all current and potential stakeholders, including owners, sponsors, players, and fans. In the old days they may have only been worried about promoting the sport in their own country, but in today’s world sports are global and they must find ways to build a fanbase around the world.

The commissioner is also responsible for handling disciplinary issues. They must decide what types of actions are punishable both on and off the court and they must make a decision on what type of punishment fits the crime. This can be fairly difficult with superstars that you need to have on the court to garnish attention to your overall product. Too lenient a punishment may give people in the NBA an impression that their leader is soft on consequences.

Negotiating contracts with television and broadcast companies is probably one of the more important behind the scenes roles of a commissioner. Those big contracts to broadcast games are what brings in the majority of the league’s revenue. They also work out deals with sponsors, merchandisers, uniform and equipment suppliers, and much more.

Another difficult aspect of the job is working out labor agreements with the NBA Players Union. These contracts and agreements determine the stipulations – salary caps, scheduling, league policies, and much more – of the contract between players and the league. If the players or owners disagree on anything involved it could derail seasons and give the league a bad reputation in the eyes of fans and sponsors.

This is a high profile and high-stress job that many are not cut out for because every decision is closely scrutinized by the players, the union, fans, and the media. Needless to say, the job is so much more than what you see him doing at games or during press conferences. These leaders of their respective leagues really do earn their money.

What Have They Accomplished?

Adam Silver’s popularity as NBA Commissioner has served him well and helped him accomplish a great deal since 2014 when he took over from his predecessor David Stern. He had some big shoes to fill because David Stern is known to have brought the NBA back from its dark years in the late ‘70s and early ‘80s.

David Stern was the commissioner for 30 mostly fruitful years. When he took the job in 1984, there were rumors that the league was ready to fold. Many teams were losing money and fan interest was fading. Regular season games were rarely televised nationally and a majority of the playoff games could not even be seen. In fact, many games, including the NBA Finals, were not shown live but on tape delay in many markets.

Stern spearheaded multiple innovations to grow the spotlight of the league. For one thing, he let the players be themselves and show their personalities. He sold stars to the fans and sponsors and it paid off big-time. With the advent of new cable stations such as ESPN and TNT, he set up deals with the networks to air regular-season games weekly and full coverage of the playoffs.

Expansion teams created excitement in new cities and he also began expanding outside of the United States by marketing and broadcasting games around the world. Many will say that he also had help from an influx of stars, like Larry Bird, Magic Johnson, Charles Barkley, and, most importantly, Michael Jordan, who helped take the league to new levels of popularity.

Stern, along with Jordan and his long list of superstars, continued to grow the NBA’s footprint through the 1990s. Stern built on this and continued the success by starting things like the WNBA, The NBA G-League and NBA League Pass, an innovative method of watching every single NBA game each season.

When Adam Silver took over in 2014, the popularity of the league was roaring and it has continued an upward tick under his leadership. Silver joined the league in 1992 and became deputy commissioner in 2006. Having worked under Stern for so long, Silver observed the job and learned how to grow and sustain the popularity of professional basketball. For the most part, he has continued on the same path as his predecessor.

From the beginning of his reign, Silver had to deal with tough issues. In 2014 he took a strong stance against Los Angeles Clippers owner Donald Sterling, who was recorded making racist remarks. Mr. Silver quickly forced Sterling to sell the team and banned him from the league, earning positive favor from everyone involved for his stern stance. This set a precedent showing that Silver would be a strong leader, making quick and decisive moves.

In 2017, Silver successfully negotiated a new labor agreement with the players association that will keep the players on the court at least until the 2023-2024 season. If neither side opts out in 2023-2024, the deal could continue until 2030.

Adam Silver has been dedicated to continuing the worldwide growth of one of the most diverse sports in the world. He has embraced new technology and media and has always been open to innovative ideas. Since he became commissioner, the league has only grown in popularity and revenue. Around the world, NBA basketball is one of the most exciting and marketable leagues out there.

The commissioner of the NBA has a tough job and earns every bit of their salary. With countless decisions and negotiations to be made in the public eye, the stress could be overwhelming. In this new era, the league continues to thrive more than ever and while it is the basketball that fans come to watch, the leadership has continued to steer it in the right direction.

Who has been the best professional sports commissioner ever? We’d love to hear from you, so please leave your comments.