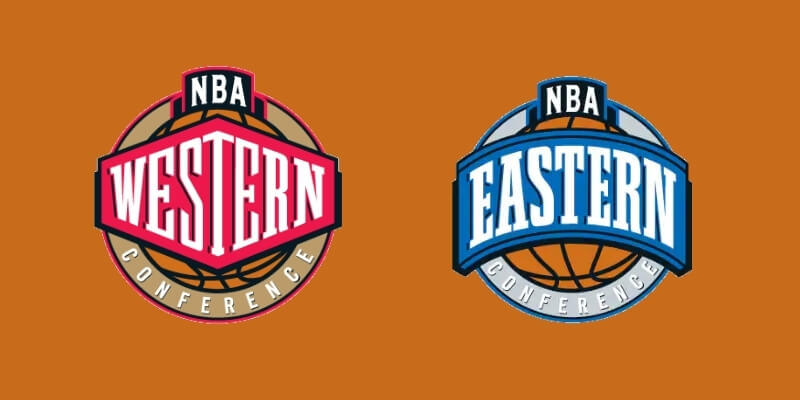 The NBA Finals usually match up the league’s two best teams. To get to the Finals, however, those teams have to beat out everyone else in their conference – either the eastern or western conference – for a chance to be the NBA’s top team. Those conferences are very different, however, in the teams that play in each.

This article will take a look at the NBA’s Eastern and Western Conferences, and dissect what makes them similar and different. Even if you are well versed in the league as a whole, stick around. I bet you will learn something new about the NBA’s decades-old conference system.

The league wasn’t broken up into an Eastern and Western Conference until the 1970 season. On August 3rd, 1949, there was a merger between the NBL and BAA basketball leagues to form the National Basketball Association (NBA) as we know it today. Except it was nowhere near how we know it today.

In 1949, the league consisted of 17 teams all located east of Missouri except for the Denver Nuggets. Back then, the entire league was essentially the Eastern Conference. Beginning in 1966, starting with the Chicago Bulls, the league began adding teams rapidly in what is known as the Expansion Era. After the Bulls came the San Diego Rockets (now the Houston Rockets), Seattle Supersonics, and Phoenix Suns, all teams located in the far western part of the country.

The league was on the brink of realignment and needed to do something to help reduce the travel load of each team. With the addition of the Portland Trailblazers a couple of years later, the idea of splitting the league into two conferences made perfect sense.

In 1970, the decision was made to split the league into an Eastern Conference and a Western Conference. The average NBA salary in 1970 was $35,00, which wasn’t terrible, but also isn’t the money guys are making today. Players often flew coach in 1970. I am six feet tall and find airplane travel difficult. I could only imagine a six-seven guy trying to squeeze into a normal seat for hours after playing an NBA game.

By then, the league consisted of 17 teams with more to follow a few years later. The league grew again in 1976 with the NBA/ABA merger. The ABA had been an upstart league that competed with the NBA for a decade until money problems and low popularity of the sport put them under. The NBA almost suffered the same fate until Magic, Bird, and the stars of the ‘80s saved the league.

The NBA now consists of 30 teams and is booming with popularity. In fact, NBA basketball is one of the most watched sports across the world.

Both conferences have differences and similarities. Let’s take a look.

For more context of where the teams fall on a US map, check out this image.

The map breakdown still shows a larger concentration of NBA teams still located from the middle of the country east, but not as drastic as the early years when the furthest western team was the Denver Nuggets.

The funny thing about the divisions is that I actually had to look up their names for this piece. I am a diehard NBA fan but the divisions have essentially no bearing on outcomes at the end of the year. It isn’t like the NFL where the winners of each division get playoff bids.

Generally, the best NBA team in each division does make the playoffs, but no one cares about winning divisions at all. This leads to a somewhat controversial question.

If you were to answer quickly, you would probably say: yeah, it is a good way to categorize the teams and helps with playoff seeding. You may also point to the travel aspect which should help players during a long season right?

Now think hard about this question. As multi-millionaires who travel on luxury private jets, usually with all of the treatments and dietary guidelines met during road trips, is travel really wearing out these guys? Sure, traveling anywhere is going to make you tired, but as much as these athletes get pampered, and paid mightily in the process, is travel really an issue anymore?

As for the playoff seeding argument, many are wondering if it matters that each conference is represented evenly come postseason time. The Western Conference usually outperforms the Eastern Conference in the regular season.

Oftentimes an Eastern Conference team will make the playoffs with a record worse than several Western Conference teams just because of conference alignment. Shouldn’t NBA fans want the best product on the floor even if it means ten teams from the West make it and only 6 from the East do?

In 2000, the 8th seed for the East was the Indiana Pacers with a 41-41 record. In the West, the Houston Rockets and Seattle Supersonics (RIP) missed the playoffs even though their records were 45-37 and 44-38 respectively.

The reason? Because the Pacers were in the East and the Rockets and Sonics were in the West. If scenarios like this don’t sit well with you, then dropping conferences may be a positive.

The split between the East and the West in the NBA was done initially with good intention. The league grew at a rapid rate between 1966 and 1974 and changes had to be made. The conference alignment eased many teams as it pertained to travel and made the game more competitive.

However, there aren’t many differences in the conferences other than location. This brings up an interesting fork in the road for the league. The future for the league looks bright but conference play may see an end in the future.

Are you an Eastern or Western Conference fan? Let us know in the comments section!