What is NBA League Pass and Is It Worth It? 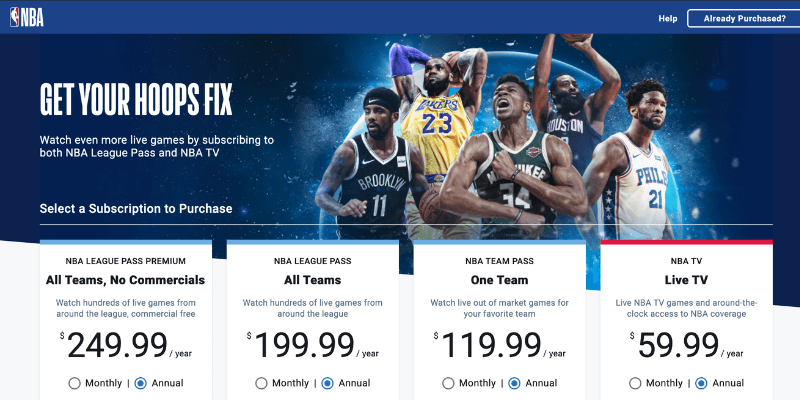 If you want to watch NBA basketball games in the most convenient and personalizable way, nothing can compare to NBA League Pass. You will get the best digital access to live NBA games, as well as streamable videos of games that have already aired.

It really is the only reasonable choice if you want access to NBA games on your digital device, or through your TV provider. Download games to watch on your daily commute or host NBA game parties. We’ll give you everything you need to know to figure out if this service is right for you.

What is NBA League Pass?

NBA League Pass is the NBA’s premium digital service which allows you to watch games. As more and more people switch off their traditional TV in favor of online digital services, the NBA made sure to be ahead of this digital trend. It has been live since the 1995-1996 NBA season, long before Netflix and Hulu.

The service allows you to stream live NBA games onto a device of your choice. Not only do you get to pause, start, and rewind live games, you can view finished games right after the broadcast. Meaning you have access to the whole NBA season no matter where and when.

Where can I watch NBA League Pass?

Watch NBA League Pass on your:

Can I Watch NBA League Pass in Other Countries?

Where Do I Sign Up for NBA League Pass?

Simple, just go to the NBA League Pass Website, and choose one of their three packages. After you have decided which package is best for you, you will need to create an account with the NBA. Choose either Paypal or through a credit card, check-out and you’ll be ready to go.

What Features Does NBA League Pass Come With?

Some games you can enable different broadcasters and game announcers. Either Home, Away, or the National broadcast. Specialized broadcasts will give insights on their team that you wouldn’t have gotten from the national broadcast.

Certain games will have Spanish, Portuguese, Korean, and Mandarin casters.

With the specialized web player, you can watch up to 4 games at one time, using different viewing modes.

Sometimes you just don’t have the time to watch the entire game, and highlight leave you unsatisfied. NBA League Pass provides a condensed game format, which takes the entire game and reduces it to around 15-mins.

Besides the fully-featured NBA League Pass, there is an option to subscribe to “team choice.” Instead of getting every game in the season, you choose your favorite team and you can watch all of that one team’s games. For a reduced rate of course.

The Team Choice option still allows you to watch on mobile and download games onto your device. If your team advances, you will get full access to their play-off games and the finals, if your team makes it that far.

The budget option NBA offers is the 3 Game Choice, where each month you can watch and save up to three games out of that month. It literally comes down to $1.99 a game, so if there is a big game you want to see it might be worth it.

24/7 NBA content featuring expert analysis, documentaries, access to select WNBA games, and more. It is not included with the Team Choice option.

How Many Devices can Stream NBA League Pass at One Time?

Up to 5 different devices can be streaming on one account of NBA League Pass at one time.

How Much Is NBA League Pass?

League pass costs $90.99 annually, $10.99 Monthly, or $4.99 weekly. The NBA also provides an option to only watch the games of a single team at a cheaper rate. We provided a table below on their pricing and specific packages.

We did the math for you and came out with how much each game costs you per package. All calculations are done with the monthly rate, multiplied by 8, since it turned out to be cheaper than the annual rate.

Should I Get NBA League Pass?

Yes, but only the monthly package. Believe it or not, the annual rate is not discounted when compared to monthly. This may be because the annual rate takes into account the preseason, which makes it slightly more expensive than 8 months at $10.99.

Since you don’t occur any penalties for trying to opt out of a month and opting back into the NBA League Pass, the versatility is great since you can just cancel it at your discretion.

Mainly, the functionality of being able to replay games and watch with selected broadcasters is second to none. If you love NBA basketball, it’s an easy choice to get a League Pass.

These are the prices and packages the NBA League pass is offering during as of this writing. The NBA has been known to change the pricing at their own call, so it would be best to check out their website, to know their current prices.

Prices as of this writing (subject to change)

NBA League Pass has had over 20 years of experience, and as we grow into a new digital age, you can be sure the league will have a firm grasp on providing NBA games to their fan base. I love basketball, and if you don’t just yet, maybe give the League Pass a chance. If you’re like me, then getting a subscription is a no-brainer.

Leave a comment if you think NBA League Pass is worth a subscription, or if you have a better way of getting your NBA fix.