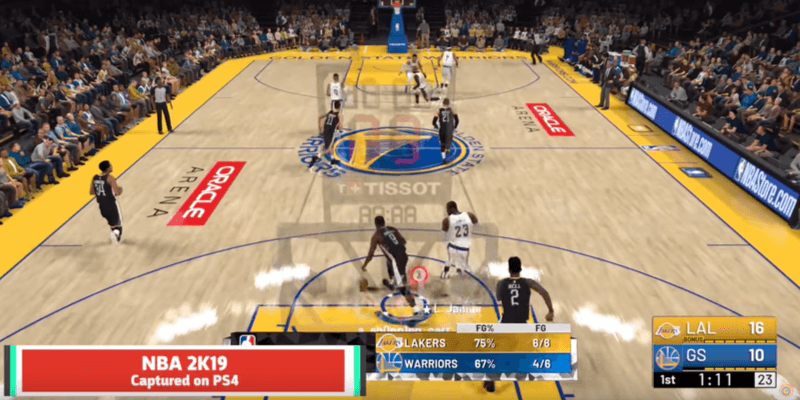 NBA games have been around since the NES back in the 1980s, and there have always been multiple choices when it comes to which game you want to play. All of those choices have dwindled away and now we only have NBA 2K and NBA Live left.

These are the only two basketball video games on the market right now, and you may be wondering which one is the best. Luckily for you, we have broken it down and listed all the pros and cons of each game so you can make the best buying decision.

There are a few things we need to look at when putting these two things head to head. We will choose one game as the winner for each section, and then an overall winner. Here are the specific criteria we will be grading:

When we take all of these things into consideration, we will come to the ultimate conclusion of which game is better, NBA Live 19 or NBA 2K19. Let’s jump right into it!

The player models in NBA Live 19 are bad. They only have a couple of body types, and the proportions often seem off. Definitely not a strong part of their graphics engine.

NBA 2K19 players look really good. While their body types are numbered as well, they do have more than Live and they look much better proportionally.

Here NBA Live 19 does a good job. The player faces, for the most part, are accurate to life. There are some players that are off, but all of the superstars and all-stars will look extremely life-like. The player faces in NBA 2K19 are really good. If you see a player, you will immediately recognize his real life counterpart. The one area where this isn’t as good is in the legend players, but for normal NBA play this is not an issue.

This is one area where NBA Live 19 shines. Literally. The floors in this game are incredible, and oh-so-shiny. The overall arena design and crowd feel is nice as well. This is one area that the Live franchise can be proud of.

The arenas in NBA 2K19 look great as well. The crowd buzzes during intense parts of the game, and the courts and sidelines look nice as well. It just can’t quite match the beauty of the Live courts.

While animations in NBA Live 19 are better than previous versions, they are still lacking. The movement feels floaty, but at least cutting and changing directions is sharp and concise.

This is the area that the NBA 2K team has spent a considerable amount of time and money. Their animations are so smooth that if the graphics were on par, you would think you were watching a real NBA game.

NBA Live 19 feels somewhat stiff when moving around the court. However, it isn’t so stiff as to make the game unplayable. Dribble moves and passes are easy to execute and feel kind of arcade style, which will appeal to some players.

Defending in NBA Live 19 is much like playing offense. A very arcade, simple system that any player, no matter the age can play. This makes it a much better family game, but a worse basketball simulation.

NBA 2K19 is the exact opposite. It is a very true basketball simulation, requiring players to know how to defend and run defensive schemes to be successful. This is a more rewarding experience, even though it can take some time to master.

The ball physics in NBA Live 19 are lacking. When you shoot a jump shot, if you miss and it hits the rim, it can often bounce off in a direction that is unnatural. This makes the game less immersive, and ultimately frustrating. There are also some instances of players clipping through other players, which is far from optimal.

NBA 2K has a history of clipping being an issue. It is still seen at times in the game, but much more rarely than in the past. Their ball physics are almost perfect, however, and that makes it much easier to grab rebounds on missed shots.

NBA Live uses real-life scenes from the likes of Stephen A. Smith and others at ESPN to create a realistic feel. However, it just doesn’t give your character a personality since he has no dialogue or player interactions to speak of. While there are some, it just doesn’t add “life” to the character.

NBA 2K19 has a full-fledged story built into the MyPlayer mode. You will get to go through your character’s life and times and play your way to an NBA great. It is one of the best experiences for a story in any sports game.

NBA Live 19 gives you a decent amount of options to make your character look as close to your real life self as possible. While the mode is rather new for this franchise, it is a positive look for the future as they can expand on it.

NBA 2K19 has possibly the best player creation suite for a sports game of all time. You can customize literally everything, and mold your player character into a masterpiece. Other sports games should take note.

NBA Live 19 has great multiplayer in The One game mode. You can take your character and pit them against others in a fierce online competition. It plays smooth and is one of the main reasons to be optimistic about the future of the franchise.

NBA 2K is the king of multiplayer online sports games, and that continues here. Jumping into the park and dominating the competiton with friends or strangers is a real treat. Let your competitive side out and rise the ranks!

NBA Live 19 has brought over the same team-building program you find in the Madden franchise in Ultimate Team. However, it is severely lacking when compared to the competition. While the card selection is decent and the gameplay is good, the lack of customization halts this mode in its tracks. You can’t customize your arena or jerseys, making this mode a no-go for us.

NBA 2K19 has a huge following for its MyTeam mode. Full customization, awesome player cards, and a top-notch online gameplay experience create a mode that is a joy to play. Just bring your wallet, cause it can get expensive!

This is an easy choice. NBA 2K19 is the better game, and definitely the one you should purchase. However, NBA Live 19 took a big jump for the franchise. The One is a fun mode and almost reason enough to check the game out alone.

Competition is a great thing, and NBA Live 19 brought it this year. That doesn’t mean it is better, just another choice. It is also not a bad idea to pick up both games, if just to play their single-player modes. Both MyPlayer and The One are great modes, and will be fun to play for any basketball fan out there.