How Much Do NBA Mascots Make? 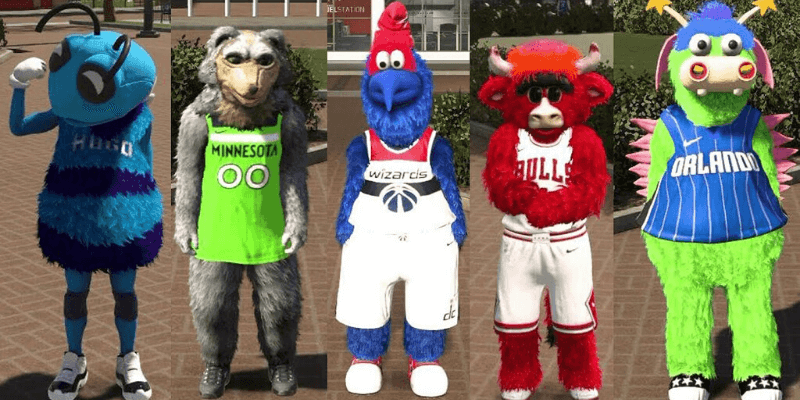 They are often the comedy relief during the game, serving to ease tensions during intense play. They cheer you up when your team is losing and they keep you pumped up when your team is winning. If the game is a blowout, they sometimes take over as entertainment for the entire crowd. NBA mascots are an integral part of professional basketball games.

These awesome entertainers can be seen in every arena around the league sporting their logos, colors, and team gear. In fact, they are an integral part of the organization due to their performance and the fact that they do get paid. That’s right, they aren’t just out there having fun for free. So, how much money do these crazy performers make?

It might be surprising to know that these characters can make pretty good money. For all the fun it looks like they are having, this seems like a great deal. The salaries, like many other professions, range pretty wide from low end to high.

Of course, it depends on their experience and what kind of talents they have. Some may make a little less and some may make more. In fact, some make quite a bit more. The highest-paid mascot in the league is said to be Rocky the Mountain Lion from the Denver Nuggets. He is reported to have made a whopping $625,000 a year!

No, I have never performed as a team mascot, but like multitudes of other fans, I have seen plenty of them perform. Living in Denver, Colorado, I get a chance to attend some Denver Nuggets games every year. The Nuggets’ mascot, Rocky is a great performer and entertainer and he really does earn his money. I have been to games at other arena’s and I don’t think I have ever seen a mascot that draws the type of attention that he does.

Rocky is almost always doing something hilarious and when he is not trying to be funny, he is great at getting the crowd pumped up for the home team. If you go to a game at the Pepsi Center, you will see him and his antics all over the arena and sometimes even out by the concession stands. You never know when he is going to appear in your section and do something wildly entertaining.

During breaks in the game is when a good mascot can really shine. In Denver, for example, they bring out the small trampoline and Rocky does all kinds of spectacular dunks. If he is not dunking he might stand at half court taking shots with his back to the basket and he will often make one or two.

There seems to be no limit to what this crazy mountain lion is capable of and it provides some awesome peripheral entertainment throughout the game. I am sure there are other mascots around who entertain the crowds in a similar fashion. They really do provide a valuable service to fans around the league.

From the looks of it, these silly characters run around all evening having fun and with the privilege of being on the court and up close to every NBA game. So why do they get to make such a good salary for doing this?

The answer is simple: it is a tough job and they earn every bit of it.

While it can look like they are just an ordinary person running around in an animal suit, that is far from the truth. These aren’t your typical high school mascots who cheers with the crowd. They are professionals who must train and understand the importance of performing and entertaining thousands of people who are technically there to watch a basketball game and not them.

Many of them are professional athletes, acrobats and stunt people who must train and practice their routines to ensure that they can perfect stunts like flying from a trampoline and dunking or repelling on a rope from the ceiling of the arena. They must also be in good physical shape as they have to perform these stunts at all 41 NBA home games.

These goofy characters are also actors who can get and keep the attention of very large crowds by finding ways to entertain them. Many of them come up with their own routines and creative ideas to keep the crowds upbeat and engaged in between the action. Some of them are local celebrities, showing up on local television ads and events.

There is one more very important thing that they do. These lovable creatures are ambassadors of the team and the National Basketball Association. They spend a lot of time outside of games, promoting the team and the league in many different ways, showing up at charity events in their communities.

So, where did this idea of having people dressed up as furry animals and other odd critters to provide extra entertainment at sporting events come from?

The term “mascot” seems to have originated from the French term “mascoto” which means “witch, fairy or sorcerer”. In the 1860s the slang term “mascotte” was coined to mean “talisman” or “sorcerer’s charm”. It was usually used in relation to gambling and they were seen as a good luck charm.

The exact start of the use of mascots in American sports is unknown but some point to its beginnings in the 1880s with the sport of baseball. The first known mascots were batboys who were seen as good luck to the team. In the mid-1880s some teams then began using real animals such as goats, dogs, and other animals that could be paraded along the sidelines.

The first known professional sideline performer was thought to be Max Patkin who was known as the “Clown Prince of Baseball”. Although his only costume was a traditional baseball uniform, his antics were probably the beginning of the type of performances we see from today’s mascots.

It wasn’t until 1964 that the first live costumed mascots made their debuts. Mr. Met appeared in baseball and Brutus Buckeye in college football. Then in the mid-1970s, one of the most famous mascots began performing at Padres’ baseball games. The Sandiego Chicken and his crazy antics set the standard for most modern-day mascots.

The crazy critters and their outlandish performances soon spread to all sports at every level giving us all added entertainment to these popular events. These cartoonish characters became so popular that there is now a Mascot Hall of Fame located in Whiting, Indiana.

I’m sure everyone has seen these wonderful performers on television and if you have not had a chance to see them in person, I strongly recommend it. They really do make attending your favorite sporting event, especially an NBA basketball game, that much more memorable.

Who or what is the best team mascot in professional basketball? We’d love to hear from you, so please leave your comments.