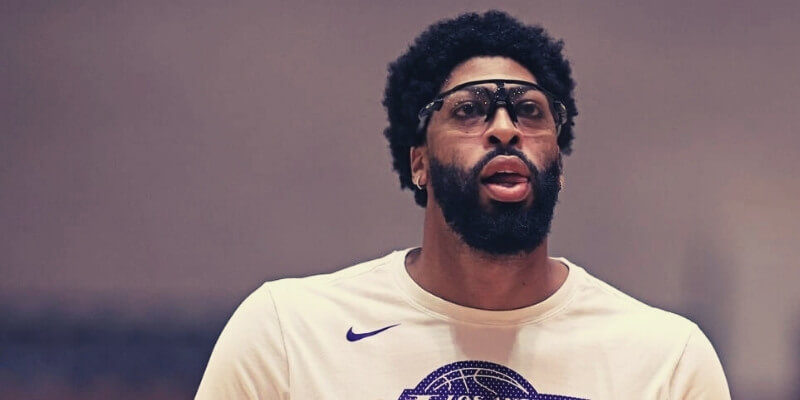 Some of the greatest athletes in the world aren’t immune to vision problems. Over time, the NBA has seen its fair share of players strap on eyewear. While jokes about players in Rec-Specs were a part of many of our childhoods, no one would dare to make those digs in front of the guys we’ll discuss in this article.

Granted, vision problems aren’t the only reason for wearing specs on the court. Let’s take a look at some of the most famous NBA players who have worn glasses or vision goggles.

Basketball is a game of inches. The quicker your reaction time, the more successful you will be. Getting your hands out to steal a pass on defense, jumping at the right time to grab a rebound, and finding the open man on offense all require quick reactions in basketball. Now imagine having vision trouble while trying to make these tough plays against the best in the world.

One of my college teammates went to an eye doctor and was prescribed goggles to wear during the game. He said that before wearing the goggles, he would guess on most of his shots. The rim looked like a blurry orange object to him. I can only imagine how much easier shooting came to him after his switch to goggles.

The same can be said for these goggled NBA players we cover in this article.

The players we touch upon here have a few things in common: they’re big guys who played in dynasties, won multiple championships, and became notorious for wearing vision-corrective lenses to excel.

Coincidence? Probably. But it’s interesting to see the impact that each player made on their respective teams. Two of them—Kurt Rambis and Kareem Abdul-Jabbar—were teammates on the Lakers for seven seasons and won five titles together.

There are two things I will never forget about former NBA journeyman Kurt Rambis: the shot he took from Kevin McHale in the 1984 NBA Finals and his signature black-rimmed specs.

First, let’s talk about that fateful clothesline that Rambis suffered at the hands of McHale.

The Boston Celtics and Los Angeles Lakers were heated rivals, facing off against each other in the NBA Finals three times in four years. The first came in 1984 and led to the infamous McHale clothesline I mentioned earlier. The most impressive feat of the clothesline comes from the glasses Rambis wore. How did they not fall off after that shot he took?!

For Rambis, whose vision is a whopping 20/400, wearing glasses was his only option. The specs, along with his tough, blue-collar approach to the game, made him a fan favorite. Chick Hearn, the Hall-of-Fame Lakers play-by-play announcer, anointed him with the nickname “Superman” because of his Clark Kent-esque look on the court.

After his playing career, Rambis got into coaching and was the head coach for the Lakers, Timberwolves, and Knicks.

As a big Chicago Bulls fan, many of my early basketball memories involve Horace Grant’s notorious goggles. Grant played a huge part in the Bulls’ first three-peat as their enforcer, rebounder, and goggle-wearer extraordinaire.

Grant got them in 1991 and wore them religiously because he was legally blind. It’s staggering to think that Grant—without eyewear—was named ACC Player Of The Year at Clemson during his senior year.

In 1996, Grant got LASIK surgery to improve his vision. While he gained his sight, he never lost the goggles. Why? Because of the impact they made with young fans who wore glasses. He said he lost count of how many parents and grandparents thanked him for making children more comfortable wearing goggles when they played.

Horace Grant made goggles cool for a time in the ’90s. For that, he won over thousands of fans. He probably indirectly improved many kids’ games, too, as they could see on the court rather than sacrifice their sight to look cooler.

Kareem Adul-Jabbar started his career in Milwaukee, winning a title with the Bucks during his time there. He was then traded to the Lakers in 1975 and spent the next fifteen seasons in LA before retiring. Jabbar played an integral part of the “Showtime” Lakers’ 1980s dynasty and became a mentor to the entire league as his star rose.

During a time when players didn’t prioritize diet, flexibility, and weight training, Jabbar beat the odds, playing 20 seasons in the league. He is the NBA’s leader in total points, with over 38,000 scored, and still leads the NBA for total minutes played in his career with over 57,000.

Kareem’s journey to goggles was a little different than Rambis’s and Grant’s. Jabbar began wearing goggles in 1975 after getting a fingernail to his eye during a preseason game. While it had nothing to do with his vision initially, the number of times it happened led to a corneal erosion diagnosis. As a result, he developed corneal erosion syndrome. The condition would dry his eyes up, causing pain at times. In fact, he actually missed time during the 1986 season because of it.

While Jabar was never known for his charm and sense of humor while playing, he did poke fun at his famous goggles in the movie Airplane!. Jabbar played a pilot in the movie. During a scene where he was supposedly sick because of a meal he ate, he was carried through the plane wearing his full uniform and goggles instead of his pilot’s uniform.

Vision impairment is common; it doesn’t discriminate, no matter how talented or skilled you are. Kurt Rambis, Horace Grant, and Kareem Abdul-Jabbar are just a few players in the history of the game who donned goggles while playing. Their signature looks resonate with all types of fans because of the distinction of their eyewear on the court.

These talents thrived at the highest level despite their vision impairment. They made wearing goggles cool to the younger generation of players. Goggles or athletic eyewear is nothing new on the court, and the pros far outweigh the cons if you are the one wearing it.

Did you have a favorite player who wore glasses or goggles on the court? Let us know who it is below in the comments section!