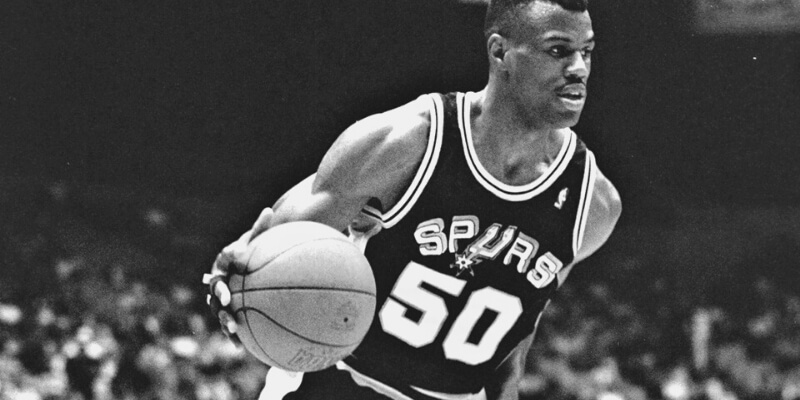 There are many impressive achievements in the game of basketball. Winning a championship ring is one of the biggest, as is taking home MVP or getting a scoring title. However, one of the rarest feats any player can hit is the elusive quadruple double.

I am a long-time basketball player who has been watching basketball for nearly three decades. I know the game inside and out, especially when it comes to the NBA. I’ve seen many impressive things happen over my lifetime, and I understand the game as a whole.

Here, I will go over the history of the quadruple double in the NBA. That includes what it is, the times it’s happened, as well as why it’s such an incredibly rare occurrence.

Check out the below sections to learn more!

What is a Quadruple Double?

While there are many difficult achievements in basketball, the quadruple double is undoubtedly one of the hardest. That may come as a surprise to some, but it’s much more difficult than even getting an MVP. In fact, it’s only happened five times in history.

For reference, a quadruple double occurs when a player gets double digit totals (10 or more) in four major stat categories. That can be either points, rebounds, assists, steals, or blocks.

While triple doubles, getting 10 or more in three categories, happens many, many times each year, getting ten in the last category is almost impossible. That’s why only four players have ever achieved the feat.

Below, we’ll break down who those players were, when they got a quadruple double, as well as what happened in the game that enabled them to succeed where so many other players had failed.

As mentioned, a quadruple double is hard. Really, really hard. However, on a chilly October day in 1974, the great Nate Thurmond was ready to do the impossible. In a game against the Atlanta Hawks, he put up the first one in NBA history with an incredible performance.

Netting 22 points, 14 rebounds, 13 assists, and 12 blocks, he took down the Atlanta Hawks almost entirely by himself. That statline wasn’t just the first time a quadruple double had ever happened, it was a momentous achievement in history that would not be repeated for 12 years.

Thurmond’s stateline that night was excellent, and it was just one part of his hall of fame career. He would go onto be a part of seven all-star games and average a stunning 15 points and 15 rebounds a game for his time in the league.

Even so, nothing was as special as his performance in 1974.

As quadruple doubles are so rare, many people associate them with all-time greats. While that’s not unfounded, there are exceptions to that rule. One exception to be exact: Alvin Robertson.

While the other quadruple doubles in NBA history were done by hall of famers or future all-time greats, the one on February 18th, 1986 was done by a player with a long, but largely forgettable, career.

Against the Suns, Robertston put up 20 points, 10 steals, 10 assists, and 11 rebounds. That was a testament to his role as a multi-dimensional player and showed his slew of abilities. He was on fire that night, getting the only quadruple double in history with steals rather than blocks.

Beyond that, Robertson led the NBA in steals three different times and notched the Defensive Player of the Year award in 1986. He didn’t do too much beyond that, but he managed to stay in the league for an impressive twelve seasons.

While his time in the league is largely forgotten by most sports fans, his name will forever be etched into history by his largely unmatched performance during the 86 season.

Unlike Robertson, Hakeem “The Dream” Olajuwon is one of the most recognizable names in NBA history. As such, it makes perfect sense that he has, not one, but two quadruple doubles under his belt. Not only that, but both came within a few weeks of each other.

The first occurred on March 3rd, 1990. At the time, Hakeem was making a name for himself in a big, big way. Going up against the Warriors, he put up 29 points, 18 rebounds, 10 assists, and 11 blocks on his way to one of the most dominating performances in league history.

And that was just the beginning. The center followed up his impressive performance with 18 points, 16 rebounds, 10 assists, and 11 blocks against the Bucks a few weeks later on March 29th.

The last quadruple double in NBA history occurred on February 17th, 1994 when David “The Admiral” Robinson put up 34 points, 10 rebounds, 10 assists, and 10 blocks against the Pistons in Detroit.

That performance wasn’t just good, it was the only quadruple double where the player scored more than 30 points. All of the other stats were just at 10, but that was more than enough to put the future hall of famer onto the list and etch his name into the history books.

It’s incredible to think that there have been only five quadruple doubles in NBA history. Even more so to realize only four players hold the title. Each game was truly special, and rightfully deserves a place in history.

Even with all of the talent that’s been in the league since 1994, including some of the best players and dynasties of all time, nobody has gotten close in the last 27 years. Somebody might one day, but with the rise of the three pointer, it’s looking less and less likely each year.