How Much Do NBA Refs Make? 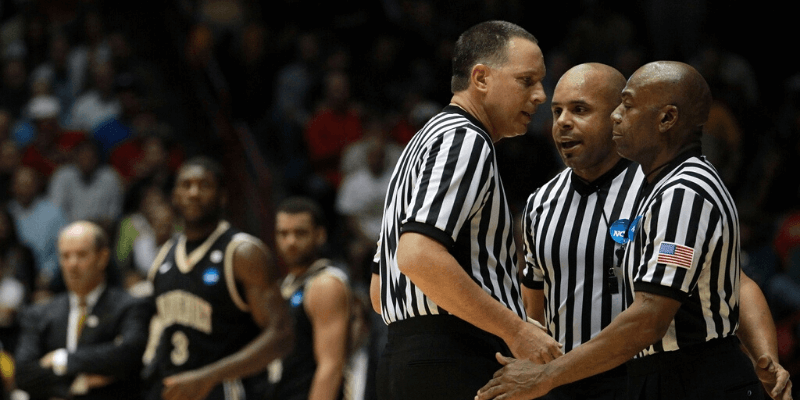 We all know that basketball players in the NBA make a ton of money. The superstars make tens of millions a year and even the lesser known bench players are millionaires after one season in the league. These athletes draw huge crowds and are so good at the game that their salaries are well earned and well deserved.

But what about the refs? How much do they make to keep the games in order and call all of the fouls and penalties? You would think they earn a pretty decent salary, being referees at the highest level of basketball, but it’s a good question if you’re curious about the inner-workings of the NBA.

Why Refs Are Important

I’m sure at some point, you’ve complained about a whistle or a bad call that a ref made against your favorite team or favorite player. I’ve hollered at the TV or at a ref on multiple occasions when a call didn’t go my way and it’s part of the game if you’re a fan and watch a lot of basketball.

But referees are a very important aspect of any professional sport and the NBA is no different. Without good refs, it would be impossible to enforce the rules and regulations that make high-level basketball such an awesome sport. It would be chaos on the court if players or coaches tried to enforce the rules and referees provide a level of discipline and control that is needed to make the game function.

NBA refs are the best of the best and usually get the job after years of experience in lesser leagues such as college or overseas. Only really good refs make it to the NBA and it’s important to have great talent enforcing the rules for the great talent on the court.

Becoming an NBA ref is not an easy job and it’s not an easy job to get. Most refs who make it to the top have years of experience in other leagues and have dedicated much of their lives to understanding the ins and outs of the game. A ref needs to know all of the rules and regulations by heart and be able to make the correct call in an instant.

Refs also need to be in great physical condition because they spend the entire time on the court running back and forth. They may not be working as hard as the players, but there are no substitutions for refs and they need to maintain their focus and energy while running the court. It is a high pressure and strenuous job that doesn’t have much room for error. A bad ref won’t last long in the NBA, so they always have to be on top of their game.

In addition to years of experience and good physical conditioning, refs also need to be able to deal with conflict and handle tremendous amounts of stress. Could you imagine telling Lebron James what to do?! Or having the courage to kick Coach Popavich out of a game?! Conflicts will arise during the course of the game and refs need to act quickly to maintain order and sometimes this means getting tough with some of the games best.

There is a pretty big difference in pay between starting level referees and those who have senior level experience. Entry-level refs make about $150,000 a year while those with experience can make up to $550,000.

It typically takes about 3-5 years for refs to start earning the higher amounts but that entry-level salary is not bad for the average person. Salaries can fall anywhere within this range depending on the ref and how long they have been in the NBA.

In addition to the yearly salary NBA refs make, they also get extra pay if they are chosen to be a ref in the playoffs. The NBA playoffs are so important that the league only selects the best refs to officiate these games. And as the playoffs progress towards the finals, the pool of referees gets even smaller. The more playoff games a ref works, the more they can earn on top of their base salary.

Refs also get a bunch of benefits similar to other corporate jobs. They have good health insurance, retirement packages, and get raises which add even more incentive to an already cool job. Plus, they get to watch NBA basketball every day at work!

It is not easy to become an NBA referee. You could spend years upon years in smaller leagues and still never get a chance to work in the top basketball league around. Those who do make it to the top are pretty well compensated for their skills and hard work it took to get there. Refs have an important job that is a crucial aspect to the game and I think they deserve to get paid pretty well because of it.

The job doesn’t come without hard work and sacrifice, just like a lot of other high paying opportunities. Refs spend months out of the year traveling from game to game and are away from their families. They never get the fame on the level the players do, but at least they get a little piece of the fortune.

Do you think NBA refs deserve more or less pay?