NBA 3-point Line: Everything You Need to Know 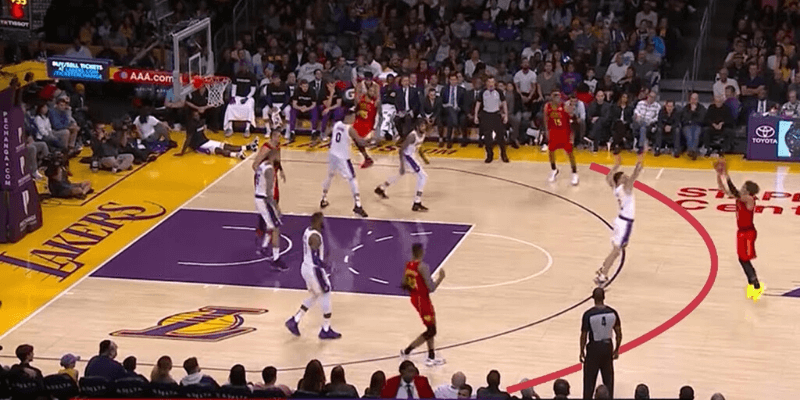 There are many NBA legends about sharp-shooters that shot the light out across the league, in their wake a trail of daggers and championships. The shooters deadliest weapon, a three-pointer.

Also referred to as the “arc” or as some broadcasters call it, “down town” or the “perimeter.” The 3-point line is a key feature on the basketball court. Dynasties and careers have been built upon this line.

With such a great impact on the game of basketball, whether you are a player or fan, you can know a lot about the game by taking a look at the 3 point line.

What is the Purpose of the 3-point Line?

Like the name implies the 3-point line is the basis of how much a field goal is worth. Field goals are worth either 2-points or 3-points, if the shooter is beyond the 3-point line, their shot is worth 3-points. Fairly simple if you ask me.

In the official NBA rule book, Rule No.5 SCORING AND TIMING, section I SCORING, article 3 states:

c. A successful field goal attempt from the area outside the three-point field goal line shall count three points.

During free throws, the three-point line serves the purpose of dividing players. The team taking the free throw will have 3 players within the 3-point line, one being the shooter, the other 2 are lined up along the block and will attempt to rebound the free-throw if it is missed. The opposing team, not taking the free throw, will have 4 players along the block attempting to rebound a missed free-throw. The other players must stand outside of the 3-point line.

When Was the 3-point Line Added to the NBA?

The 3-point line was first added to the NBA during the 1979-1980 season. The first season of the NBA was in 1946, meaning that there were 33 years of NBA basketball without the three-point line. You will sometimes hear broadcasters say, “post 3-point era,” when referring to stats. Since certain scoring stats changed with the introduction of the 3-point line, broadcasters make a point to differentiate the scoring eras.

By 1976 the NBA and ABA would merge, as stated above, the 3-point line would be re-introduced three years later during the 1979-1980 season.

For more history on the 3-point check out this article by USA Basketball on the history of the 3-pointer by Ryan Wood.

How Far is the NBA 3-point Line?

At a maximum distance, the NBA 3-point line is 23 feet 9 inches from the basket. Its minimum distance from the basket to the nearest sideline, on each side, is 22 feet. This 22-foot shot is referred to by most as the “corner three,” and is also the closest point a shooter can take for a three-pointer.

While other leagues around the world have varying distances of their three-point line, the NBA line is at least a foot further than the next closest line. The NBA development is also known as the G-League has a line similar to the NBA, while FIBA and the WNBA have a similar line that is 22 feet and 2 inches at its maximum distance.

What is the Shape of the NBA 3-point Line?

Basketball would not be the same without the 3-point line. The amazing feats of clutch shooters and buzzer-beaters have rocked stadiums and living room couches. Every play-book at all levels of ball is influenced by the arch and its legacy.

To quote 8-time NBA champion (by way of player and coach) Stever Kerr,

The 3-point line and the range players are showing with their 3-point shooting, it’s changing the way defenses have to think.

The future of the 3-point line looks just as epic as its past. As a player, coach, or fan you should be knowledgeable in its ways to fully grasp the beauty of the game of basketball.

If an offensive player dribbles the ball in a fast break, and attempts a layup, where his final step before leaping into his layup is from behind the 3 point line and the player makes the basket, and lands well within the 3 point line. Is this shot considered 2 points or 3 points?