Why NCAA Once Banned Slam Dunk? 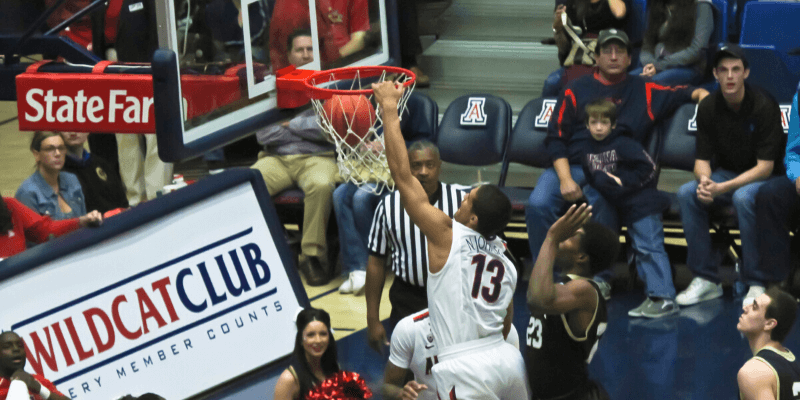 Watching basketball can be very exciting. The players are so athletic and some of the moves they make are amazing. Crossovers, no-look passes, 3-point shots, off-balance shots in traffics and of course, dunks. These spectacular moves are a big part of why basketball is one of the fastest-growing global sports today.

The NCAA is one of the places that we go to watch young, up and coming talent and there are many ways in which the college game is different from the pro game. And while the best of the best usually only stay in the league for one year, it is still fun to watch and see what they can do against the rest of college basketball’s finest talent.

There was a time when the top-notch players would stay in the league for 3 or 4 years and we would get to watch them grow from youngsters into the college game’s greats over a number of seasons. Along with the great competition and team chemistry this would create, it also provided a very exciting product and made NCAA basketball a must-watch event.

With all of the young talent and athleticism that attracted fans to watch the college game, you may be surprised to find out that the NCAA once banned one of the most electrifying moves in the game. What move was that? Believe it or not, the “Dunk” was once illegal in college basketball.

You might ask the question, “why in the world would the NCAA ban such an awesome move?” To answer this, let’s take a look at the ins and outs of the ban.

As basketball evolved through the mid-1900s, the players evolved along with it becoming more athletic and more innovative with their moves. It soon became apparent that taller players had the advantage of being closer to the rim and could throw the ball down into the basket or dunk.

Many of the old school coaches and basketball experts did not like the dunk. They felt that it required no skill and made scoring “cheap”. At that time game scores were usually low and many felt that scoring less frequently made the game more exciting because it was so exciting when someone finally did score.

The new wave of taller and athletes began to score easily and some like Wilt Chamberlin and Bill Russel were virtually unstoppable. It could be that some of these old school coaches were just frustrated because they had not found a way to defend against these “unstoppable” players.

Even the great Fog Allen, who coached Wilt Chamberlin, continually lobbied to get basketball hoops raised from 10 feet to 12 feet in order to make it more difficult to dunk (Wilt could still dunk easily on a 12-foot rim) and to take away some of the advantages of being tall. While it was strongly considered and even tested, it really never became a viable solution.

So, in 1967, the NCAA actually decided to ban the dunk, claiming that it was not a “skillful shot” and also citing injury concerns. Whether or not it was a skillful shot was highly debatable and the injuries due to dunking were a very small percentage compared to other injuries that occurred while playing basketball. With the new rule in place, any player touching the rim would result in a technical foul.

The “Real” Reasons for the Ban

While the NCAA claimed multiple reasons such as it being a shot that lacked fundamentals, injury concerns and even game delays from backboards and rims being broken, the real reasons (at least in many people’s opinion) were a bit more obvious.

The game had changed and much of the old establishment did not like the new style of play. Another arising problem was that there was a new “unstoppable” force that just started playing at UCLA, named Lew Alcindor (later known as Kareem Abdul-Jabbar). At 7 foot 2 inches tall, with long lanky arms, Alcindor could dunk the ball with little effort and there weren’t many players who could stop him.

While the NCAA denied that Lew had anything to do with the new rule, many had already coined the rule as the “Lew Alcindor Rule”. To keep his team focused on playing and winning basketball games, UCLA’s legendary coach, John Wooden, tried to convince everyone and Lew himself that this was not the case.

Wooden, who was an old school coach himself, was not really for or against the rule. He was the type of coach and leader who was not going to spend time complaining but rather figuring out how to win with the new rule in place. He convinced Lew Alcindor and the rest of the team that the new rule would sharpen their game by forcing them (especially Alcindor) to learn other types of shots and moves.

Effects of the Rule

The new rule did not seem to hinder Lew Alcindor, John Wooden or the future UCLA teams who went on to win 8 NCAA Titles during the ban. Wooden, being the extraordinary coach that he was, used the rule to his advantage. Just as he had told Alcindor, his game was improved by making it more well rounded. Lew became a better midrange shooter, learned to use a finger roll and developed his famous skyhook shot that he used throughout his career.

The ban lasted until the 1976-1977 season and many players throughout this period probably had to adjust their games and find ways to show off their elite athleticism. It is sad to think about the incredible plays and moves that college basketball probably missed out on. Players like David Thompson of N. C. State, who was a dunking machine had to reel back their games and find ways to gently lay the ball into the hoop.

Thompson always felt like it was easier to just dunk the ball rather than have to try and lay it in. The majority of fans also loved to see his explosive dunks and he felt that the ban made the game very frustrating for him. In his final college game, he decided the rule wasn’t going to stop him.

On a breakaway, Thompson took the ball down the court for a powerful slam dunk which got a standing ovation from the crowd. It also got Thompson an immediate technical foul and a quick seat on the bench. It was his last moment on the court as a college player but he was proud of it.

The End of the Ban

The ban ended in 1976 with the NCAA claiming that with so many players playing above the rim it was becoming increasingly hard for referees to judge and make goaltending calls. While this is probably true, they may have also been influenced by the excitement of play that took place in the ABA and seeped into the NBA with the merger between them and the ABA. There was no denying that this style of play in the professional leagues was attracting far more fans.

While the NCAA ban of the dunk may have accomplished some of the things they claimed, such as getting college players to play more fundamental basketball and expanding their abilities, we may have missed out on some great play from a lot of young athletes.

Thankfully the ban was lifted and we were able to see players such as Michael Jordan, James Worthy, Clyde Drexler, and countless others show off their ability to lift entire crowds to their feet with their incredible slam dunks.

What do you think about raising the basket to 12 feet high? Would we see fewer dunks or would it make them even more spectacular? We’d love to hear from you, so please leave your comments if.