How Tall is Nikola Jokic? 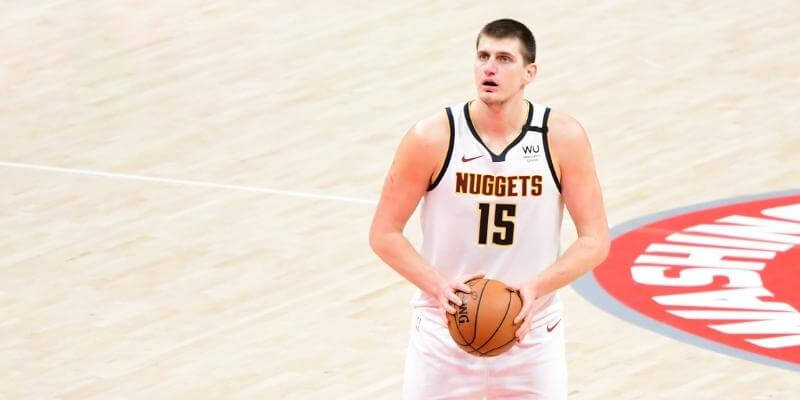 The NBA is a big sport for big men. While there are smaller positions, just about every player towers high over the average citizen. Given that, it should come as no surprise that the biggest players on the court (forwards and centers) are both truly impressive specimens.

The following sections take a look at Nikola Jokic’s height, and explain why it doesn’t matter that much, though his extra size helps him during games.

That analysis will also shed light on the league as a whole and give further insight into the way height has changed for centers as the years have gone on.

There are many vertically-gifted players throughout the league, but even by their standards, Jokic is quite tall.

The Serbian-born center stands an impressive 6’11, which shouldn’t be a surprise as he’s a starting NBA center.

All big men have to be up near the rim, and centers are the largest of the bunch. While some can top 7 feet, most are right around (or just below) that mark.

That puts Jokic, while impressive when up against the average person, right in the middle of the pack in terms of the NBA.

How He Stacks Up

As the reigning MVP, there’s no doubt that Jokic has the skills to win games. He’s an ever-present threat that teams need to constantly worry about scoring.

He can also pass like nobody’s business. However, he’s not that tall compared to the rest of the league.

Currently, the average NBA center stands 6’10. That puts Joker one inch above the middle line.

Even if he isn’t quite as imposing as other superstars like Joel Embiid or Rudy Gobert, he’s learned to play much larger than his size. That’s a big reason for his success.

The NBA as a whole has dipped in size over the years, and Jokic is another example of that trend. Centers reached their peak average height all the way back in 1996.

While that did stabilize, the emphasis on faster, quicker basketball caused them to become shorter and faster.

Still, most of the top centers remain on the higher end of the spectrum. They just do it without losing any speed.

That’s why Jokic is such a great example of the modern NBA. He’s a larger man who’s an excellent passer, a deep threat, as well as someone who can run the floor.

When talking about Jokic’s height, it’s also important to mention his weight. He clocks in at 284 pounds, which is partly what makes him so special. He’s got a lot of size, and he knows how to use it.

The average weight for an NBA center is around 250 pounds. That heft is impressive, but Jokic pushes past it by more than 30.

Being able to use his frame to get in down low or bully opponents trying to get past him are what makes him so special.

It’s not just that he’s tall or that he’s big. It’s that he manages to be both in a league where spread offenses and three shooting takes center stage. Being tall is valuable, but only if a player is also quick.

Few big men are able to stand up to Nikola Jokic. He’s an incredibly impressive player who has high basketball IQ and has done a great job of adapting to the league. Where most players his size rely solely on their strength, he’s found a way to become a true triple threat.

There’s no telling what he might do in the coming years, but as centers focus on shooting, speed, and quickness, it certainly shows he’s already broken new ground.

For The Joker, the sky is truly the limit.