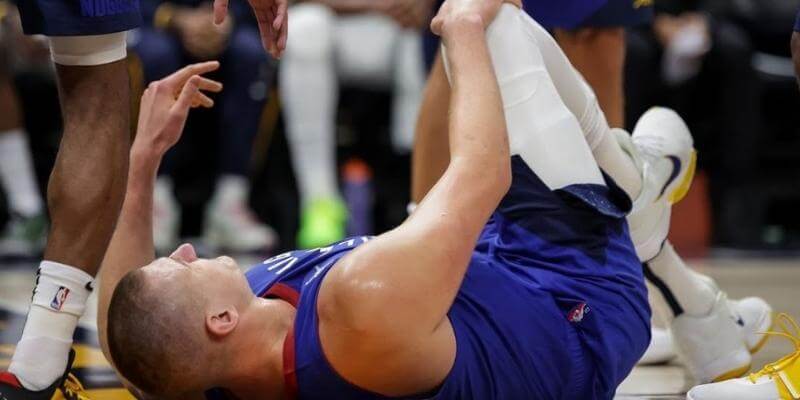 Like it or not, injuries are a part of sports. Even the greatest players get hurt from time to time, and some of the worst ailments can completely derail careers. It’s all about mitigating injuries, knowing how to handle them, and understanding when to rest.

This guide fully discusses the injuries Nikola Jokic has sustained during his time in the NBA.

He’s not a player who’s known for getting hurt, but he’s not immune either. He’s had a couple problems, and they’ll all be covered in detail below.

Jokic is a large player. While he’s a phenomenal passer who does a lot of work outside of the paint, that means he’s used to bumping his body against other big men. No matter how strong someone is, that grinding each and every night will eventually take a toll.

Such abuse is why Jokic has missed a few games since he came into the league. However, as far as injuries go, he’s managed to stay healthy.

Nikola Jokic is the most durable All-Star in the NBA.
The last game he missed because of injury was on December 2, 2017 against the Lakers.
This is not talked about enough pic.twitter.com/JxNIZtxXd1

Unlike so many other big men, he’s never missed an extended amount of games or been sidelined for most of a season.

That in and of itself is worth a lot in the NBA. Staying healthy is not a skill that players have control over, but being able to stay on the court and start game after game goes a long way. It’s especially important for superstars who want to make deep playoff runs.

Jokic has been in the league since 2015. In that time, he’s accrued 11 official injuries that aren’t just missing a game here and there from soreness or rest.

Those two ailments were the only injuries he got in his first five years in the league, which was incredibly impressive given how much he played.

Even so, his 2021 campaign was a bit of a different story. There, it seemed that playing as much as he did finally caught up to him.

In the 2021 season, Jokic suffered a slew of injuries to different parts of his body. He officially suffered one thumb injury, one ankle, wrist, and forearm injury, three toe injuries, and two to his knee. Of those, his toe gave him the most trouble and is something he still deals with.

Even with all of those issues, he only missed a total of six games throughout the season. That’s not a lot of time, but it’s significant considering he only got injured twice before 2020.

Hopefully, it’s not a trend the Nuggets have to worry about going forward.

Something to note about The Joker is that he doesn’t miss a lot of time due to rest. Many of today’s superstars will sit out a game here and there to get a breather and mitigate their workload. Not Jokic. In fact, the center has years where he started in every single game.

In the current 2021-2022 season, Jokic has played in more than 70 games every season he’s been in the league. That wouldn’t have been remarkable a few years ago, but it’s incredibly impressive where other big men like Joe Embiid and Rudy Gobert have multiple seasons where they played less than 60.

Jokic has missed more games as of late, but it’s always better to be safe than sorry. Pushing through an injury will often lead to further issues down the line, which is something the Nuggets need to avoid at all costs. That’s a lesson The Joker seems to have learned as well.

DeMarcus Cousins, Nikola Jokić and Aaron Gordon are OUT tonight.

As mentioned, being able to avoid injury is a big factor in how well someone can play over time and how well they can build their legacy. Getting healthy for playoff runs is more important than winning regular season contests.

If the Nuggets want to win it all, or if they want to continue to make deep pushes, they’ll need Jokic to stay one step ahead of his injuries. That often means sitting out when he’s not feeling 100 percent.

Jokic is one of the sturdiest centers in the league. While he doesn’t always play like it, the Serbian superstar has a lot of power packed into his 6’11 frame. That, combined with the fact that he’s more of a passer than a big bruiser, is why he’s managed to stay relatively healthy.

The reigning MVP is one of the most productive players in the league. He completely resurrected the Nuggets franchise and continues to play at an extremely high level. As long as he stays healthy, that’s unlikely to change no matter how big his workload gets.