What Shoes Does Nikola Jokic Wear? 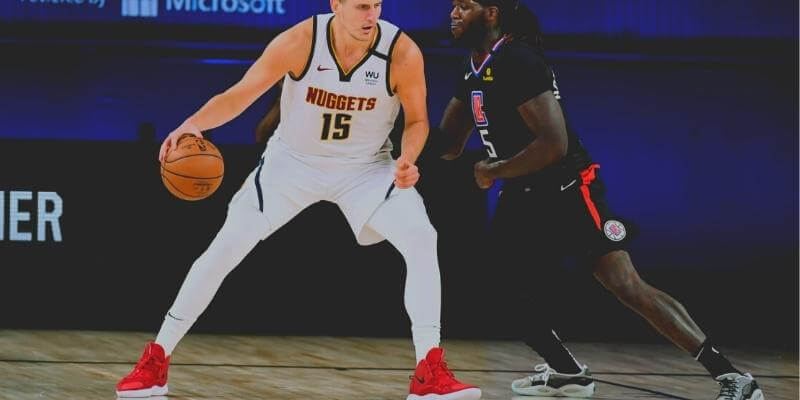 Shoes are one of the most important parts of any NBA player’s career. Not only do they need proper footwear to help them out on the court each and every night, but brand deals can also take them to the next level. At the top, a good sneaker can go a long, long way.

The following sections look at the different shoes Nikola Jokic wears and has worn, throughout his years in the league.

That will give a unique look into his play style, as well as provide some ideas for shoes you may want to wear in your own life.

Before delving into specifics, it’s important to study why Jokic wears the shoes that he does. As with most superstars, he’s signed to a brand.

Unsurprisingly, given his massive accolades and general appeal, that brand is Nike.

While the specifics of the deal are cloudy, and no exact dollar amounts are known, it’s safe to say his initial signing with the industry giant came alongside a hefty sum near or exceeding a million dollars.

However, unlike many athletes, he has no signature shoe of his own.

That’s interesting because it directly affects what he wears each night on the court. Many athletes choose to rock their own models, or at least show them off when they first come out.

As Jokic doesn’t have one, he just rolls with Nike as a whole.

Even before his deal, Jokic loved rocking the swoosh. He wore numerous sneakers throughout his early years in the league, and often chose ones with flashy colors. He also has a preference for larger sneakers that enable him to plant effectively while moving around the court.

As his time in the league progressed, that trend continued. The big man preferred the Nike Air Zoom G.T. Jump, as well as Zoom Rize, and Hyperdunk Silhouettes.

He was a big fan of the entire Hyperdunk line, and wore them until Nike eventually discontinued the shoes in 2019.

Once the deal went through, The Joker continued with Nike. He now goes with different models depending on his mood. He strongly favored the Zoom Rize 2 in the 2020-2021 season due to the durable construction and grippy sole.

This year he also featured the Rize, the Nike G.T. Jump, as well as Zoom. All three models have helped him on the court, so it doesn’t seem that he’s planning to switch anytime soon.

Every player chooses shoes for different reasons. Beyond the contract, Jokic wears Nike models due to their durability and sturdiness.

Unlike many slimmer styles, the ones he wears have a strong focus on power. They come with a lot of grip and enable him to plant.

That sturdiness at his feet is a big reason Jokic is able to play as big as he does. He doesn’t get pushed around easily, nor does he get kept out of the paint. He’s a larger player, and the shoes he puts on reflect the way he likes to play.

For some athletes, shoes are everything. While Jokic is not someone who puts a ton of stock into his footwear, what he chooses matters a great deal for his style of play. Going with something strong and powerful is always better than light and breathable.

While the big man has no shoe deal yet, his recent MVP season shows that he has the potential to get one. He has to wait until his current contract is up in order to get his own sneaker, but the way things are going there’s little doubt that day will come.