Nikola Jokic vs Joel Embiid: Who is Better? 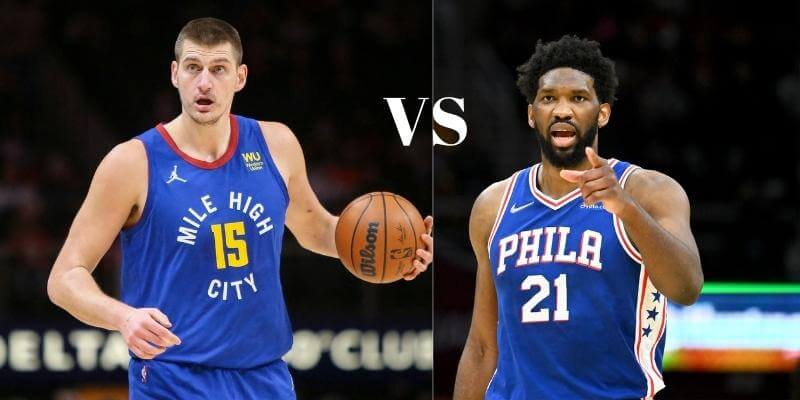 Basketball as a sport has greatly changed over the past few years. What was once an easily defined game between big men, outside players, and guards, has become much more blurred. Centers and forwards can shoot like never before, and they are able to move quickly as well.

There are many big men who reflect that trend, but no two players better exemplify the shift than Nikola Jokic and Joel Embiid.

Here, I’ll break down who is better.

Comparing two players is always tricky. That’s because, no matter how well they play on paper, that’s never the whole story. Different players affect their teams in different ways. For instance, someone who scores a lot may not be as important as someone who passes well.

It’s all about how individual players work within their larger system. Embiid is a fantastic scorer and great defender, while Jokic is a much stronger passer. Such details are important, and must be taken into account when looking at the raw data of their stats and numbers.

That being said, I believe Nikola Jokic is a better overall player due to a combination of stats, basketball IQ, and general power. I’ll explain those ideas in further detail throughout the following sections.

A Look at the Stats

The first aspect to discuss when comparing Jokic and Embiid is their stats. Both superstars do extremely well on the stat sheet, and they’ve been getting better and better each season. They are the lifeblood of the offense, and they can score in numerous ways.

Looking at those numbers, Embiid has a recent edge in both points and blocks. However, he loses to Jokic in just about every category. The Nuggets center averages more points for his career, as well as more rebounds, assists, and steals. It’s only blocks where he comes up short.

What’s in a Pass?

The biggest discrepancy between Embiid and Jokic comes in the passing. Embiid is a great scorer, with his peak of 30 being more than Jokic ever hit. His top averages for rebounds and blocks are impressive as well. Even so, the Cameroonian isn’t on the same assist level as Jokic.

The Joker is known for his passing, which causes him to be responsible for more points than Embiid. He touches the ball on most offensive possessions, which is something you don’t see much from a center in today’s league.

Not only that, but Jokic’s excellent basketball IQ opens up scoring for other players and makes everyone on the team that much better. It’s not that Embiid doesn’t improve his teammates, he just doesn’t do it as well.

The Sixers offense runs through Embiid, but in a much more static way than the way the Nuggets run through Jokic. The ability to pass and score with lethal efficiency gives Jokic the stat edge, especially when all of the other categories are so close together.

The Subject of Health

Something else to note when comparing these two centers is that Embiid gets injured a lot more than Jokic. That may seem like a side note, especially because ailments are so often out of a player’s control, but it matters when it comes to arguing who’s better.

One could say that Jokic only puts up more impressive stats because he gets injured less. That’s true, but his ability to stay relatively healthy also means he’s able to get out on the floor more and do more for his team. That in and of itself is worth something.

The 2021-22 season is one of the first where Embiid was able to really stay healthy the entire time. His stats were incredibly impressive, especially his scoring, but that’s just a single season. Jokic has simply been doing it for longer.

At the end of the day, better is a relative term. While this article makes the case for Jokic, both he and Embiid are fantastic players who have completely revitalized their teams. That’s why debating who is better is such a tough challenge.

Currently, I give Jokic the edge in the debate. That could change soon, however, if Embiid keeps up his stellar play and stays healthy. Winning a championship (or even getting there) would also tip the scales. Whoever climbs that mountain first is undoubtedly worth a little bit more.