What Are the Odds of Making it to the NBA? 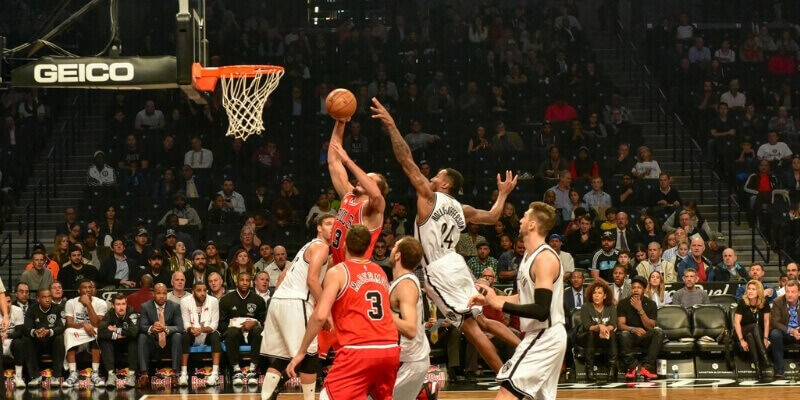 Everyone, basketball fan or not, knows that getting to the NBA is tough. Really, really tough. However, few people know just how hard of a task it can be. You don’t just have to be good to get all the way to the top, you need to be on an entirely different level.

I have spent just about all of my life studying, watching, and playing basketball. My own experience, alongside ample research and the checking of multiple sources, is what enabled me to study and discover the different topics covered below.

In this article, I will go over the trials and tribulations players face when getting to the league. I’ll look at raw numbers, as well as individual odds and external factors, to show why making it is one of the most difficult things to do on planet Earth.

Just How Hard is It?

Before going over why it’s so hard to get to the NBA, we first need to take a look at the raw data. In terms of numbers, anyone pursuing a basketball career has roughly a 1 in 3333 percent chance (.03%) of getting all the way to the top of the mountain.

That may not sound too difficult, but it gets much, much tougher once you break down the research behind those numbers. First, you need to look at the people who are eligible to make the NBA. That means all boys playing basketball at a high school level or higher.

There are roughly 500,000 high school boys basketball players in America at any one given time. Of those, roughly 16,000 will go on to play at a college level. That includes Division 1, 2, or 3. Of that number, only 110 will ever play in at least one NBA game.

That funnel happens quickly and the drop-off from high school to the NBA is extremely sharp. So, while the odds may not seem too crazy at first glance, being one of those 110 is more difficult than most people could ever imagine. Especially when you add in foreign players.

How Good Do You Have to Be?

Simply put, most high-level players know they’re going to succeed early on. That’s not always the case, with some players blossoming in college, but for the most part, those that have special talent learn they’re special early in high school or even late middle school.

With a few exceptions, those that make it to the NBA have to dominate at other levels. Most easily score 20 or more points a game on varsity, or they have a comparable advantage in another relevant stat. On top of that, they are typically nationally ranked in some way.

Even NBA players that surprise scouts and break out later on in college were highly recruited at some point. In fact only two D3 players have ever made the NBA, and very few undrafted players make the push. Those that do have unprecedented athleticism and talent.

Even if you have a lot of talent or amazing work ethic, that’s not enough to make it to the league. You also need to get lucky in terms of genetics. All of the talent in the world won’t matter if you don’t have the quickness, height, or speed you need to keep up with the pros.

The largest factor is undoubtedly height, but weight is important too. The average NBA player stands 6 feet 7 inches tall and weighs 220 pounds. Those are large men playing what is realistically a large man’s game. However, you don’t need to be that big.

There are plenty of guards and wings who have found success in the league despite being on the smaller side. In order to make up for the height difference, they had excellent quickness, could jump extremely high, and were able to shoot lights out.

The truth of the matter is, everyone in the NBA is a genetic freak in some way. Even smaller guys like Isiah Thomas and Nate Robinson were able to bring something completely unique to the court that nobody else on Earth could match.

You need to bring something else completely special to the table. For someone like Jason Kidd it was his passing ability and basketball IQ. For Robinson, it was his ability to dunk.

There are only 400 or so players in the NBA. Even if you do have great stats in high school, you need something else that sets you apart from the 16,000 other college players who all share the same dream. That’s what makes getting to the league so incredibly tough.

Here are some related questions to the topic, I’ll answer them briefly.

How Many People Make the NBA Each Year?

Every year, 60 players (two for each team) are picked in the draft. A relatively low number compared to the total number of eligible players.

How Many Undrafted Players are in the NBA?

Last season 136 different undrafted players appeared in at least one NBA game. That’s not a lot, but there has never been a better time to try to break into the league in a different way.

Can You Get to the NBA from a Junior College?

Yes. While it’s a hard road with a slim chance, there are some great players who started their careers at junior colleges. Jimmy Butler started his collegiate career at Tyler Junior College before moving onto Marquette.

The NBA dream is a real one only for a select few lucky and incredibly gifted individuals. Even some players who have all the right breaks and talent don’t have it pan out for one reason or another. It’s a tough battle that takes a lot of talent, skill, and luck.

Though the numbers don’t seem too bad when looking at them on the surface, getting to be one of the best 400 players on Earth is extremely difficult. Don’t take that as discouragement, however. Take it as motivation to push yourself even more and try even harder.