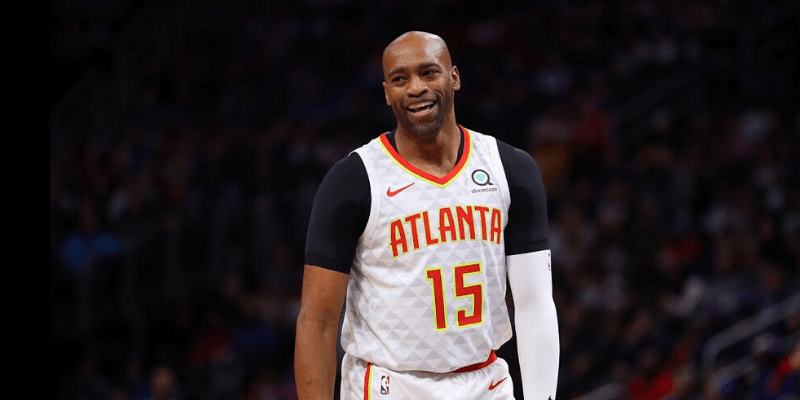 Playing in the NBA requires being in peak physical shape and mental health. The NBA’s grueling 82-game schedule (not including extra games if you make it to the playoffs) can wear your body down as you have to combat long travel and games sometimes on back-to-back nights. While the league schedule is tough enough, that doesn’t even take into account the injuries earned and energy drained from actually having to play in the games!

To say playing professional sports, in general, is a young person’s game is an understatement. But there have been pro athletes in the past, and currently, who have defied the odds and remained in the league for very long periods of time.

So who are the oldest NBA players ever? We will take you on a journey of revisiting some players of yesteryear. You may remember some of these guys and you can even catch one of them, Vince Carter, during Atlanta Hawks games this season.

Before we dive into the historic names on the all-time list, let’s check out the three oldest players, not named Vince Carter, in the league today. While they may not be filling up the stat sheets anymore, many are still playing serviceable minutes on current teams.

Haslem has always been a very serviceable role player on the Heat. He has also been fortunate enough to have played there during the height of the Heat’s most successful years over their 30-year franchise career, winning titles in 2006, 2012, and 2013.

Korver has experienced great success as a sharpshooter for most of his career. He holds the NBA record for highest 3-point field goal percentage ever for one season at .536% and has shot an astounding 43% from three for his entire career, good for 6th on the all-time career three point shooting percentage list.

Nene burst on the scene as a relatively unknown foreign player and played his way into the starting lineup for a very good Denver Nuggets franchise for over a decade. Nene has also seen basketball success on a national level, starring for the Brazilian National Team, where he played in both the 2012 and 2016 Summer Olympics.

The list of oldest NBA players ever is very diverse. The top 10 oldest players ever contain five Hall of Famers and one future inductee (Vince Carter), one of the earliest professional two-sport athletes, and three very well regarded and effective role players.

Let’s discuss these players, shall we?

Nat Hickey was a professional basketball player in several early professional leagues that preceded the NBA. There aren’t a lot of statistics on Hickey’s career but an interesting tidbit was that while he was playing 27 seasons of basketball he also spent 15 years playing minor league baseball.

Hickey’s career setting age record was a bit of his own doing as he activated himself as a player as the coach of the Providence Steamrollers and recorded a couple of games during the 1947-48 season, playing in his last two days before turning forty-six.

Willis was a well-regarded role player that spent most of his prime playing for the Atlanta Hawks. Anyone who saw Kevin Willis play in the ‘80s and ‘90s would be remiss not to notice his physique as he was one of the early adopters of weight training and physical fitness to keep his body ready for the grueling NBA season each year. It is no surprise that he stayed in the league as long as he did.

Robert Parish is most widely known for his successful tenure with the Boston Celtics where he, along with the likes of Larry Bird, Kevin McHale, Bill Walton, and Dennis Johnson, helped lead the Boston Celtics to three titles during the decade of the ‘80s.

Parish was the consensus third-best player on the team and averaged 15 points and 9 rebounds per game for his career. Because of his durability and how well he took care of his body, Parish holds the NBA record for most regular-season games played in NBA history with 1,611 games played and was inducted into the Basketball Hall of Fame in 2003.

Vince Carter came into the NBA back in 1998 with all of the expectations of a player that would break records and dunk on anyone in his way in the process. Carter was known as a high flyer and potent scorer early in his career.

He averaged 23 points per game for the first 12 years of his career and was named to 8 All-Star teams. One of those All-Star weekends, he had all eyes on him as he participated, and won, one of the most jaw-dropping Slam Dunk Contests in 2000 that the fans had ever seen.

Although he hasn’t averaged double-digit scoring for the past 5 seasons, he has still played valuable reserve minutes and taken on a mentorship role to younger players. He is still deadly behind the three-point arc but his legs are definitely not as explosive as they used to be in his prime.

As one of the most imposing big men to ever play, Dikembe Mutombo has instilled fear in anyone he has ever played against. Players would always think twice when deciding to take the ball to the basket is Mutombo was in the game because there was a good chance that he would block their shot into the first row of fans.

Mutombo’s famous “finger wag” was well earned as he currently stands at fourth all-time in blocked shots in NBA history with 3,289 rejections.

The list of oldest players is a great trip down memory lane in the annals of several important eras of NBA history. What’s so rich about this list is the fact that the top 10 didn’t just hold a bunch of bench warmers that snuck by in the league for several decades just because they only played ten to fifteen minutes per game, thus conserving the wear and tear on their bodies.

This list goes to show fans that basketball is a sport where you must take great care of your body to not only be successful but to also play the sport for a long period of time at a high level.

Is there anyone in the league right now, excluding Vince Carter, that you think may end up on this list? Let us know in the comments below!