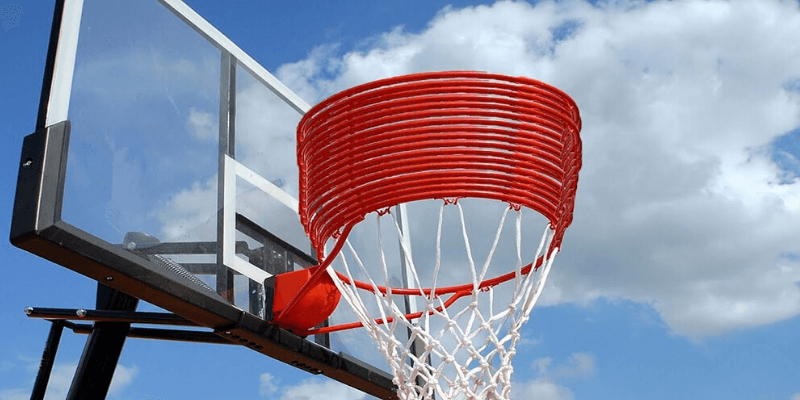 Have you ever seen a double rim on a basketball hoop? What are they for? Is it good to practice or play on a double rim?

Double rims are commonly found on playgrounds and other types of outdoor public courts. The reason that double rims are used is that they are stronger and stand up better to outdoor elements. Their strength also protects the rim from being bent due to extreme play and players hanging on the rims.

As a teenager in Indiana, I remember one of our local elementary school playgrounds having hoops with double rims. We liked to play on them because they were lower 8-foot baskets and we could dunk on them. The double rims were really nice because we could really hang on the rims as much as we wanted and they would not bend or break.

It was a lot of fun to play on these courts with the 8-foot baskets and double rims, but I did notice that it was harder to make shots on them. It seemed like I had to put more of an arc on my shots and I needed a softer touch on my shots to get them to go in.

Why It Is Good to Play Basketball on a Double Rim

Many players may feel that it is demoralizing and really hurts your shooting confidence to play basketball on a double rim. While it can be very frustrating to shoot bricks or take shots that you feel are good, only to catch the rim and bounce out unexpectedly, there are very good benefits to playing with a double rim.

Let’s take a look at how a double rim can help you improve your shot and your basketball game as a whole.

Since a double rim is twice as thick as a regular rim, it has a tendency to catch the ball more often on shots that enter the hoop at less of an angle. This is when you sometimes see the ball appear that it is going to go in the hoop and it then catches the inside of the rim, bounces around and then back out of the hoop. Many times you will hear an announcer say, that the shot was “in and out”. This happens more frequently on double rims.

As a shooter, the solution to this is to put more of an arc on your shot. A higher arc on your shot, makes the ball travel down to the rim at a much higher or steeper angle, giving it a much less chance of catching the inside of the rim and bouncing out.

Good shooters typically have a higher arc on their shot, not only does it give the ball a better chance to go through the hoop, but it is harder to block, generally gives you better form and helps with the next benefit which is shooting touch.

All great shooters have “shooting touch”. Shooting touch is the opposite of shooting a brick. It means that you can put the ball up lightly and gently which gives it a better chance to go through the hoop even if the shot is off by a little bit. If it softly bounces off the rim it is more likely to fall into the hoop then if it hits the rim very hard.

Since a double rim is stiffer than a single rim and has very little give, a shooter must shoot with more touch in order to get most of the shots to go in. Even for a layup on a double rim, a player will learn to toss the ball up gently instead of just throwing the ball up full force.

While it can be very frustrating when a double rim makes it harder for your shots to go down, it will help you adjust and perfect your shooting form by forcing you to put more of an arc on your shot and to have a better touch. If you play a lot on a double rim and then go to play on a normal single rim, it will seem easier to make shots on the single rim because you will have improved your shooting form.

Using a double rim is only one small thing that can help you to become a better shooter. If you don’t have a double rim on your hoop and are interested in getting one, try out the Spalding Super Goal II Double Ring Fixed Basketball Rim.

If you are really interested in improving your shot, there are a lot of other things you can do. Check out this link to USA Basketball for some good tips. This video also has some great tips on improving your shooting form so take a look if you would like to know more.

In my opinion, it can be good to play basketball on a double rim. Although it can be a bit frustrating, it is a really good training method and can be a good way to improve your shooting skills and your form.

By using a double rim you will learn to put more of an arc on your shot and you will start to use a softer touch when shooting. There are many things that you need to be a great shooter and this can be one way to help you work on your form.

Have you ever played on a double rim? What is your opinion of double rims? We’d love to hear from you, so please leave your comments if you would like.