What does PPG Mean in Basketball? 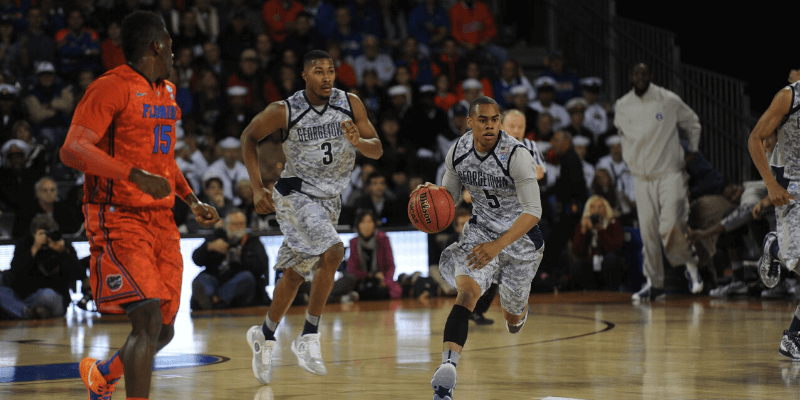 In basketball, stats are everything. They measure the performance of players as they progress through a season and serve as a good indicator of how well teams play.

If you are a huge basketball fan, you most likely keep up with the stats of your favorite players to see how well they are doing throughout the season. While there are several stats to analyze, this article will look at one in particular: PPG.

PPG is the abbreviation for points per game. The NBA has a regular 82 game season. In each game, a player scores X amount of points, which are then added to a general total for the whole year. After all of the games are added together, they are then divided by the number of games a player plays. In other words, points per game is used to determine the average points a player scores throughout the season.

Points per game is typically viewed on an individual level. Some of the league’s best players have high points per game. For example, last season’s scoring champion, Houston Rocket guard James Harden led the league by averaging 36.1 points per game. That stat doesn’t just show his ability but reflects his streak of 30 plus point games as well.

This season, Harden had a streak of 32 straight games where he scored 30 or more points. He started the streak with a 50-point triple-double against the Los Angeles Lakers where he scored 50 points, had 11 assists, and grabbed 10 rebounds. After that, Harden went on a rampage.

Harden had 31 other games with 30 or more points. His streak included games of 47 points, 58 points, and a career-high 61 points in Madison Square Garden. Adding all his averages during that streak and dividing them by 32 gives us the average points her scored during that time (41.1). Such a tear helped contribute to his 36.1 points per game average in the season, which was 5.7 more points than his average in 2017-18.

James Harden had an excellent season and took Houston to the playoffs. His PPG accurately reflects that high-level play.

Why PPG is important?

PPG is important because it helps determine how valuable a player is to his team’s offense. Harden was spectacular last season, which gave him a lot of notoriety with both media and fans. He had several high-scoring games and was in the MVP debate alongside Giannis Antetokounmpo and Paul George.

Though he did not have the spread of stats that the other players did, Harden’s points per game average played a big part in his MVP considerations. He had higher PPG averages than Antetokounmpo and George (who averaged 27.7 points and 28 points respectively), where they had better or similar stats in other categories (assists, rebounds, etc.). So, in this case, his offense (and PPG) benefited him greatly.

PPG is a way to measure a player’s performance throughout the season. It goes along with stats such as assists per game, rebounds per game, and steals per game. In most cases, the league’s best players (LeBron James, James Harden, Kevin Durant, etc.) typically have high PPG each season.

Now that you have a basic understanding of PPG, who are your favorite players, and what was their recent PPG average? Comment below!