How Many Rings Does Ray Allen Have 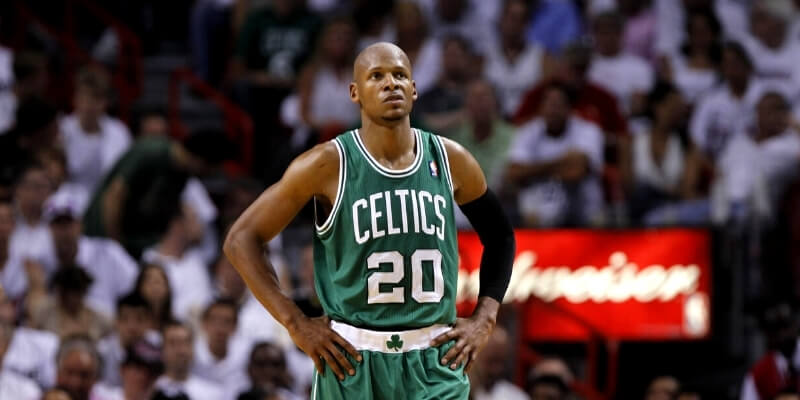 There aren’t too many players who wouldn’t take Ray Allen’s basketball career every day of the week and twice on Sundays. Sure, his individual accolades don’t rival the greats—although he was a 10-time All-Star and 2-time All-NBA—but his career longevity and 2 NBA Championships were exceptional.

Allen was on several great teams during his career. His performance on all of them played a huge part in his teams’ successes. This article will explain Ray Allen’s postseason success, recap some of the titles that got away, and highlight his two title seasons.

Ray Allen has been a well-known player dating back to his college days at UConn. While there, he was a first-team All-American and won Big East Player of the Year honors. He also played in an iconic Big East Championship game against fellow future Hall of Famer Allen Iverson—and hit the game-winner. NBA circles had him pegged for greatness early on.

Allen jumped around the league a bit during his tenure. He was drafted by the T-Wolves and then immediately traded to the Bucks on draft night. He spent seven successful seasons in Milwaukee, with three All-Star appearances and a third-team All-NBA nod in 2001. He even brought the Bucks to the Eastern Conference Finals in 2001.

After Milwaukee, he spent five seasons with the Supersonics, tallying another four All-Star nods and a second-team All-NBA in 2005. He shined in their up-tempo offensive style and had some of his best scoring years in Seattle. He was an automatic 24 points per game with the Sonics, though they never reached the heights they had hoped.

The Celtics were ecstatic to add Allen to their rebuilding project just before the 2007-08 season. Alongside Paul Pierce and Kevin Garnett, Allen thrived as a sharpshooter; the Celts were in the title hunt each of his five seasons.

He spurned Boston in 2012 to sign with the LeBron-led Miami Heat. Allen was a pivotal member of that team and helped the Heat hoist one ring in three years before retiring in 2014.

Ray Allen: Titles That Got Away

We’ll cover Ray Allen’s victories shortly. But there were a couple of years that he was close to winning a ring. The 2010 and 2014 seasons could have lifted Allen’s title count to four, but destiny wasn’t on his side.

In 2010, the Celtics were looking to bounce back from an injury-plagued 2009 season. Their record slipped a bit, and they ended up finishing 4th in the East. This didn’t stop them from rallying and making the Finals as underdogs.

Allen’s playoffs were up and down. He either scored single-digit points or exploded for twenty-five. Game 2 of the Finals was a historic night for Allen as he drained 8 three-pointers and set the single-game playoff record for threes made. The series was hard-fought. Boston actually had a 3-2 lead going into Game 6 in LA. They would be blown out in that game, then lose Game 7 in heartbreaking fashion.

The Heat were on top of the world heading into the 2013-14 season. The team had just won back-to-back titles and were poised for a three-peat. Their path to the Finals was fairly simple, losing only three games in the first three playoff rounds.

It was a Finals rematch of the previous year as they faced off with the revenge-seeking Spurs. Miami managed only one win in the series—by two points—while the Spurs won all four games by an average margin of 18 points. Allen shot the ball well during the series but wasn’t a factor. By then, he was 38-years old and no longer a focal point of the Heat offense.

The Celtics franchise turned its destiny around in 2007 when they added Kevin Garnett and Ray Allen to their team. Their win total turnaround between 2007 and 2008—they won 64 games in ‘08 compared to only 24 in ‘07—is still an NBA record, showing the league that anything is possible.

Just because they won it all doesn’t mean their path was easy. The Celts were pushed to seven games in both the first round by Atlanta and the second by Cleveland. They squeezed past Detroit in 6 in the Conference Finals, setting up a dream matchup between Kobe’s Lakers and the Celts.

Allen was spectacular in the Finals. He averaged 20 points in the series on 51% shooting from behind the arc. And he did all of this while being the Celtics’ player assigned to guard Kobe Bryant for most of the six-game series. Ray Allen had shown flashes of greatness in past seasons, but this was the first time his play translated into an NBA Title.

The NBA landscape had changed since Allen’s last title and the new Big Three—LeBron James, Chris Bosh, and Dwyane Wade—now belonged in Miami. Allen joined the Heat as a controversial offseason signing. While the decision sparked resentment from the Celtics, Allen’s fit in Miami couldn’t have been more perfect. He was their hired gun who roamed around the three-point arc and made teams who left him open pay.

The Heat were the best team in basketball in 2012-13. They blew past Milwaukee in four games, beat the Bulls 4-1, and barely got past a young and hungry Pacers team in 7 games to reach the Finals.

The Spurs were waiting in the Finals, and the series that would transpire goes down as one of the most exciting in NBA history. Allen was decent for the series, scoring around 10 points per game. However, his big moment came in Game 6 of the series, with the Heat clinging to their championship hopes by their fingernails. Allen hit the biggest shot in his career, helped the Heat win Game 6, carried the momentum to a Game 7 victory, and hoisted the trophy again.

Ray Allen played professional basketball on the highest level for nineteen seasons before hanging it up. He will forever be remembered as one of the greatest shooters to ever lace up a pair of sneakers.

His championship success was no fluke, as he played critical roles in both of his two NBA rings. Many talented players would love to strive for LeBron James-level talent for their careers. It’s hard to deny, though, that Allen’s career was littered with high points. He’s a Big East Champion, a three-point champion, and an NBA champ held in the highest regard among fans and players.

Do you remember watching any of Ray Allen’s title teams? What do you remember most about his performances? Let us know below in the comments section!