What Is A Rebound In Basketball 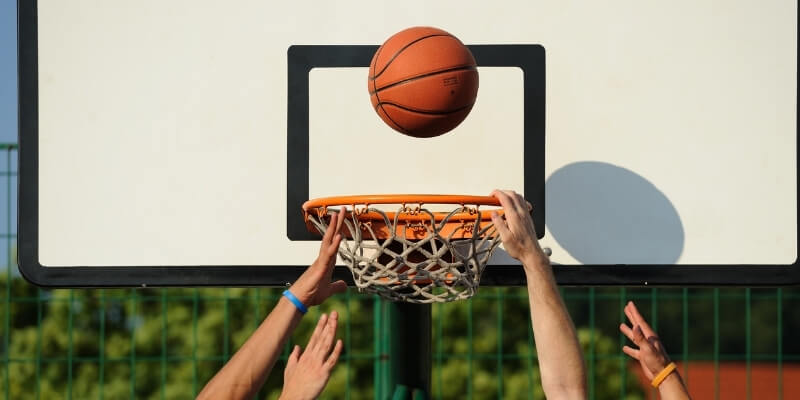 Every basketball team has members that all play different roles in order to be successful. Not everyone can be the star. Some have to do the dirty work, like play defense and rebound.

Dennis Rodman was so good at defense and rebounding that he created his own lane straight to the Basketball Hall of Fame even though he averages 7 points for his career.

But what exactly is a rebound in basketball, and why is it so important to your team to grab as many rebounds as possible? We will cover that, and more, so stay tuned!

What Is A Rebound?

A rebound, quite simply, is when a player retrieves the basketball directly after a missed shot. Any player on the court can be awarded a rebound, no matter the team for which they play.

A rebound is a very common act during a basketball game. The teams that grab the most rebounds are usually very successful.

While beating your opponent in the rebounding category doesn’t always translate to wins, the team with possession of the ball longest always has the better chance to win the game.

Why Rebounding Is So Important

Rebounding is crucial to the game of basketball in a number of situations. You can only score if you have the ball, and rebounding ensures that you have it more than your opponent.

When you are on offense and miss a shot, rebounding your miss will give you a second chance at scoring. Offensive rebounds are less common than defensive rebounds (more on that later) so any time you get one, you can count your lucky stars.

Playing defense against a team and forcing them into a bad shot is a valuable skill too. Defense takes hard work and determination, but if you force a team into a bad shot and don’t finish the play by grabbing the rebound then why bother?

Let’s say an offensive team takes a bad shot but the defense doesn’t rebound it. This gives the offense a whole new possession and is one of the most frustrating plays for a defense in basketball.

If you look at a stat sheet at the end of a game, you will commonly see that the team with the most rebounds also came out on top. We mentioned that rebounding helps you possess the ball more than your opponent.

Rebounding, on the defensive end, shows that you played good defense which usually means the other team had trouble scoring on you.

What Makes A Good Rebounder?

There are a few specific skills that will set you apart from the pack as a rebounder. You will be surprised to know that the most athletic person on the team isn’t always the best rebounder. The opposite is usually true as those athletes use their gifts to score and play above the rim on the offensive end.

Here are the best skills to have so that you are grabbing boards over the competition:

Boxing out is the act of creating a wall or border with your body between the ball and your opponent. Boxing out is simple to do, in theory, but takes a lot of effort on your part. The opponent you are looking to box out isn’t just going to stand there and let it happen, which means you have to work extra hard to make sure they don’t get to the rebound.

Here’s how it is done:

Even though you can be a great rebounder without the freakish athleticism of other players, it definitely doesn’t hurt to be able to do things on the court that others can’t. Boxing out is highly effective, but when you have an open lane to the basket and see a missed shot in the air, leaping higher than everyone to grab it sure is convenient.

Another way athleticism can help is by avoiding someone trying to box you out. If you can get around them and get the inside position, then you will be more likely to grab the board.

All Dennis Rodman wanted to do was play defense and rebound. It was that determination that led people to call him the greatest rebounder of all time. He averaged 13.1 rebounds per game over his 911 games, and always seemed to be where the ball was on a miss.

In interviews, Rodman discussed how he studied players and their shots so he would know where the shot was going to go before it even hit the rim. That shows another type of determination in the preparation that he did before games.

Determination can’t be taught. You either have it or you don’t. That is why many of the best athletes aren’t always the best rebounders. It doesn’t mean that they don’t care about winning.

Their determination is channeled into other things like scoring. Boxing out is tough to do and so is grabbing a rebound. The crowd doesn’t usually roar at the top of their lungs for a rebound, so you have to be determined on your own to work hard for a board.

We have already discussed Rodman as one of the best modern rebounders in NBA History. There are countless others over the years that are gone but not forgotten.

“The Stilt” was a dominant force in whatever statistical category he decided. He ranks #1 in NBA history in rebounds with a total of 23,924! That is over 2,000 rebounds more than the second all-time rebounder. Chamberlain was so dominant on the boards, that he once grabbed 55 rebounds in one game! That’s an average of over a rebound per minute!

Speaking of the second all-time rebounder, Bill Russell held down the paint for the Boston Celtics and their 11 NBA Titles in 13 years. Not to be outdone by Chamberlain, Russell once grabbed 51 rebounds in a game.

While Russell stands second on the all-time rebounds list, he grabbed 21,000+ in only 965 games. Chamberlain played almost a hundred more games, which made up the difference in their rebounding totals.

While a rebound doesn’t make the crowd go crazy like a big three or high-flying dunk, it is one of the most important plays during a basketball game. Rebounds help keep teams in control of a game and often lead to victory when teams out-rebound their opponents.

Rebounding takes a mix of skill, athleticism, and determination to be successful, and some of the best to ever do it simply wanted the rebound more than their opponents.

Are you the rebounder on your team? Tell us why you love grabbing boards in the comments section below!