Taking a charge is a great way to make a hustle play for your team and can quickly change the momentum of the game in the blink of an eye. I have watched countless games where an opposing team gets a fast break chance, either through turnover or rebound, and it looks like an easy two points for them. All of a sudden, a defender decides to plant his feet on the ground and get in front of his opponent to take the brunt of his charging body towards the basket.

I have also been playing basketball and have taken a charge for my team and have seen a positive reaction from everyone. My teammates jump out of their chairs and cheer me on, my coaches get excited that I made a big play for my team and I showed my toughness in the process, and our fans loved the effort as well.

As a referee, however, the charge is one of the toughest calls in the game. There are a lot of moving parts during the play that usually occurs in all of one to two seconds of play. Were the players’ feet down in time? Did he foul the other player before taking the charge? Was his body square or was it moving into the player he was trying to take the charge from? There is a lot to process before making the call and mistakes are made.

Another thing to think of was just how far under the basket the defender that took the charge was? Even though it is still tough to call, at least the NBA has a marked area on the court to ensure the players’ feet aren’t too close to the basket before taking the charge. That marked spot on the court is called the Restricted Area.

This article will dive deep into the restricted area and uncover its origins and effectiveness in the game of basketball. We will also take a look at what exactly a charge is, what taking a charge tells you about a player and some of the best charge takers in basketball. Let’s start by trying to better understand what the charge is exactly.

What is a Charge?

A charge is a play in basketball where the defender plants his feet and body in front of the offensive player and forces them to commit a foul. An offensive foul is uncommon compared to a defensive foul, making the charge an even more important foul within the context of a game.

A charge frequently occurs when the offensive player is a little out of control. A smart defender takes advantage of that and steps in front of them so that they can draw the foul.

How to Take a Charge

In order to actually take a charge correctly, there are several steps to master:

The charge always starts with your feet. They must be completely stationary and completely on the floor in order for the charge to be called.

Think of the fundamentals of a proper jump shot. One of the most important features of a great jumper is that your body is square and facing its intended target. The same principle applies for a charge, only your target is the other player running into your chest and not your shot into a basketball hoop. It’s going to sting getting hit right in your chest but is crucial for the play and helps the ref side with you when they make the call.

This isn’t strictly for male players but if you want to ensure that you don’t encounter an errant knee into your private area, be sure and cover up once you square your body to your opponent.

Yes, you will get hit hard when you take a charge and the only way to finish the play is to take the hit and fall onto your back. A coach of mine, who loved when we took charges as frequently as possible, used to say “no fall, no call”.

What is the Restricted Area?

As I previously said, the charge call is very tough to decide for a referee. The positioning of the offensive player and the defender simultaneously makes this what some sports fans call a “bang-bang” call because of how quickly they have to make the decision. The other thing the referee has to determine is if the defender is positioned too far under the basket for it to be a charge.

Why does the distance between the defender and the basket matter? Because a defender could very easily sneak into position underneath a player jumping for a layup and undercut them, which is a dangerous play. That is why the NBA put a restricted area on each side of the court located four feet outside the basket and labeled with a semi-circle, like the picture below. 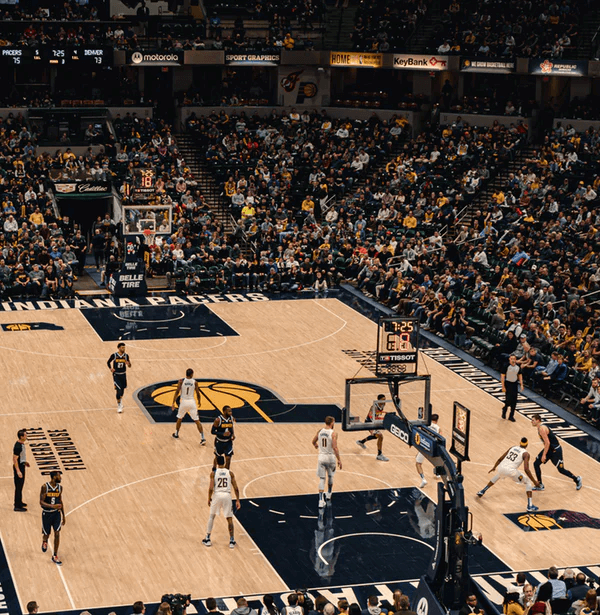 The idea is that a player must have both feet outside of that semi-circle before the opponent runs into him causing the charge. While the labeling of the restricted area is a great advantage for the referees, it is still tough to see the player run into the defender and where the defender’s feet are when the charge occurs, making this call very tough during a game.

The rule was implemented in the NBA for the 1997-98 season after seeing its benefits during International play. Initially, the restricted area was only three feet but it was changed to four feet to fall more in line with FIBA regulations (FIBA’s restricted area is 4.1 feet).

The restricted area is now used in several different levels of play, being introduced to the college game for the 2010-11 season and in women’s college basketball in 2011-12. The rule has helped with player safety and has deterred players from sneaking into position after the opponent has already left their feet. Whether it’s a charge or not, the restricted area has helped in-game play and given referees a reference point during the fast pace of a basketball game.

The restricted area has been a welcome addition within the game and has been added rather seamlessly after some getting used to by player, fans, and refs. You can tell it’s success within the entirety of the game of basketball due to the number of other leagues and skill levels incorporating it into their game as well.

While the restricted area makes the referee’s life a bit easier, it also helps the players. There is no more guesswork to be done by a player who, before the rule was implemented, may have been close to that invisible line where refs stopped calling charges and started calling a defensive foul. Either way, it is a welcome rule to the game that is already the greatest in the world.

What are your thoughts on the restricted area? Let us know in the comments!

What is a Jumper in Basketball?

What Happens if Basketball Gets Stuck on the Rim?