How Many Rings Does Robert Horry Have 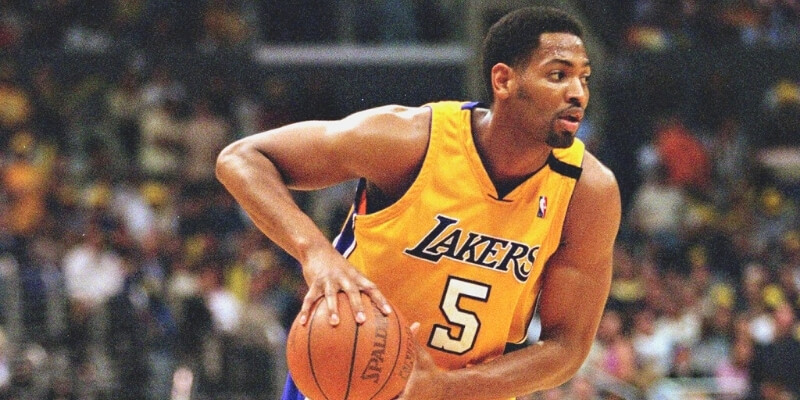 If you look up the word “clutch,” there is a good chance you will find seven-time(!) NBA champion Robert Horry’s picture next to it. Horry won his first title as a second-year player for the Houston Rockets and his last fourteen years later with the San Antonio Spurs.

The consummate role player, Horry did the little things to help his team win and also hit some BIG shots along the way. This article will highlight Horry’s insane title feat and the role he played in each one.

Horry wasn’t always the role player. As a senior in high school, he won the Naismith Alabama High School Player of the Year award. He starred for the Alabama Crimson Tide before getting selected 11th overall by the Houston Rockets in the 1992 NBA Draft.

In Houston, he was hugely successful, winning back-to-back rings in 1994 and 1995 before going to Phoenix in the Charles Barkley trade. His Phoenix stint lasted all of thirty-two games before he was sent to the Lakers.

He joined a stacked Lakers team with Kobe and Shaq. They three-peated between 2000 and 2002, with Horry playing critical roles in each title. After seven amazing years in LA, Horry signed with the San Antonio Spurs, who had just won the 2003 NBA championship.

San Antonio brought on more success: he won two more titles there before retiring after 2007. As you will see in this article, Horry’s impact on each championship win was directly felt. He hit multiple game-winners and is known as one of the most clutch performers in NBA history—an unbelievable feat, especially for someone who is a career 7-points a game scorer. They don’t call him “Big Shot Rob” for nothing.

Robert Horry’s seven titles are more than any basketball player in NBA history other than members of the 1950s and ’60s Boston Celtics dynasty. Yes, luck played a part, but he made the most of it and was a key ingredient on each title squad.

While he was only a seven-point scorer for his career, Horry always seemed to step it up a notch in the Playoffs. His first title season set the tone that Horry was someone his teammates could count on under the spotlight. He averaged 12 points in the 1994 Playoffs and was also a force passing the ball and on the boards.

The New York Knicks, who the Rockets faced in the Finals, took advantage of Michael Jordan’s 1993 retirement and pushed the Rockets to 7 games. While Horry didn’t hit any game-winners in the series, he played well. Just ask Patrick Ewing and Charles Oakley how Horry affected the series.

It didn’t take long for Horry to obtain a second ring, as the Rockets repeated in 1995. He stepped it up again under the big stage, averaging 17 points and 10 rebounds in the Finals. During Game 2, he almost had a triple-double with an 11 point, 10 rebounds, and 7 steal statline in an 11-point Rockets win.

Game 3 was classic “Big Shot Rob” and one of his first clutch shots under pressure. The Rockets were clinging to a 1-point lead with 30 seconds remaining, and the ball got kicked out to Horry from the post. Horry, having a big game already, didn’t hesitate to step into a contested three and drain it to put the Magic away.

The Rockets bested the Magic by double-digits in Game 4 for their second title in as many years. Horry was the second or third option on this team for the Finals and had just captured his second ring in just three years in the league.

It took Horry a move to LA and five more years to win his third title. The Lakers had the best record in the league in 2000 and came into the playoffs heavy favorites to win it all. They had to get through the Western Conference, and many believed anyone who made it out of the East just couldn’t match up with Shaq and Kobe.

They were right—sort of. The Pacers gave the Lakers all they had, but it just wasn’t enough in the end. While Horry’s role on this Lakers team had diminished slightly, he still averaged 22 minutes per game.

The 2000-01 Lakers were a different breed of champion, steamrolling through the playoffs without a loss entering the NBA Finals. The 76ers were waiting for them but didn’t have near the firepower that LA brought to the table.

The Sixers surprisingly took Game 1 from the Lakers behind a 47 point performance from Allen Iverson. After that, the Lakers looked dominant on their way to a repeat title. Horry averaged 25 minutes in the Finals and added some more late-game theatrics to his legacy in Game 3. The Lakers were holding on to a one-point lead with under a minute to play when Horry hit the dagger three to give them a big win and push the series to 2-1.

Could the Lakers defy all odds and three-peat in 2002? The answer was yes, but not before some tough early-round series.  In the Western Conference Finals, the Lakers went up against the toughest challenge of their three-year dynasty in the Sacramento Kings. The Kings pushed them to a tough seven-game series win, but not after some clutch performances were needed from “Big Shot Rob” again.

The Lakers staged a huge 20-point comeback in Game 4 of the Conference Finals. It all came down to the final play of the game, with the Lakers down 2. Several shots around the rim were missed, and the ball got tipped out to a wide-open Horry for three—who nailed it.

After the Lakers barely got past the Kings, the Nets in the Finals were no match for them. They swept New Jersey, completing their unbelievable three-year run. Horry, who only averaged 8 points in the Finals, had just captured his fifth ring.

Horry saw his overall production drop when he went to San Antonio, but his team’s success was still positive. The Spurs were pushed to the brink in every playoff series, especially against Detroit, who won it all the previous year.

Game 5 sticks out as one of the finest performances in Horry’s career. He scored 21 points in the fourth quarter and hit the game-winner in OT—a phenomenal display. The Spurs took care of the Pistons in Game 7 to win their third title in seven years—and Horry’s sixth career ring.

Robert Horry’s big moments were behind him by 2007. He would only play one more year after that, but he had one more title run with the Spurs in his tank. San Antonio looked unstoppable in the 2007 Playoffs, losing only four games out of 20.

In the Finals, the Spurs faced the extremely overmatched Cleveland Cavaliers, led by a young LeBron James who wasn’t quite at the peak of his powers.

The Spurs handled the Cavs easily in a four-game sweep. Robert Horry was now a seven-time champion. He won his first title in 1994 and his last 14 years later in 2007.

Robert Horry will be remembered as one of the most accomplished winners in NBA history. He never made an All-Star team, and he would never average more than 12 points. But there are players who had made an All-Star team or two that would trade their careers with Horry. Calling “Big Shot Rob” a winner is an understatement.

Do you remember some of Horry’s heroics? Let us know your favorite Robert Horry moment in the comments below!