How Many MVPs Does Russell Westbrook Have? 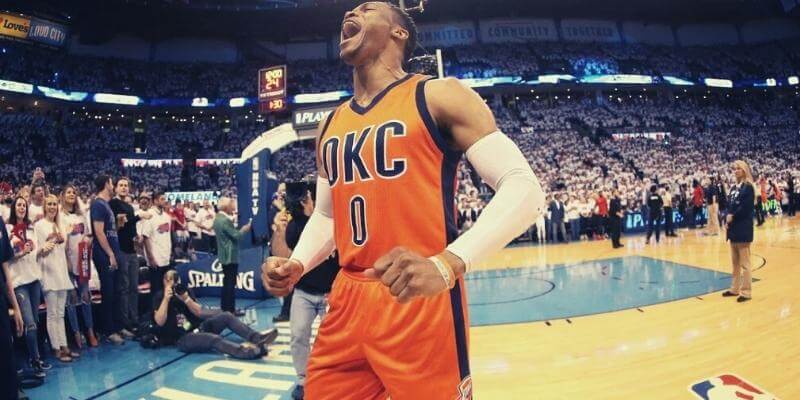 There are few higher accolades in the NBA than an MVP award. Not only does it put a player above so many other superstars across the league, but almost every single MVP winner is in (or will be in) the hall of fame. Having one is a big deal.

There aren’t many players who have earned the trophy, but Russell Westbrook is one such individual. The following article looks at how many he has, where he got them, and the reason he was able to outperform so many other excellent athletes.

One of the Best

When it comes to individual performance, nothing shines quite like an MVP. The accolade means a lot, and shows a level of skill that few ever truly reach. A player can’t just be great, they need to have a truly outstanding season.

Throughout NBA history there have only been 35 MVP winners. That low number makes it one of the most prestigious lists in all of sports, especially when considering all of the fantastic greats who managed to win multiple in such a short span.

Even today, most winners usually get more than one. It’s extremely rare for a player to sneak in among the perennials with an amazing season. However, that’s exactly what Westbrook did.

Top, but Not the Best

Westbrook made an immediate impact in the NBA. He was a high draft pick, quickly adapted to the professional speed, and thrived in the Thunder’s high powered offense. That allowed him to climb the ladder and become one of the league’s elite in a very short amount of time.

Unfortunately, as great as he was, all of his stats didn’t add to much. He got a lot of triple doubles, put up impressive stats on both sides of the ball, and helped get the Thunder to the Finals. Without a championship or stand out season, it didn’t get him noticed.

Most fans and players only saw Westbrook as an all star during his first nine years in the NBA. That’s not a bad place to be in, but it’s not something that separates an athlete from the pack. To stand out, he needed to do something special.

Not only did Westbrook not have an MVP reputation, but he was also fighting against truly incredible seasons from Stephen Curry and Lebron James. Still, he managed to overcome both of those obstacles by putting himself into the record books.

He finished the year averaging 31.6 points, 10.7 rebounds, and 10.4 assists. That made him just the second player since Oscar Robertson in 1961 to average a triple double for an entire year. It was an impressive feat, and one the MVP voters simply could not ignore.

At that point, after nearly a decade, Westbrook finally earned his MVP. It’s the only one he has, but it helped push him over the edge from a strong player who couldn’t get the job done to one of the elites.

Westbrook may only have one MVP trophy, but that’s enough. His 2016 season is one of the best ever, and it’s rightfully immortalized in history. He might never get a ring, but he will likely be in the hall one day. His MVP is a big reason why.