How Many Teams Has Russell Westbrook Played For? 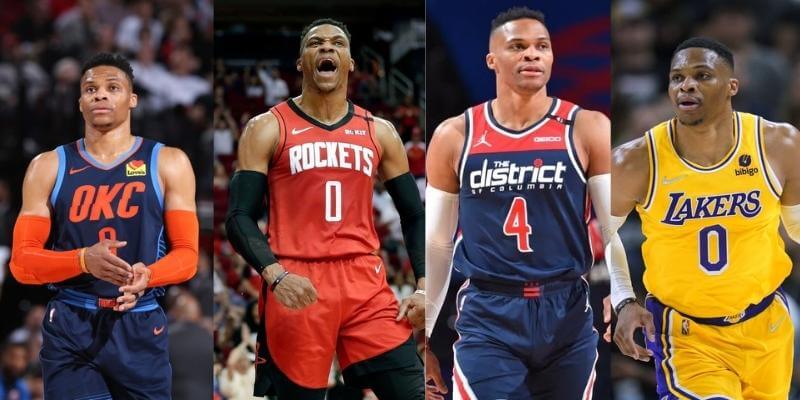 The NBA is an ever-changing league. While some players are lucky enough to stick with one franchise for their entire career, most players move around quite a bit. That’s true of bench players, it’s true of all stars, and it’s true of Russell Westbrook.

Throughout the following sections I will look at the guard’s stellar career by analyzing the 4 different teams (Thunder, Rockets, Wizards, and Lakers) he’s played on while in the NBA. That won’t just show his own journey, but it will also reflect on how hard it is for even the best to stay with one franchise.

A Long (and Losing) Battle

It is a truth of life that age catches up to everyone, and that includes great athletes. Top NBA players can stick around the league for a decade or more, but staying in the same place for that long is no easy task. Especially if their organization isn’t on the winning side of things.

Most of the time, athletes’ productivity declines and teams trade them. However, even if they still put up great stats, a player might leave a team due to personal disagreements, unusual circumstances, or they might simply want a change of scenery.

Westbrook experienced a few of those, and it’s why he’s traveled more than most other top players.

A Decade of Thunder

Westbook didn’t have a huge impact in college, but he still went to the NBA with big expectations. The Sonics (soon to be Thunder) took the high flying guard third overall in the draft, and they did so expecting him to team up with Durant to take over the franchise.

The pair, alongside great role players and James Harden, brought great success to the city. They won tons of games, had a Finals appearance, and challenged for the Western Conference crown year after year. It wasn’t long before the Thunder saw Westbook’s value.

Not only did they turn him into a perennial starter, they signed him to several long contracts and committed to him being a cornerstone of the franchise. While that was true for many years, it didn’t last.

Westbrook stuck it out on the Thunder for eleven years, but age and circumstances eventually caught up to him. After going so long without winning a ring, the Thunder traded him in 2019.

For most of his career, Westbrook was synonymous with the Thunder. Once he left, it didn’t take him long to become a journeyman. His first stop was in Houston, where he joined back up with Harden and tried to forge a championship team with his old teammate.

Unfortunately, the experiment didn’t work out. After losing in the second round of the playoffs against the Lakers, Westbrook and Harden both complained about the way they were being handled by Houston. Their relationship with the franchise quickly soured and they moved on.

From there, Westbrook ended up on the Wizards. He played well, but it wasn’t enough. The Wizards made the playoffs with him at guard, but they were bounced in the first round. After yet another disappointing end to the season, Westbrook moved on again.

He went to the Lakers in 2021, and that’s where he is right now. The athletic guard has been on four teams during his time in the NBA, and three of those came in the last three years.

It doesn’t take much for perception to change. In just three years Westbrook went from one of the most steadfast players in the NBA to a multi-team journeyman. There’s no telling where he’ll go next, but if he does go anywhere history shows it will be somewhere he thinks he can win.