How Many Rings Does Scottie Pippen Have 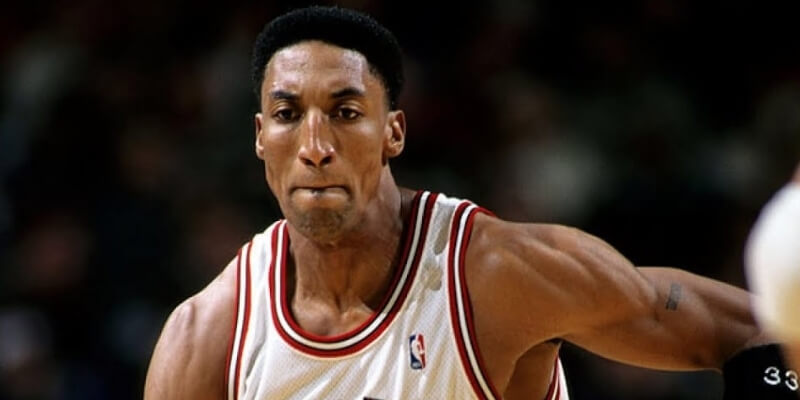 When you remember the 6 NBA titles won by the Chicago Bulls in the 1990s, one name fills your memories: Michael Jordan. But another guy was just as critical to those Bulls teams: 6’8” jack-of-all-trades Scottie Pippen.

Some would call Pippen the Robin to Jordan’s Batman. I argue, though, that he played a much significant role. He could do it all on the court and was the perfect complement to Jordan’s game.

This article will highlight Pippen’s career, those 6 championship runs, and dissect just how vital he was to those title teams.

Scottie Pippen was never supposed to make it this far. He was only 6’1” when he graduated high school and didn’t get any attention from big college programs. He entered the University of Central Arkansas as a walk-on and grew to 6’8” while he was there. By the end of his college career, he averaged 23 PPG and 10 RPG, earning NAIA All-American honors.

Wisely, the Bulls moved up in the 1987 NBA Draft to select Pippen 5th overall. Michael Jordan needed help in Chicago as his individual accomplishments weren’t translating to team success yet. That would change quickly: the Bulls jumped from 8th place in the East to 3rd place during Pippen’s first year with the team.

Pippen brought a lot to the Bulls organization when he arrived—his scoring, passing, and rebounding ability. But the two biggest positives were his ability to take the pressure off of MJ without losing control of the game and his consistent locking down of the other team’s best player on defense.

During his first five seasons in the NBA, Pippen’s scoring average improved from 7.9 to 21. his RPG average jump from 3.8 to 7.7, and his assist numbers also skyrocketed from 2 to 7 per game. The Bulls, as a team, improved each year as well, going from contenders to champions by Scottie’s fourth and fifth year in the league.

From 1988-1990, the Bulls lost to the Detroit Pistons. The Pistons were established in the league, and the Bulls were still learning how to win during playoff time when it mattered most. Once they got over the Piston hump, though, they dominated the league.

Between 1991 and 1998, the Bulls captured 6 titles. 1994 and 1995 were the only missteps when Jordan “retired” and followed his lifelong dream of becoming a pro baseball player. However, during that time, Pippen took an underrated Bulls squad to two straight playoffs and became the focal point of the team’s offense.

Pippen then spent time in Houston and Portland, still averaging double-figure points, before ending his career back in Chicago, where it all started. You will see in the following Finals recaps just how crucial Scottie Pippen was to the Bulls organization during the “Jordan years.” MJ might have never been the GOAT if it weren’t for his sidekick.

The Bulls put everything together during the 1990-91 season and came out like gangbusters for the ‘91 Playoffs. They entered the playoffs that year as the best team in the East and with the second-best record in the NBA.

While LA was a formidable force, it seemed like a foregone conclusion that the Bulls would roll. Pippen performed admirably, putting up 21 points, 9 rebounds, and 7 assists. He even outscored Jordan in the deciding game. The Bulls were champs and would begin a run that nobody had seen since the ‘50s and ‘60s Celtics.

The Bulls rolled through the 1991-92 regular-season, winning a league-high 67 games. Pippen averaged 21 points on 50% shooting and was stellar on defense. He picked up his first First-Team All-Defense honors. He was recognized in the league as a highly impactful player—not just Jordan’s sidekick.

While the regular season was a walk in the park, the playoffs proved a bit more difficult for the Bulls. They swept the Heat in round 1, survived a 7-game war with the Knicks, and took six games to beat the Cavs.

Their job wasn’t over yet: the Bulls faced the tough-as-nails Portland Trailblazer squad in the Finals. Jordan got a lot of the hype and had some tremendous performances. Pippen, however, played some of his best basketball to date. For the series, Pippen dropped 21 PPG, 8 RPG, and 8 APG on his way to his second title in as many years. The Blazers put up a good fight but just didn’t have the firepower to match Jordan, Pippen, and the rest of the Bulls.

The question entering the 1992-93 season was, “can the Bulls do it again?” According to their two stars, who had just come off a historic Barcelona Olympics as members of the Dream Team, the answer was “of course.” However, they did stumble out of the gate, notching only the second-best regular-season record in the East.

That didn’t matter much in the early playoff rounds, as they swept both the Hawks and Cavs to set up an Eastern Conference Finals matchup with the Knicks. New York seemed to have had Chicago’s number, winning the first two games of the series. The Bulls didn’t panic and rattled off victories in the next four games. Pippen was a considerable factor, averaging 23.5 PPG in Games 3 through 6.

The Finals weren’t a cakewalk. Chicago found a young and hungry Suns team, led by Charles Barkley, waiting for them. Phoenix went down 2-0 after 2 games and was never really a threat, even though they won Games 3 and 5 in Chicago. Jordan and Pippen were out of this world, carrying the Bulls averaging 41 points and 22 points, respectively. Pippen nabbed a triple-double in Game 2 and flirted with three more across the series.

The 1995-96 season was one for the ages for the Chicago Bulls. They won a then-league-wide record of 72 games and cruised through most of the playoffs. The Bulls had just come off of two mediocre years, with Jordan leaving for all of the ‘94 season and coming back in ‘95 rusty. Many wondered if the Bulls would get their mojo back. The first full year with Michael and Scottie back together silenced critics.

The Bulls ran into a young athletic Supersonics team in the Finals. They were never really in danger, even though Seattle rattled off two straight victories to cut the series lead to 3-2 in favor of Chicago. Pippen struggled shooting in the series but was still a playmaker on the glass and made key assists to teammates. Chicago was back on top, but for how long?

The Bulls shot out of the gates in 1996-97, going 17-1 to start the year. They leveled off but still won 69 games heading into the playoffs, another year in which no Eastern Conference team challenged them en route to the NBA Finals. They were set to face a different foe in the Utah Jazz, led by John Stockton and league MVP Karl Malone.

The Jazz thought they had someone in Byron Russell who could stop Jordan. Pippen was slowed from a foot injury in the Eastern Conference Finals but still played the entire series and put up terrific stats: 20 PPG and 8 RPG. His most impressive play came in the last play of the series, when he tipped a pass away from the Jazz, leading to a dunk and the clinching basket for the Bulls.

The Bulls limped into the 1997-98 season amidst rumors that it was the last year of the Jordan, Pippen, and Coach Phil Jackson marriage. Pippen had surgery on his foot, was in contract talks, and missed half the season. The Bulls felt Pippen’s absence but still finished tied for the best record in the league with the Jazz.

The Bulls swept the Nets and Hornets in the first two rounds of the playoffs. Still, they ran into a tough test against the Reggie Miller-led Pacers in the Eastern Conference Finals. Chicago went up 2-0, and the Pacers answered with two wins of their own. They split the next two games to force a Game 7, which the Bulls ultimately won. The Utah Jazz swept their Western Conference foes to set up a rematch of the 1997 Finals.

This series would always be remembered as Jordan’s “final” season before retiring (for the second out of three times). The Jazz were tough competitors again, winning Games 1 and 5, but Jordan, Pippen, and the rest of the Bulls were too good—and they had destiny on their side. Pippen struggled shooting the ball for most of the series but had some terrific moments and played consistently throughout.

If Scottie Pippen hadn’t played alongside the greatest player in basketball history, his individual impact on the game of basketball might have been more significant. But Pippen was the ultimate teammate. He did whatever was needed to win, which usually meant playing in the shadow of Michael Jordan. For his efforts, however, he will be known as one of the most outstanding teammates ever.

He is also one of the greatest winners in NBA history with his 6 rings and Hall of Fame resume.

What Scottie Pippen performance do you remember most? Let us know in the comments below!