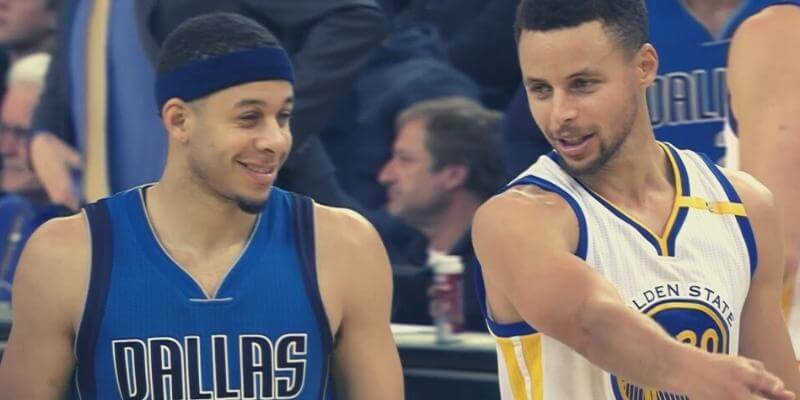 Stephen Curry is one of the most impressive NBA players of all time. He’s the best shooter ever, brought the dead Warriors franchise back to life, and will undoubtedly go down as a top five legend. While his brother Seth Curry isn’t quite on the same level, he’s still impressive in his own right.

The below article looks at both Currys, as well as the different paths they took to get to the NBA. Both might be related, but when looking at their stats and prestige, it’s apparent they could not be more different.

The Bigger (and Better) Brother

Stephen Curry is one of the most famous players in the world, and has a name that’s synonymous with basketball. However, it wasn’t always that way. He went to a relatively small college (Davidson) and even after his impressive tournament run he had plenty of doubters.

He was undersized, didn’t have a set niche, and seemed a bit too small for NBA defense. Despite that, the Warriors still took him seventh overall in the 2009 draft. They saw something no one else did, and it paid off in a big, big way.

He’s been a key piece of one of the greatest dynasties of all time, and he completely changed the way basketball is played. He paved the way for pure three shooters, and led the recent shift to spread offenses. The league will never be the same because of him.

While Steph’s legacy is forever cemented, his brother doesn’t have quite the same fanfar. Though he played well at Duke, it was immediately clear Seth lacked his brother’s talent or shooting ability. As such, he went undrafted.

Steph came into the league and made an impact almost right away. In contrast, Seth went through a much tougher uphill climb. The Warriors signed him to a preseason deal, no doubt because of his name, but he got waived after only playing in six games.

From there he went to the Grizzlies in 2014 before being bounced back to the G League. He then played a few games for the Cavaliers, the Magic Summer League team, as well as their G League affiliate. He signed with the Suns on a 10-day contract, but went back down after.

It was there in 2015 where he changed his career. He played extremely well in the G League, averaging 23.8 points, 3.9 rebounds, 4.2 assists, and 1.4 steals a game. That growth showed he was good enough for the NBA, and he’s been in the league ever since.

Seth and Steph are both NBA players, but they are on very different ends of the spectrum. Where Steph is a perennial all-star with four rings and a franchise under his control, Seth is a journeyman who’s played for nine different teams during his eight year career.

That alone shows how split their paths have been. However, despite their differences, they each play in a similar way. Seth grew up in his brother’s shadow, so it’s no surprise that he learned a lot from his game.

Both are deep shooters who make their living scoring. Steph just scores more and at a much higher rate. Even so, Seth and Steph each get a lot of mileage out of their three shooting. They work to stretch the floor and use quickness to their advantage.

Seth’s high averages may seem surprising, but it’s because Steph shoots (and scores) much, much more. When it comes to other stats, Steph averages 4.6 rebounds, 6.5 assists, and 1.7 steals to Seth’s 2.2 rebounds, 2.2 assists, and 0.7 steals.

Those are perhaps more important than shooting because they show how much more of an impact Steph makes. Seth is a good player in his own right, but when going up against his brother there’s simply no contest.

Stephen Curry is undoubtedly a hall of famer. While his brother isn’t quite on the same level, he’s much better than people expected as well. He started much more slowly, and came in with less expectations, but he’s been able to carve out his own space in the league.

Comparing the two, it’s not even close. Steph is much, much better. However, it’s pretty rare to have two siblings both succeed at such a high level for such a long time. They both have a lot left in the tank and will likely continue to play for years to come.