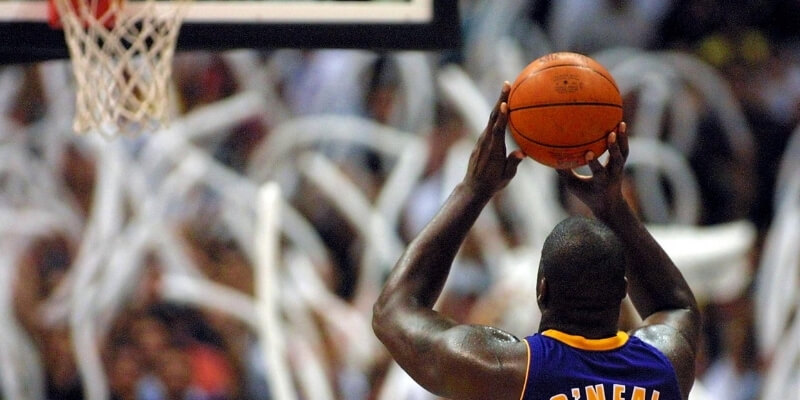 Shaquille O’Neal will go down in NBA history as one of the most dominant big men ever to play the game. One aspect of his game that has never been referred to as dominant is his free throw shooting.

Over nineteen seasons in the NBA, Shaq shot 52.2% from the foul line. That’s not good. What makes things even more uneven is the fact that Shaq’s field goal percentage for his career was almost 59%. That’s 7% better than those “simple shots” from the charity stripe.

Many fans wondered why Shaq, who put up commanding Hall of Fame numbers in almost every other statistical big man category, could never wrap his head around the skill of the free throw.

This article will dive into Shaq’s misfortune at the charity stripe and break down his history with the one thorn in his side during his storied career.

Shaq vs. Free Throws: Why Was He So Bad?

In today’s NBA, it isn’t uncommon to see a seven-footer with a three-point shot in their arsenal. Shaq was fortunate not to have played today, although he probably would have worked on his threes more than he did as a general practice.

His era was more reliant on a dominant post player, like himself, to succeed. Who knows though, maybe Shaq would have had a great three-point shot after a lifetime of practice!

Sure, Shaq didn’t shoot threes much or excel in passing the ball, although he was a bit underrated in the skill. The fact is he didn’t have to. His game was to get in the paint, post up, and drop step on his man on the way to dunking him into oblivion.

Free throws, however, are a part of the game that no one can avoid. Especially a seven-footer like Shaq who got fouled virtually every time he touched the ball.

O’Neal shot over 11,000 foul shots during his NBA career, making around 5,900 in total. So, why did he never improve significantly in this category if he shot so darn many? Let’s dissect.

Also Read: What is a Brick in Basketball (Hall of Fame Bricklayers)

Let’s start with the basics: Shaq’s shooting form. Take a look at it this video, as he almost knocks the rim down with this brick.

The first thing is his legs. He bends his knees multiple times before shooting causing a couple of different stops and starts. As a free throw shooter, your motions should be fluid and natural.

Shaq also doesn’t have his hands in the right place either. The ball looks to be resting on his palms and not his fingertips or the pads of his hand. You notice the shot was short and this little detail that he missed could have played a big part.

Also, his left hand, or “guide hand” that keeps the ball in place on your shooting hand, isn’t touching the ball. Granted, a basketball probably feels like a tennis ball in Shaq’s hands.

The last big problem is the arc on Shaq’s free throw. The shot barely gets over the rim, which is why it was so quick to clang off the front of it.

If your form and follow-through are not great then your arc must be awesome for any chance. Two basketballs can fit into the rim at once, meaning that if Shaq puts more arc under the ball, it increases his chances of making it, even if he is a little off.

While the name is coined after him, getting intentionally fouled for multiple possessions because of how bad your free throw shooting was didn’t start with Shaq.

This practice goes all the way back to another famous dominant big man, Wilt Chamberlain. Teams would literally chase Chamberlain, a career 51% FT shooter, around the court attempting to put him on the line.

In the ‘90s, Dallas Mavericks coach Don Nelson began incorporating the intentional foul into his late game plans if the other team had a really bad shooter on the court.

Enter Shaq, who played countless big playoff games during his career, and you would have thought the act of fouling the worst shooter was built for him.

Greg Popovich, the legendary coach of the San Antonio Spurs, fouled Shaq so much during the mid-aughts that fans began complaining about the act.

The act has been used on players since, but utilizing Hack-a-Shaq is more taboo and frowned upon in NBA circles.

How Shaq Measures Up

I have a Mount Rushmore of bad free throw shooters and, unfortunately for Shaq Diesel, he’s on it. The combination of poor form, the Hack-a-Shaq strategy, and him failing the eye-test miserably, it’s impossible for him not to be on it.

I think I have given Shaq a hard enough time, so let’s take a look at the others on my list.

Anyone who misses more shots than they make from the line has to be mentioned. Drummond’s name appears three times on the list of worst free throw shooting seasons ever. That is tied for most spots in the top ten with the next guy.

Ben Wallace holds the record for the worst free throw shooting season ever hitting only 33.6% of his foul shots for the 2000-01 season. He finds himself in the top ten worst seasons at the charity stripe three times total.

Not many players miss foul shots in so many ways as Wallace did. This clip shows two ways – an airball to the left and a thud off the back of the hoop.

Jordan is another victim of the Hack-a-Shaq rules, and you can tell by his career percentage the strategy paid off plenty.

Jordan’s worst season behind the line so far is 2012-13 when he made less than 40% from the stripe on a Clippers team who actually had a successful year despite his performance.

Whenever I think about free throws, I always remember a scene from the 1986 film, Hoosiers. The movie is about Indiana high school basketball and the ultimate Cinderella story, the “Milan Miracle”.

During the movie, the coach (played by the amazing Gene Hackman) brought the team out to the arena court they would be playing – a far cry from their little high school gym – to show them that the free throw line was still 15 feet from the hoop, which was still 10 feet.

A free throw is the ultimate equalizer in sports. Whether you are Shaquille O’Neal or a youngster playing youth basketball, the shot is the same. Fifteen feet away on a ten-foot hoop. It’s a wonder Shaq didn’t get better at them, but he just didn’t.

There were many factors, but Shaq’s free throw percentage simply didn’t match the rest of his game.